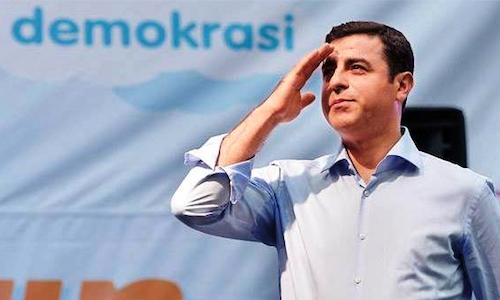 BACKGROUND:  On November 4, nine parliamentarians of the pro-Kurdish and moderately leftist Peoples’ Democratic Party (HDP), including the co-chairmen of the party, Selahattin Demirtaş and Figen Yüksekdağ, were arrested. A week earlier, the two HDP co-mayors of Diyarbakır, the main Kurdish city of Turkey, had been arrested. On November 6, the HDP announced that it will no longer participate in the workings of the parliament.

On November 5, nine editors and board members of the left-of- center daily Cumhuriyet, who had previously been detained, were arrested, while two of the editors of the daily who had been detained on October 31 were set free pending their trial.

The HDP parliamentarians and party leaders are accused of being in collusion with the militant Kurdistan Workers’ Party (PKK), which has fought the Turkish state since 1984. The journalists and board members of Cumhuriyet are accused of having served the cause of both PKK and the so called Fethullah Gülen terror organization (FETÖ). Ironically, the prosecutor himself is accused of being a Gülenist, and the minister of justice deplored that the case had been entrusted to him.

President Erdoğan endorsed the Cumhuriyet arrests, claiming that the newspaper had supported terrorism; Prime Minister and Justice and Development Party (AKP) leader Binali Yıldırım told the arrested HDP politicians not to complain, saying that the rule of law applies to everyone. But the arrests enjoy the backing of the far right Nationalist Action Party (MHP) as well. Erdoğan is seconded in his repression of the Kurds and of the left by MHP and its leader Devlet Bahçeli.  The MHP leader stated that “It is not credible that those who have inflicted the worst damage on the values of the republic – while using the name republic – and who encourage the forces that oppose Turkey, hide behind media freedom.”

By tradition, the “fate of the state” is of primary concern for the MHP. The party’s supporters are also strongly represented in the state bureaucracy and Erdoğan has come to increasingly rely on them after the coup attempt this summer and the ensuing mass purges of the bureaucracy. AKP and MHP are now joining forces to introduce a presidential system, and are also exploring the re-introduction of capital punishment.  Bahçeli’s motive for offering his services – helping Erdoğan amend the constitution – is his belief that raison d’état calls for it. From the perspective of the nationalist right, restoring the authority of the state, in the wake of the coup attempt and the political ascendancy of the Kurdish movement, is imperative.

IMPLICATIONS: In an open letter to the Turkish president, Can Dündar, the former editor of Cumhuriyet, who is now in exile in Europe, asked Erdoğan “What drives you to insanity?”  In fact, the “insanity” – the repression of the Kurdish political representatives and of the left – is a long-standing Turkish state tradition. The arrests of the HDP politicians are a re-run of the imprisonment of Kurdish parliamentarians in the mid-1990s, while the nationalist, rightist authoritarian front that the AKP and MHP has formed is reminiscent of the 1970s, when conservatives, Islamists and the extreme right formed “Nationalist front” governments in response to the rise of the left.

The HDP is the third biggest party in the Turkish National Assembly, with fifty nine seats. The party received five million votes in the latest general election of November 2015. The party is supported by a majority of the Kurdish voters in the southeastern, Kurdish part of the country, but it is also supported by part of the Turkish left and by Turkish liberals.

Cumhuriyet is Turkey’s oldest newspaper, published since 1924. It owes its name, which means republic in Turkish, to a suggestion that was made to its founding editor by Kemal Atatürk, the first president of the country. The editors who have now been arrested are an ideologically heterogeneous group. Some are liberals, others are socialists.

The list of the constituencies that Cumhuriyet has offended over the years is long: it has been anathema for rightists, Islamists, the communist left and liberals alike. In 2008, the publisher of Cumhuriyet was detained and put to trial, accused of being a member of the “Ergenekon terror organization.” The Gülenist prosecutor who was in charge of that operation is now on the run from an arrest warrant. In 2008, the AKP government and its Gülenist allies in the police and the judiciary operated on the assumption that the newspaper was seeking to incite the military to stage a coup. Indeed, one particular article infamously claimed that “The young officers are worried.” The daily has since remained a nuisance for the AKP regime, albeit in an ideologically different sense.

When Can Dündar became editor-in-chief in 2015, its profile changed from die-hard Kemalist to more liberal, especially in the Kurdish issue. The Kemalist old guard complained that Cumhuriyet was now reserved for Gülenists and PKK supporters. (Actually, the Gülenists strongly opposed the earlier, liberal policies that AKP pursued in the Kurdish issue and were in that sense closer to the Kemalists.) Cumhuriyet in particular drew the ire of the regime when it reported on how the Turkish National Intelligence Agency (MİT) transported arms to the rebels in Syria. The traffic was exposed when a prosecutor, allegedly a Gülenist, ordered the police to stop and search the trucks of MİT.

Another daily, the now defunct liberal Taraf, had for years served the purposes of the Gülenists when it disseminated what turned out to be fabricated revelations about alleged coup plots in the military that legitimated trials that helped the Gülenists gain near-control of the armed forces. Erdoğan apparently imagined that the new, liberal Cumhuriyet could be or was being used against him by the Gülenists who had earlier demonstrated their ability to co-opt liberals. After the arrests last week, one pro-AKP pundit wrote that she is looking forward to the newspaper being returned to what she described as its “rightful owners”, the Kemalists.

Kemalists and Islamists obviously diverge on the question of secularism, but today the former foes nonetheless tend to embrace the AKP-MHP nationalist front as a bulwark against the aspirations of the Kurds. Indeed, the Kemalist Republican People’s Party (CHP) was instrumental in paving the way for the arrests of the HDP parliamentarians; in May, its leader, Kemal Kılıçdaroğlu, instructed the CHP parliamentarians to vote for the proposal of AKP and MHP to abolish the immunity of the members of parliament, knowing very well what the next step would be. Not all CHP parliamentarians followed the instruction, but critically, enough of them did.

The CHP has nonetheless criticized the arrests of the HDP parliamentarians, stating that the AKP government has done terrorism “a service by arresting members of parliament.” Erdoğan reacted sharply to the statement of CHP.  He said that “those who commit treason in this country, those who defend the promoters of terrorism, will pay the price for this, they have to pay for it, they will pay for it.” MHP leader Bahçeli similarly threatened the CHP, stating that “It is a black stain that the CHP supports the traitors. It is difficult to explain that those who pursue politics on the platform of democratic legitimacy have joined this choir,” ominously intimating that CHP has thereby excluded itself from the platform of democratic legitimacy.

CONCLUSIONS: Before he was arrested, HDP co-chairman Demirtaş made a plea for the formation of a “democratic bloc” that would stand up against the ruling “fascist bloc.” “Why should it be impossible for those who call for equality, brotherhood to get sixty percent of the votes? Why can’t we come together and form a democratic bloc? Are we condemned to a fascist bloc?” he asked. Demirtaş was addressing the CHP, which has showed little interest in such a leftist alliance with HDP. The CHP is the founding party of Turkey, and it is beholden to a nationalism that trumps social democracy. The same is also true of HDP, which above all represents Kurdish nationalism. Fatih Yaşlı, a leftist academic and writer, argues that what is required is the emergence of an independent leftist force, which would pull the CHP and HDP into its orbit.  The absence of a broad, democratic left condemns Turkey to being ruled by an authoritarian right, whose hold over the electorate has become even stronger.

The “Nationalist front” of Recep Tayyip Erdoğan and Devlet Bahçeli speaks to the sensibilities of the vast majority of Turks; it mobilizes a conservative national unity under the banner of Islam and Turkish nationalism. However, it is a destructive unity which comes at the expense of liberty and which ultimately may not serve the cause of a united Turkey.