Çalışlar: AKP and HDP cooperation to be reborn

Oral Çalışlar in Radikal writes that it is highly likely that various coalition formulas are going to be discussed after November 1, just as was the case after June 7, and that the AKP is once again going to be at the center of these. [HDP co-chair] Demirtaş has made the assessment that "the AKP needs to change itself." It is a fact that this assessment points toward an interesting potential. Whatever happens, Turkey is ultimately going to return to the solution process [of the Kurdish issue]. The discussions about disarmament and about democratization projects are going to resume…  For that to happen, and for the discussions to continue once they have started, AKP and HDP, as in the past, are going to have to put in work hours together. If the AKP does not get a majority, there is inevitably a coalition on the horizon.  It is useful to be open to new experiences, to new searches and to be courageous. 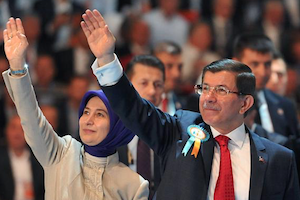 Published in What the Columnists Say
Read more...
Page 15 of 45