BACKGROUND: When Erdoğan first became prime minister, he was careful to avoid confrontation. Publicly, he insisted that he had discarded the firebrand Islamism of his youth in favor of a moderate, pluralistic conservatism. Skeptics remained unconvinced, claiming that Erdoğan was being disingenuous and merely biding his time. The previous regime had tried to squeeze a highly diverse society into a homogenized and theoretically secular, ethnic Turkish straitjacket. Their fear was that, once he felt strong enough, Erdoğan would attempt to impose a homogenized, Sunni Islamic one.

In time, the skeptics were proved right. As he consolidated his power, Erdoğan became not only more authoritarian and autocratic but also more explicit about his goal of reshaping Turkish society in accordance with his own Sunni Islamic beliefs. But, faced only with a flaccid and ineffectual opposition, Erdogan was able to dominate the political landscape, using his keen political instincts and bludgeoning rhetoric to build a strong electoral powerbase amongst the mass of the people.

In June 2011, the AKP won its third successive general election, securing 49.8 percent of the vote. Unchallenged and seemingly unchallengeable, Erdoğan started to advocate replacing Turkey’s parliamentary system with a presidential one – and indicated that he would run as a candidate to replace President Abdullah Gül, whose term in office is due to end in August 2014, and then serve for two successive five-year terms.

In November 2011, Erdoğan underwent emergency surgery for the removal of a malignant growth in his intestines. He had a second operation in February 2012. He is now heavily medicated and subject to frequent health checks. The expectation is that his cancer will return. The prognosis is uncertain.

The impact on Erdoğan of the medication and the reminder of his own mortality remain unclear. But, over the last 15 months, he has become more impatient, irascible, authoritarian and hubristic. For someone whose ability to gauge the public mood once made him the most accomplished Turkish politician of his generation, Erdoğan has also started to look dangerously out of touch. Yet the more detached he has become, the more Erdoğan has appeared to regard himself as the embodiment of the national will – with an electorally endowed right to issue the final word on almost every issue, from the number of children that women should bear to the costumes and scripts of television soap operas and Turkey’s national drink, which he announced in April 2013 was ayran or “buttermilk”. No one else was consulted.

In early May 2013, Erdoğan announced plans to restrict sales of alcohol and ban its advertising. The resultant law was rushed through parliament in the early hours of May 24, 2013. As Turks slept, Erdoğan inserted a number of last minute changes. One of these requires any depictions of alcoholic beverages on television to be blurred on the grounds that they endanger public health by encouraging people to drink alcohol. The scientific basis of this conclusion remains unclear. However, if Erdoğan genuinely believes that viewers will imitate what they see on television screens, it is difficult to understand why he has not made it compulsory to blur depictions of guns and knives, particularly when they are shown being used to kill people. 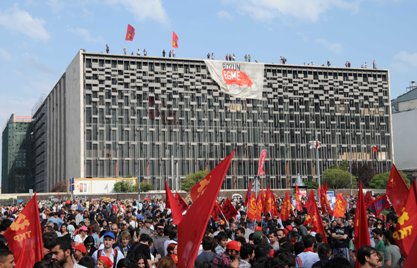 IMPLICATIONS: Erdoğan has also sought to reshape Istanbul with a series of massive infrastructure projects worth over $80 billion. They include a new airport, a third bridge across the Bosphorus and even an artificial canal linking the Black Sea to the Sea of Marmara. Erdoğan has also put forward Istanbul as a candidate for the 2020 Olympics with the slogan “Bridge Together”. Both the new airport and the proposed canal are expected to cause extensive environmental damage. Yet no attempt has been made to consult the people of Istanbul. Indeed, rather than being a considered attempt to address Istanbul’s needs, the schemes look more like self-aggrandizing vanity projects for Erdoğan himself.

On May 29, 2013, the groundbreaking ceremony was held for the third Bosphorus bridge. Extraordinarily, Erdoğan opted not to “bridge together” but to divide his own country by naming the new bridge after Yavuz Selim Sultan (1470-1520), the Ottoman sultan who is notorious for massacring tens of thousands of members of Turkey’s heterodox Alevi religious minority. The announcement came at a time when Alevis were already alarmed by Erdoğan’s accusations that they are supporting Syrian President Bashar al-Assad and a month before the twentieth anniversary of the massacre of 35 Alevis by a Sunni mob in the Anatolian city of Sivas on July 2, 1993.

In comparison to some of Erdoğan’s other projects, the scheme that proved to be the tipping point is relatively small in size. Erdoğan has long wanted to make his mark on Istanbul by redeveloping Taksim Square, the symbolic heart of the city. His plans include the destruction of the adjacent Gezi Park and the construction of an Ottoman barracks, which would house a shopping mall. There has been no public consultation and the project lacks the necessary legal permits. Nevertheless, work on the approach roads started in late 2012 and has severely disrupted the flow of traffic through the square, inconveniencing AKP voters and non-AKP voters alike.

On May 28, 2013, a few dozen environmentalists began a peaceful protest in Gezi Park to prevent workers uprooting its trees. Each time that they were driven out by baton-wielding riot police, they waited and then returned, their ranks swelled by more supporters and sympathizers. On May 31, 2013, after the riot police conducted a particularly brutal dawn assault, the number of protestors suddenly began to rise exponentially. By evening, tens of thousands were in Taksim Square, where riot police tried to disperse them by firing tear gas and pressurized water cannons. Dozens were injured but the number of protestors continued to grow. On the afternoon of June 1, 2013, Erdoğan was forced to admit defeat and withdraw the riot police, leaving the Taksim Square and Gezi Park to the exultant protestors.

Over the days that followed, Erdoğan tried to downplay the significance of the protests, claiming that they had been organized by the opposition Republican People’s Party (CHP), foreign intelligence services and “marginal extremist groups”. In reality, the protests have been spontaneous and leaderless, driven by Twitter hashtags and Facebook pages rather than any organization. It is true that some militant leftist groups have tried to bandwagon the protests and it is their militants who have been involved in many of the most violent clashes with the police. But they did not initiate the protests and are not leading them. The militants account for only a tiny proportion of the number of people on the streets. The vast majority of the protestors have never engaged in any political activity before. Many are very young, the now politicized members of the previously largely apolitical youth of Turkey’s secular middle classes. Far from being organized by the CHP, it is their lack of trust in the opposition parties to safeguard the freedoms that they believe are being eroded by Erdoğan’s didactic conservatism that has pushed them to take action themselves.

The initial Gezi Park protest has sparked hundreds of large and small demonstrations across the Turkey, only a small proportion of which – usually those where there have been clashes with the police – have attracted media attention. Most of the demonstrators appear to be secularists. But their fury is being directed primarily not against the AKP or even Erdoğan’s Sunni Islamic agenda but his arrogance and authoritarianism.

Dangerously for Erdoğan, there was already unease in the AKP at his increasingly autocratic nature. This been exacerbated by Erdoğan’s refusal to find a face-saving compromise over what is only a shopping mall with seemingly little more than Erdoğan’s pride at stake. On May 31, 2013, as the protests escalated, a court in Istanbul temporarily halted the redevelopment of Taksim pending the completion of expert reports on its impact. On June 2, 2013, Erdoğan went on national television to declare that he would build what he wanted in Taksim, including a mosque. On June 3, 2013, he implicitly threatened to bring AKP supporters onto the streets to fight the protestors. Although none has publicly criticized him, since these outbursts neither have any of the leading members of the AKP issued public expressions of support for Erdoğan. 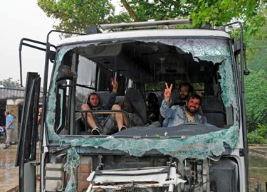 CONCLUSIONS: The protests have already stripped away many of the artifices with which Erdoğan has dressed his claim to have introduced an advanced democracy to Turkey. He has repeatedly dismissed criticism that he has intimidated the media into silence. But, on 1 June 2013, as the protests in Taksim raged and were carried live on international news channels, Turkish stations faithfully broadcast cooking programs and health phone-ins for fear of incurring Erdoğan’s wrath. For the international observers in particular, any illusions they may once have held about Erdoğan’s democratic credentials are now gone forever.

The impact on Erdoğan’s grip on political power is more uncertain. The longer the protests have continued, the more irascible and irrational he has become. Extraordinarily, on June 3, 2013, he even left for a pre-planned four-day visit to North Africa, confidently asserting that the protests were already declining and would have disappeared by the time he returned. This was mistaken to the point of self-delusion. Erdoğan still has time to pull back and limit the damage. His dreams of a decade of one-man rule have already gone. But the longer Erdoğan persists in denying the significance of what is happening the higher the price he is likely to pay. Ultimately, it is even possible that President Abdullah Gül will try to circumvent Erdoğan and intervene himself to try resolve the crisis.

Even if it is only coming from a specific section of society, the protests that are sweeping the country are arguably Turkey’s first ever spontaneous, grassroots political movement. As a result, it is almost impossible to predict what happens next. If the protests are destined to fade away, there is currently no sign of it. On the contrary, they appear to be still gaining momentum – the participants feeling empowered, determined but also bewildered by all that is happening. They have never been here before. And neither has Turkey.