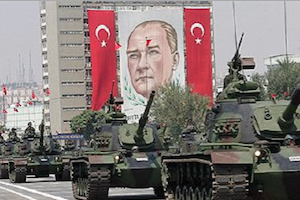 BACKGROUND: The Turkish Armed Forces are on the road to rehabilitation following a decade of marginalization in Turkish politics and society. The dismissal of the so called Sledgehammer case, the breakup of the alliance between the ruling Justice and Development Party (AKP) and the Gülenist fraternity, and the deteriorating security situation in the Kurdish southeast of Turkey have all been deciding factors in this process. With a broadening role for the military in internal security and an improved relationship between AKP leaders and the generals, will the Turkish armed forces once again become an active player in politics?

On four occasions in the past (1960, 1971, 1980 and 1997), the military has intervened to “correct” the political course of the country, and until the AKP came to power in 2002, the military was in a position to wield direct influence on the decision-making of elected governments.

After 2002, a series of institutional reforms removed the military from positions of power in the state establishment. The emergence of a conservative-religious elite in government, bureaucracy and business also deprived the military of many of its former civilian allies in these sectors, limiting the generals’ opportunities to influence politics by more indirect means. In addition, the large-scale legal processes implicating scores of military officers in alleged plots to overthrow the government, known under names such as Ergenekon and Balyoz (Sledgehammer), served to discredit the military institution in the eyes of many Turks. In 2012, which marks a low point for the Turkish military as far as national prestige is concerned, over half of its admirals and one in ten generals were behind bars.

However, not before long the tide started to turn for the military. In December 2013, the Turkish General Staff filed a complaint with the judiciary demanding a retrial of the defendants in the Balyoz case. The military made this move following a statement from Yalçın Akdoğan, then chief political adviser to the then Prime Minister Recep Tayyip Erdoğan, that several military officers had been convicted on false charges. In June 2014, all the defendants in the Balyoz case were released pending a retrial, and in March 2015, the Turkish court system dismissed the whole case because the presented evidence was deemed “fabricated.” For the Turkish military, the dismissal of the Balyoz case represented a clear vindication after years of ordeals and public humiliation at the hands of state prosecutors.

Subsequently, a closer relationship between the military and the AKP government has developed. The deteriorating security environment in the country’s southeastern provinces has increased the importance of the armed forces in national security. The armed conflict with the Kurdistan Workers’ Party (PKK) has restarted, and tensions with Russia have escalated. These developments have brought the military back as a central player in upholding both external and internal security.

The showdown between the AKP government and its erstwhile political allies in the Gülen movement – dating back the corruption cases of December 2013 – has also contributed to creating a community of interest between the government and the military. Both the AKP leadership and the generals wish to curb the influence of Gülen supporters in the state apparatus and within military ranks.

IMPLICATIONS: Yet the community of interest between the military and the government extends further than fighting common adversaries. The nationalistic turn of the AKP as well as President Erdoğan’s vision for a “new Turkey” equipped with a modern and strong army are both in harmony with the political and professional interests of the Turkish armed forces. The AKP government’s investment in the defense industry is welcomed by the generals who are eager to modernize the country’s armed forces.

It has been correctly noted that the changes in civilian-military relations that took place starting in 2002, when AKP came to power, were more about a de-militarization of politics than a civilianization of civilian-military ties. Institutional reforms have reduced the political influence of the armed forces significantly, and a forceful elected government has put some limitations on the autonomy of the military – most importantly in decisions on high-level promotions. However, the military has nonetheless retained substantial influence on political decision-making in the areas of security and defense, and it remains a relatively autonomous institution within the state apparatus when it comes to personnel management, force deployment and allocation of budgetary resources. In other words, the military has not been fully subjected to civilian control and oversight. This state of affairs has implications for how civilian-military relations are going to evolve.

The Turkish military does not harbor any known intentions to regain its former positions of power in the political decision-making process, or even less to carry out another intervention in order to unseat the elected government. On the contrary, both the previous and the current Chief of the General Staff have cooperated with the AKP government and they have a made a point of keeping the armed forces out of politics. The military leadership has continued to adhere to non-interventionist line of thinking that was inaugurated by the then Chief of the General Staff General Hilmi Özkök in the early 2000s.  Metin Heper, a prominent Turkish political scientist, argues that from 2002 onward, the military leadership decided to put democracy first and to respect and trust the judgment of the people as expressed through democratic elections. The military would still make its views known on certain national security matters, but not act as national political overseers and intervene directly in the government decision-making process.

Arguably, the military has little motivation to become more involved in politics now. The military is still healing its wounds from the Ergenekon and Balyoz processes. Reportedly there is also huge resentment within the officers’ corps against the top brass for their perceived inaction during the legal processes. There are analysts of the military who claim that a new intervention in politics would find little internal support – especially among the new generation of officers who have embraced democracy and oppose the idea of military intervention as an accepted way to replace civilian governments.

What is clear is that given the new community of interests between the military and the government, the military leadership has no compelling reason to take any political action. But it is also clear that Turkish society has evolved in its view of the military’s role. Surveys on public opinion of the armed forces indicate that even if the military is still the most trusted institution in Turkey, a majority opposes military interventions in politics.

That being said, the military still claims certain political interests of its own. In the past, the armed forces saw the defense of secularism and territorial integrity (i.e. Turkey as a unitary state) as part of their internal security responsibilities. After over a decade of AKP rule, the military appears to have come to terms with a moderate form of political Islam. The unitary state principle, however, remains a red line for the military, as the then Chief of the General Staff General Necdet Özel made clear in a statement on August 30, 2014. General Özel told Turkish media that the General Staff had not been informed of the ongoing negotiations between the government and the PKK. In this context, Özel found it necessary to underline that: “the Turkish Armed Forces has certain red lines regarding these negotiations and will do what is necessary if these lines are not respected.” The statement showed that the military leadership is prepared to enter the political debate and voice its opinion when is core interests appear to be under threat.

The military has also retained considerable political influence in the security field, both through its strong presence in the National Security Council, the body where Turkey’s security policy is de facto made, and by means of its expertise in defense and military matters.

The institutional autonomy of the armed forces gives the military leadership a certain capacity to act independently of the elected government, and therefore potential leverage vis-à-vis civilian leaders. For example, Article 85 of the Armed Forces Internal Service Code gives the Turkish armed forces authority to order full battle preparedness on its own – without a prior political decision.

In a country that has experienced four military interventions over the last sixty years, such authority has obvious political implications. As a retired army general who asked not to be named told this author, ordering all forces to battle preparedness would be a logical step in preparation for a coup.

CONCLUSIONS: The Turkish military has no known intention to intervene in the political decision-making process. However, the military has retained a capacity to do so – both by means of its continued role in security policy making and its relative institutional autonomy.

The military remains dedicated to the notion of the unitary state. The military can be expected to become politically more assertive should it perceive that it’s ‘red-lines’ regarding the unitary state principle are being crossed. The extent of any military involvement in politics will therefore largely depend on how the conflict with the PKK develops, and how the Kurdish issue as a whole is handled by the government. However, it is highly unlikely that any such involvement will take the form of a direct intervention; it is more probable that the generals would seek to force the hand of the government, or pressure it not to make concessions to the Kurds, in case such a move were to be contemplated.

Unless the professional interests of the military come under threat, for example in the form of political purges in the officers’ corps similar to those that have already taken place in the police and the judiciary, the military leadership will most likely stick to its non-interventionist line in politics. So far, there have been no real attempts by the government to interfere in the internal affairs of the military. Should there be such an attempt, it will constitute the first real test of how much civil-military relations in Turkey have changed, and how much civilian control and oversight the military leadership is actually willing to accept.

Lars Haugom is a researcher with more than fifteen years of experience in teaching, analysis and directing analytical work on the Middle East for the Norwegian Armed Forces. He is currently guest researcher at the Norwegian Institute for Defense Studies where he works on a Ph.D. project about civil-military relations in Turkey.

More in this category: « The Sound of Footsteps: Erdogan’s New Enemies Within Is Erdoğan Turkey’s Only Problem? »
back to top