BACKGROUND: Turkey’s ruling Justice and Development Party (AKP) represented a break with the Islamic political movement from which it sprang; the founders of the party had come to the conclusion that they needed to abandon the anti-Western stance that had long been a defining feature of Turkish Islamism. The reformist generation of Recep Tayyip Erdoğan and Abdullah Gül parted ways with Necmettin Erbakan who had led the Islamic movement since the late 1960s; they promised to transcend old, ideological obsessions and in the process they succeeded in rallying liberals, secular conservatives as well as social democrats to the new, reformist party. Yet after more than a decade in power, old, Islamist reflexes are pulling the ruling AKP back to its origins. That, at least, is the impression created by the increasingly strident rhetoric of Prime Minister Erdoğan.

The protests that erupted in Istanbul and across Turkey in June, when riot police violently dispersed environmental activists, and the subsequent overthrow of Egypt’s Islamist president Mohammed Morsi, an ideological ally of Erdoğan, seems to have convinced the Turkish prime minister that there is a Western-inspired conspiracy at work against his party and its ideological affiliates in the Middle East. Speaking at a press conference in Ankara on August 15, Erdoğan accused Israel of being behind the coup in Egypt, and he held the Western countries to account for what has happened: "One day, now or later, a Moses will emerge to demand an account of the cruelty. ... Now, they have declared emergency rule in Egypt. I don’t think that will solve anything. Why not? Because I believe these people who believe in martyrdom will one day gain their democratic rights in Egypt. If the West wants to test democracy, they have to understand this. ... If the Western countries do not act honestly on this issue, I believe one day democracy will be questioned in the world."

Erdoğan also made an explicit connection between the fate that has befallen Morsi and what he seems to fear is in store for himself: “Today it is Egypt, tomorrow they may want to unsettle Turkey because they don’t want a strong Turkey in this region.”

The unnamed powers to which Erdoğan refers presumably include – alongside Israel that he explicitly singles out – the United States, as well as the leading Sunni power in the Middle East, Saudi Arabia, whose support for the Egyptian generals that ousted Morsi has caused consternation among the ranks of the AKP.

Erdoğan’s criticism is not confined to Western powers: he has notably expressed his disappointment over the support that the Grand Imam of the Al-Azhar mosque has lent to the coup in Egypt, a statement that was condemned by the Egyptian government. But the statements directed against Turkey’s Western allies betray more than disappointment. “Anyone who lends an ear to what the prime minister is now saying in his public addresses and rallies can easily arrive at the conclusion that he sees the European Union, the United States, the United Nations and European countries as Turkey's enemies,” noted Bülent Keneş in the conservative daily Today’s Zaman.

Comments such as these, which have in fact become regular in the media outlets that are close to the fraternity of the preacher Fethullah Gülen, demonstrate that Erdoğan’s confrontational stance – at home as well as abroad – against perceived enemies is very far from being universally endorsed by the broader Islamic conservative movement; in effect, Erdoğan’s reversion to his Islamist roots has an anachronistic character. As Erdoğan’s response to the wave of protests that shook Turkey in June made clear, he believes in mobilizing the most conservative part of the base of the AKP. Yet, the relapse into old fashioned Islamism, informed by hostility toward the West, is unlikely to bolster Erdoğan’s political fortunes; to assume that is to overlook the class dynamics that brought about the change of the Islamic movement in the first place, and which are even stronger today.

IMPLICATIONS: The Islamic movement in Turkey had its roots in small town Anatolia of the 1960s; it expressed the dissatisfaction of the rural bourgeoisie, made up of shopkeepers and small manufacturers, over the fact that the economic policies of the state privileged the mainly Istanbul based big business. The sheltered bourgeoisie of Istanbul was indeed the creation of the Turkish state. The secular lifestyle of this bourgeoisie, setting it apart from the religious conservatism of small town Anatolia, lent a cultural aspect to what was basically an intra-class rivalry; the West, with whose lifestyle the urban bourgeoisie identified itself was by definition the enemy of the conservative bourgeoisie.

The market reforms that were introduced in the 1980s, which opened up Turkey to global markets and competition, turned this once inward looking rural bourgeoisie into “Anatolian tigers” with dramatically widened business horizons. For religiously conservative entrepreneurs doing business all over the world, it no longer made any sense to sustain enmity against world capitalism, the United States and Europe; the AKP, with its drive for EU membership, was nothing but the political expression of this socioeconomic change.

The ideological evolution that the Islamic movement underwent during the 1990s resulted not only in the abandonment of its anti-Western posture, but also in the adoption of pro-capitalist policies; the movement of Necmettin Erbakan assailed capitalism as well as the West, promising a “just order”. The “Anatolian tigers” had no use for such rhetoric; yet the AKP was successful precisely because its ideological heritage enabled it to attract the less affluent and the less educated as well. Erdoğan’s reversion to the Islamism of Erbakan and his strident populism may resonate among poorer strata, but it holds little appeal for a prospering class of conservatives.

There is no reason to assume that the dynamics that once propelled the rising middle class of Anatolia to seek a political translation of their desire to be fully integrated in the global economy look any different today than what they did at the time of the founding of the AKP. A decade later Turkey is on the contrary an even more globalized country and the aspirations of the religiously conservative bourgeoisie that brought the AKP into being has far from abated. As the economic development of Turkey has raised levels of income and education, the class base of the kind of centrist party that the AKP used to be has in fact widened. 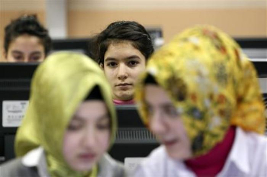 Erdoğan’s resurrection of the ideological militancy of a bygone era, when Turkey was closed to the world, is cause for deep concern, not least among conservative business circles.  Those concerns were recently expressed by Mustafa Boydak, a prominent business figure who is also the chairman of the chamber of industry of the central Anatolian city of Kayseri, the hometown of President Abdullah Gül. Boydak, who personifies the “Anatolian tiger”, called on the government to conduct a foreign policy that seeks “peaceful relationships, especially with its neighbors regardless of their religion, faith or sect”, an unveiled criticism of the AKP’s interventionist policies in not least Syria. Referring to Boydak’s remarks, İhsan Dağı wrote in Today’s Zaman that “now that the AK Party has damped the EU membership objective, abandoned its “good neighborhood policy” and started developing an anti-globalization stand justified by conspiracy theories, the conservative businessmen of Anatolia have become worried about the direction of Turkey's foreign policy. It is difficult to do business with a world that is depicted by the government as conspiring against Turkey.”

The Anatolian business community is concerned not only by the AKP’s antagonistic foreign policy, but equally by its internal policies. The speech of the chairman of the Kayseri chamber of industry included a call to the government to stop the harassment of business groups that politically displease it. Boydak called on the government not to discriminate against businesses on political grounds, repeating the practice of the state at the end of the 1990s when it sought to cripple businesses owned by religious conservatives. Boydak warned about inflicting harm on companies on which the prosperity of Turkey depends. His remarks came as a reaction to the raid on July 24 by police and finance ministry tax inspectors of the offices of the Tüpraş refinery and the energy company Aygaz, both owned by the Koç Holding, Turkey’s number one industrial group.

The Koç group has become a target of Erdoğan after the Gezi protests in June; the prime minister was incensed that Divan Hotel, which is owned by the Koç Holding, opened its doors for the victims, among whom several children, of the police attack on the Gezi park on June 16, accusing it of sheltering “terrorists”.  By expressing criticism, Mustafa Boydak took the risk of inviting a similar punishment by the state; indeed, Boydak was strongly rebuked by the government. But in the longer run, it is arguably Erdoğan’s AKP that is taking the bigger risk by pursuing policies that run counter to dominant societal dynamics.

CONCLUSIONS: Differences of culture and life style still separate the two middle classes of Turkey, the religiously conservative Anatolian bourgeoisie and the secular bourgeoisie. Yet, Turkey’s political future will likely be shaped by the synergy, indeed alliance, of the two branches of the bourgeoisie. The election recently of an “Anatolian tiger”, Memduh Boydak, the CEO of Boydak Holding, to deputy chairman of Tüsiad, the Association of Turkish Industrialists, the leading organization of the secular bourgeoisie, is suggestive in this respect.  In material terms, there is no reason for the two branches of the bourgeoisie to sustain a state of confrontation.

It is reasonable to expect that the class dynamics that brought the centrist AKP into being will once again produce a political moderation that is in accordance with the material interests of the combined bourgeoisie.

More in this category: « Turkey's Dynamic Railway Expansion Has Larger Regional Implications Unrest is Breeding among The Alevis »
back to top