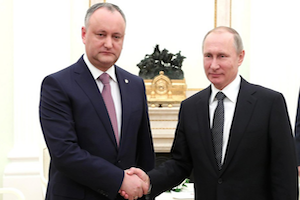 BACKGROUND: On October 17, Turkish President Recep Tayyip Erdoğan touched down in Chisinau for a two-day visit, which Moldovan President Igor Dodon described as “historical” in scope for the small post-Soviet nation. The Turkish leader had arrived in Moldova’s capital to unveil the newly renovated Presidential Palace, which rioters destroyed in April 2009. Ankara, which had committed to fully funding the renovation in December 2017, provided 10 million euros toward the costs.

The reconstruction, and indeed Erdoğan’s visit, were not without controversy. One month prior to the “historic visit,” Turkey’s intelligence service (MİT), together with Moldova’s secret service (SIS), abducted six Turkish teachers in the capital. Turkey’s pro-government media lauded the renditions of the followers of Fethullah Gülen as a significant “blow to FETÖ’s Balkan branch.” Erdoğan — like the vast majority of the Turkish public — blames the abortive coup of July 2016 on his former ally Gülen, who currently resides in the U.S., and has designated his network as the Fethullahist Terrorist Organization (FETÖ) since the two fell out in late 2013.

Yet, the president’s Moldova trip was not strictly transactional. Erdoğan spent his second day in Gagauzia, an autonomous region of Orthodox Christian Turks within Moldova, which Ankara has held close ties with since the fall of the Soviet Union. Turkey’s influence is secondary to another power, though. Moscow has an interest in the territory and sees the region’s pro-Russian Turkic minority as an important source of leverage in its dealings with Chisinau. Indeed, Gagauzia, long the most impoverished part of the poorest country in Europe, is now emerging as an important “bridge” between Russia and Turkey’s ambitions in the Balkans and Black Sea region.

The Gagauz, with a population of 150,000 in Moldova, speak a language that is mutually intelligible with standard Turkish and other Balkan Turkish dialects. In Moldova’s highly tense and politicized linguistic atmosphere, the Gagauz use Russian (either as a first or second language), as opposed to Moldovan (Romanian) in communicating with their compatriots. Cultural and soft-power ties with Russia run deep, especially given the high level of penetration by Russian state-media.

The exact origins of the Gagauz are disputed; one historian tallied 19 separate theories of ethnogenesis. Among the most popular are that the Gagauz are, “christianized Turks, turkicized Bulgarians, turkicized Greeks, or descendants of Turkic Bulgars.” Another theory is that the Gagauz are the remnants of an Orthodox state led by the Seljuk Sultan, Izz al-Din Kaykaus (whose name is a possible source for the ethnonym Gagauz).

Gagauzia, unlike Transnistria, avoided war following the breakup of the Soviet Union (although there were minor skirmishes between armed groups). Yet, the region continues to see political tension, and in many respects, like Transnistria, the territory functions as a Russian spoiler for Moldova’s EU and NATO ambitions. In February 2014, Gagauzia held an unrecognized referendum on further Moldovan integration with the EU. With 70 percent voter turnout, 97 percent were against EU accession, and 99 percent were in favor of Gagauz independence if Moldova were to “lose its sovereignty.”

While a court ruled the referendum unconstitutional — Gagauzia does not have legislative right to conduct foreign policy — the pro-Russian Gagauz elite, as well as Moscow, could still use the vote as political leverage in Chisinau’s future negotiations with the EU.

IMPLICATIONS: Corruption in Moldova is endemic. The de-facto independent Transnistria (known as PMR for its Russia acronym) has an infamous reputation as Europe’s “black hole,” a sanctuary for smugglers and a rogue weapons manufacturer. The country’s position between NATO-member Romania and war-torn Ukraine lends it strategic importance, not least because Russia has “peace-keepers” in PMR on Ukraine’s western flank.

Yet, it may be Moldova’s status as a haven for money laundering that makes the country most vital to Moscow. The “Russian Laundromat” scandal showed the scale of corruption: $20 billion of Russian funds passed through Moldova’s banks to be “cleaned” in the EU. In July 2015, leaked documents revealed that $1 billion, or 12 percent of the country’s GDP, had disappeared from three banks, leading to widespread anticorruption protests in the capital.

Erdoğan’s interest in Moldova is both personal and political. The Moldovan authorities’ complicity with the rendition of the Gülenist suspects helps sustain the sentiment that Turkey is “under attack” both at home and abroad. Moreover, the president’s policies have led to increased international isolation, and Erdoğan and his ruling Justice and Development Party (AKP) need to show domestic audiences that Turkey still has allies. The spectacle of cheering Gagauz, waving Turkish flags in a European country, serves this narrative.

Turkey’s strategy in Moldova, like Russia’s, is low-cost. The renovation of the Presidential Palace, which critics have tied to the six teachers’ rendition, had a price tag of $10 million. As a European backwater, where rule of law is weak, the Turkish government feels it can act with impunity. Commenting on the abductions, Erdoğan flippantly stated that it is “normal for friends to help each other when there are problems.” As a parting gift, the Turkish president gave the Moldovan government two water cannon trucks for fighting street protests. When questioned by journalists, Moldova’s prime minister responded, “don’t look a gift horse in the mouth.”

Turco-Russian relations continue to improve on multiple fronts, albeit on a transactional basis, and now Erdoğan may be in a position to provide a favor to Russian President Vladimir Putin and his partner, Moscow Patriarch Kirill. The Russian Orthodox Church, led by Patriarch Kirill, recently split from the Ecumenical Patriarch Bartholomew I of Constantinople, in retaliation for the latter’s granting of autocephaly, or independence, to the Ukrainian Orthodox Church. There are already rumors that Moscow is looking to establish either Russian church dioceses in Turkey, or recognize the Turkish Orthodox Church as a rival “heir of the Constantinople Patriarchate [from] the time of the Byzantium Empire.” To effectively challenge the Ecumenical Patriarch, the Turkish Orthodox Church would need Turkish and Orthodox worshipers, which are difficult, if not impossible to find. Russia could change the equation here since the Gagauz church, the only viable source of Orthodox Turks in the world, falls under the jurisdiction of the Russian Orthodox Church and its patriarch Kirill.

The miniscule Turkish Orthodox Church that exists in Turkey, and in its curious history, provide precedents for outreach to the Gagauz. The Turkish Orthodox Church was founded by Papa Eftim, a member of the Karamanli (Turkish speaking Greek Orthodox), a community that fought on the side of Mustafa Kemal [Ataturk] during the Greco-Turkish war of 1919-1922. As a reward for his service, Mustafa Kemal granted Papa Eftim and his family an exemption from the 1923 compulsory population exchange between the two nations. Following the war, Papa Eftim worked in coordination with the government to undermine the Ecumenical Patriarchate and its few remaining followers in the new Turkish Republic. Papa Eftim’s church never had more than a few hundred members. In an effort to bolster the church’s numbers, in 1935 Turkey’s ambassador in Romania convinced 70 Gagauz to relocate to Turkey. Yet, the Turkish Orthodox Church’s movement was ultimately unsuccessful, as many Gagauz converted to Islam after experiencing the reality of life as a Turkish religious minority at that time.

Currently, the most visible member of the Turkish Orthodox Church is Papa Eftim’s granddaughter and avowed Turkish nationalist, Sevgi Erenerol. As part of the Ergenekon show trials, which Erdoğan and his decade-long ally Gülen exploited to crack down on their political adversaries, a Turkish court sentenced Erenerol to life imprisonment, but she was released after five years. Following Erdoğan’s fallout with Gulen, and rapprochement with Turkish nationalists, Erenerol’s prospects have changed. Now, in light of the schism, Russian state-media has reported that the Turkish Orthodox Church, and its spokeswoman Erenerol, are suing Bartholomew I and the Ecumenical Patriarchate for inciting religious and ethnic conflict. Moreover, a letter purportedly written by Gagauz in Turkey to the Moscow Patriarch has been published. In the letter the Gagauz declare they have no desire to worship at the Ecumenical Patriarchate’s sites and asked for Kirill to “continue to feed his flock.”

Patriarch Kirill was supposed to visit Gagauzia following Erdoğan on October 27, but later postponed. While still theoretical, the Moscow Patriarch and the Russian government may seek to undermine Bartholomew I through Erenerol’s Turkish Orthodox Church. Any attempt to create a rival religious authority in Istanbul, however, would require Erdoğan’s approval. Turkish law states that only a Turkish citizen can hold the title Archbishop of Constantinople. If approved, the Russians and Turks could use their combined political and economic leverage to persuade the Gagauz to join the new church.

CONCLUSIONS: Parliamentary elections will be held in Moldova in February 2019. Pro-European Union parties see the vote as crucial for continued momentum following an Association Agreement in 2016. Recent mayoral elections in Chisinau, however, may be a bad omen for transparency and court interference. Russia has stated zero tolerance for more “color revolutions,” as their actions in Ukraine have shown. For Erdoğan, keeping the status quo in Moldova, i.e., weak institutions and rule of law, is more favorable than EU accession. A poor and corrupt Moldova will allow Russia and Turkey to continue to play power politics not only in the EU’s backyard but also with the minorities at home. Such machinations may doom the tiny Gagauz to be pawns in Putin and Erdoğan’s greater regional ambitions for territorial and spiritual domination.

Aykan Erdemir is a former member of the Turkish parliament and a senior fellow at the Foundation for Defense of Democracies.

John Lechner is a former financial analyst who is currently an intern at the Turkey program of the Foundation for Defense of Democracies. He holds a BA in Slavic Languages & Literature from Harvard University.

More in this category: « How the Fed Empowered Erdogan, and How It Now Undermines his Rule New Tone, Old Substance: Erdoğans European Gambit »
back to top