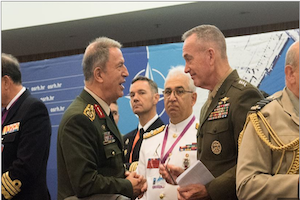 BACKGROUND: On May 3, 2019, Turkey formally announced via NAVTEX, the international maritime navigational telex system, that Turkish ships would drill for natural gas off the southern coast of the Republic of Cyprus (ROC), prompting warnings from Cyprus' regional partners Egypt and Greece as well as the European Union (EU).  The EU High Representative for Foreign Affairs and Security Policy, Federica Mogherini, issued a stern warning to Turkey, declaring that "we urgently call on Turkey to show restraint, respect the sovereign rights of Cyprus in its exclusive economic zone and refrain from any such illegal action to which the European Union will respond appropriately and in full solidarity with Cyprus."

Ankara claims to be defending the legal rights of Turkish Cypriots in the northern half of the ethnically divided island who are the constitutional co-owners of the island's natural gas but precluded from participating in its development. Northern Cyprus is governed by the Turkish Republic of North Cyprus (TRNC) – a political entity recognized only by Turkey. The TRNC sold licenses to Turkish Petroleum to explore in offshore blocks that overlap some the ROC's licensing blocks.  Turkey's declared continental shelf likewise overlaps with licensing blocks that the ROC claims are located in its exclusive economic zone.

The response issued by Turkey's Ministry of Foreign Affairs put the blame squarely on the ROC, declaring the South Cyprus government is "irresponsibly jeopardizing the security and stability of the Eastern Mediterranean region, by disregarding the inalienable rights of the Turkish Cypriots, who are the co-owners of the Cyprus Island … refusing every proposal of cooperation and insisting on unilateral activities despite all our warnings."

Previously, in February 2018, Ankara attempted to send a message to Egypt, the ROC, and the EU through a limited naval action. Cairo and Nicosia had been negotiating to market Eastern Mediterranean gas to Europe using Egypt’s Liquified Natural Gas (LNG) plants to ensure that the region’s offshore gas bypasses Turkey’s pipeline route to the EU markets. On February 8, 2018, Italian energy giant ENI, which had discovered Egypt's massive Zohr natural gas field adjacent to Cypriot territorial waters in 2015, announced a significant gas find in Cyprus’s nearby Calypso field.  On February 23, the Turkish navy blockaded ENI's drill ship before it could reach its intended drilling site in Cypriot waters in the same licensing block, forcing the company to withdraw the vessel.

Contrary to Ankara’s desired outcome, Turkey’s action pushed Nicosia even closer to Cairo with the ROC eventually agreeing to supply Cypriot gas to Egypt’s LNG plants for export. Israel, which once had been considering an Israel-Turkey undersea gas pipeline, followed the ROC's lead and inked a deal to sell its gas to Egypt for LNG export.

The next major turning point occurred with ExxonMobil’s exploration of Cyprus’s block 10, which shares the same reservoir rock bed as Zohr. On November 12, 2018, ExxonMobil's drillship arrived unmolested by Turkey at the drill site, as Ankara chose not to antagonize Washington by interfering with the U.S.-based energy giant.  On February 28, 2019, approximately one year after Turkey's action against the ENI drill ship, ExxonMobil announced that it had made a gas discovery of in the Glaucus-1 well located in block 10. With 142-227 billion cubic meters (bcm) of in-place reserves, the Glaucus-1 discovery is the third noteworthy find in Cyprus. Combined with the approximately 320 bcm from its Calypso and Aphrodite fields, the ROC now holds a more significant position in its energy partnerships with Egypt and Israel, and accordingly greater geopolitical importance for the EU and the United States.  A little more than month after ExxonMobil's Glaucus-1 find, Turkey issued the May 3rd NAVTEX that it would begin drilling operations in south Cypriot waters.

IMPLICATIONS: Turkey's actions put the ROC at a decisive disadvantage as the ROC's navy lacks capital warships and therefore cannot muster a credible deterrence. Despite continued harsh EU condemnations, Turkey doubled-down on its controversial action by announcing on May 12, 2019, that it would send a second drill ship, Yavuz, into Cypriot waters. The ship was launched on June 20, 2019 and is expected to reach its intended drillsite in mid-July, commencing drilling operations in waters off the southern coast of the Karpas peninsula that forms the eastern tip of Cyprus.  Both drillships are accompanied by protective naval escorts. The first drillship, Fatih, which operates 75 kilometers (42 nautical miles) off the western side of the island, is accompanied by two Turkish naval frigates and three gunboats.  Yavuz will be escorted by one naval frigate.  The presence of Turkish surface combatants in Cypriot waters alters the security framework of the maritime domain.

Lacking sufficient naval capacity of its own, the ROC has been attempting to develop a level of effective deterrence by drawing Western naval powers to its side – such as the United States, France and Italy.  The ROC’s efforts have been hampered by the fact that it is not a member of NATO while Turkey is a NATO ally of the aforementioned nations.  Securing political declarations from the EU and key EU member states along with legal actions such as the issuing of international arrest warrants for the crew members of the drillships and companies cooperating with Turkish Petroleum, are ultimately aimed at creating a diplomatic context for these NATO members to deepen their respective military commitments to the Republic of Cyprus.

Greece plays an important mediating role in this process. Although a NATO member, Greece is committed to the ROC's defense in case of an attack by Turkey, as formalized in the 1993 Greece-ROC joint proclamation of Single Area Defense Doctrine. The Hellenic army also maintains its ELDYK regiment on the island that operates in support the Cypriot National Guard. Still, the ELDYK presence pales in comparison to the upward of 40,000 military personnel that Turkey maintains in the TRNC.  Greece, in partnership with the ROC, has entered into two significant trilateral military relationships that serve ROC interests: The Greece-ROC-Egypt trilateral relationship and the Greece-ROC-Israel trilateral relationship.  It is Greece’s participation that makes these trilateral relationships meaningful as Greece conducts significant joint military exercises with Egypt and Israel.  For example, the annual Iniohos joint air force exercises hosted by Greece that took place in April 2019 included the United States, Italy, Cyprus, Israel, and the United Arab Emirates (UAE).  The inclusion of pilots from Turkey's strategic rival, the UAE, in an ostensibly Eastern Mediterranean exercise furthers the impression that NATO is acting to contain Turkish power in the region.

Washington's firm support for the Greek/ROC-led macro-alignment against Turkey has unsettled Ankara.  The U.S. already maintains a base in Crete, less than 500 miles from Cyprus.  On December 13, 2018, the U.S. greatly enhanced its security partnership with the inauguration of a U.S-Greece Strategic Dialogue.  In April 2019, the Eastern Mediterranean Security and Energy Partnership Act was introduced in the U.S. Senate by Senators Bob Menendez (D-N.J.), ranking member of the Senate Foreign Relations Committee, and Marco Rubio (R-Fla.).  In addition to promoting energy cooperation between Greece, the ROC, and Israel, the bipartisan legislation provides for $3 million of military financing assistance for Greece and $2 million to Greece and the ROC each for military training assistance.  Most significantly, the legislation would remove the arms embargo against the ROC.

France, home to energy major Total, which is conducting natural gas operations off the coast of Cyprus in partnership with ENI, similarly supports the Republic of Cyprus. In January 2019, the French frigate FS Aconit conducted three days of interoperability exercises with ROC naval vessels. Four days after Turkey’s May 12 announcement that it would send a second drillship to Cypriot waters, France signed an agreement with the ROC to service its warships at Cyprus’s Mari naval base where a new docking area is being constructed to accommodate the French navy’s larger warships.

CONCLUSIONS: Turkey’s actions in the waters around Cyprus need to be understood as reactions to Ankara’s perception of a hardening containment policy on part of the U.S. and several other of its NATO allies with economic interests in Eastern Mediterranean natural gas.  Turkey’s original announcement that is was sending the Fatih into Cypriot waters occurred just a few weeks after the introduction of the Eastern Mediterranean Security and Energy Partnership Act in the U.S. senate.

Similarly, France’s involvement in the Eastern Mediterranean has taken Ankara aback.  With increasing speculation about new French naval activity around the shores of Cyprus, French President Emmanuel Macron threatened Turkey, on June 14, with EU sanctions if it did not stop its drilling activities. The nature of Turkey’s consternation was reflected in Turkish President Recep Tayyip Erdoğan's response. Speaking to the press, Erdoğan rhetorically declared, "When did France have the right to speak on the Eastern Mediterranean? Do they have a coast in the Eastern Mediterranean? We are one of the guarantor countries in Cyprus. Greece and the United Kingdom are also the guarantor countries. What is France doing there?”

Until Ankara perceives the U.S. and other NATO members as acting like ‘normal’ NATO allies with respect to Turkey’s regional interests, Turkey will not act like a ‘normal’ NATO ally in the Eastern Mediterranean. To the extent that Ankara perceives its NATO allies to be intensifying their efforts at containment, Turkey will increase its resistance to that containment, laying stakes to protect its interests, as with the two drillships. In turn, these actions will provoke a further hardening of the containment, creating a dangerous cycle of escalation that could permanently alter Turkey's relationship with NATO.

Dr. Micha’el Tanchum is a senior associate fellow at the Austrian Institute for European and Security Studies (AIES), a fellow at the Truman Research Institute for the Advancement of Peace, the Hebrew University, Israel, and non-resident fellow at the Centre for Strategic Studies at Başkent University in Ankara, Turkey (Başkent-SAM).  @michaeltanchum

More in this category: « Are Happy Days Here Again in Turkey? Turkey's Purchase and the Path to a Post-American Alliance Architecture »
back to top