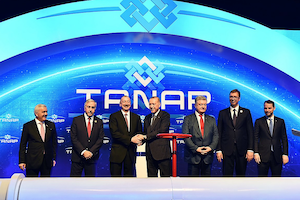 BACKGROUND: Turkey has long wanted to use its advantageous geographical location at the intersection of Europe and Asia and in close proximity to old and emerging gas producing countries in the Caspian Basin and the Middle East to turn itself into natural gas transit country to Europe, indeed to a natural gas trading hub. Turkey is also a net gas importer with demand which stands at a solid 44 billion cubic meters (bcm) annually. In this light, both TurkStream and TANAP are expected to ensure Turkey's energy security and, upon eventual expansion, advance its gas transit goals.

TurkStream will carry Russian gas through a subsea pipeline to Turkey and on to southeastern European markets, by-passing Ukraine. Ankara has planned to use the pipeline to ensure its security of gas supply and possibly replace Ukraine's role as a gas transit state to Europe. Yet for the very same reason TurkStream has been harshly criticized by the United States and the European Commission, because it could result in depriving Ukraine of gas transit fees and gas supplies.

Even though Gazprom recently agreed to continue with gas transit through Ukraine until 2024, TurkStream still goes against the European Union's intention to diversify its gas supplies away from Russia. Despite objections from the U.S. and the EU, on January 5, 2020, Russia started deliveries through TurkStream not only to Turkey but also Bulgaria, Greece and North Macedonia. The pipeline consists of two lines with a total capacity of 31.5 bcm a year. The first segment, which is envisaged to carry 15.75 bcm to Turkey, is already operational. The remaining supply will be shipped through the second line which is projected to run through Turkish territory first to Bulgaria and then to Serbia, Hungary and Slovakia.

Simultaneously, upon completion of TANAP, Turkey becomes a recipient and transit state of Azerbaijani natural gas. The Trans Anatolian pipeline is the Turkish segment of the Southern Gas Corridor (SGC), a large-scale 3,500 kilometer-long gas infrastructure project, which aims to bring natural gas from Azerbaijan's offshore Shah Deniz natural gas field to Southern Europe. SGC is comprised of three linked pipelines which will carry the supply through the South Caucasus (South Caucasus Pipeline Expansion) to Turkey and Europe. From Turkey the supply will be delivered to Greece, Albania and Italy through the Trans-Adriatic Pipeline (TAP), which is set to be completed later this year. Unlike TurkStream, TAP alongside the whole SGC project, has been endorsed by the EU as it allows Europe to diversify its import supply mix.

IMPLICATIONS: TurkStream and TANAP are predicted to advance Ankara's natural gas strategy, but not without obstacles. First and foremost, recently completed pipelines are considerably scaled down in terms of capacity and outreach in comparison to the previous, sizable gas projects such as South Stream (63 bcm a year) and Nabucco pipeline (31 bcm a year), which reduces Turkey's significance as a transit state.

The completion of TurkStream's second leg might be constrained by the European Union Gas Directive and by construction problems.  EU regulations require that half of TurkStream's second string be reserved for alternative suppliers; thus Gazprom might be able to book only 7  bcm, instead of planned 15.75 bcm. To ensure compliance with these regulations TurkStream’s second leg is built not by Gazprom but by European countries, Bulgaria and Serbia. Nonetheless, the construction of pipeline's European leg is still impeded by obstacles. While the TurkStream onshore extension on Serbian territory is almost complete, construction of the Bulgarian section is delayed, with Russian president Vladimir Putin recently threatening Sofia that Russia will reroute the pipeline to sidestep Bulgarian territory.

In contrast, it would appear that boosting the capacity of the EU-endorsed SGC would be an easier task. TANAP's starting capacity is 16 bcm, of which 6 bcm will be bought by Turkey and the remainder be delivered to South Europe via TAP. Due to the fact that now Bulgaria, Hungary, Serbia and San Marino are interested in buying SGC gas, there are plans to upgrade the capacity of TANAP and TAP to 31 bcm and 20 bcm respectively. Azerbaijan announced last year that it is ready to ramp up gas supplies to SGC by developing additional offshore fields such as Umid, Babek and Absheron. In the last few years Azerbaijan has significantly increased its natural gas output which is predicted to reach around 35 bcm per year and according to government forecasts is expected to grow by 34.8 percent by 2023. Production growth notwithstanding, Azerbaijan's gas output is still too small to significantly boost SGC capacity on its own, so both the European Commission and Baku have tried to find additional Caspian producers to provide much needed volumes.

However, unlocking additional gas reserves from Caspian producers to be sent to European markets will not be easy because of infrastructural constraints. At the moment, the most viable route to supply additional volumes of gas to the SGC is the Trans-Caspian Gas Pipeline (TCGP), which is planned to carry supply from Turkmenistan's vast gas reserves to Azerbaijan, where it would be linked to the SGC infrastructure. But despite Ashgabat's interest in the project and strong support from the U.S. and the EU, its realization remains blocked by longstanding legal issues. In 2018 Caspian littoral states – Russia, Azerbaijan, Iran, Turkmenistan and Kazakhstan – signed a breakthrough Convention on the Legal Status of the Caspian Sea, which was intended to resolve the main legal issues which restricted construction of seabed pipelines such as TCGP. However, the document still has not to come into force because Iran, unlike the other four signatories, has yet to ratify it.

New pipeline projects aside, in the past few years Turkey has been ramping up LNG imports in an effort to reduce its dependency on pipeline gas, which constitutes a major change in the country's energy supply mix. LNG imports' share in Turkey's overall gas imports has been on rise and for the first time surpassed 30 percent in the first half of 2019. Ankara is keen to use abundant and low-priced LNG supplies to reduce its dependency on pipeline gas. It falls in line with Turkey's gas supply strategy which aims to diversify gas import routes in order to improve Ankara's position vis-a-vis its gas suppliers. As long-term gas contracts will expire in the 2020s, increased LNG imports will give Turkey a strong leverage in negotiations. In order to boost its liquified gas import capacity, Turkey has recently expanded its LNG infrastructure through the onshore gas import terminals Marmara and Aliağa, and two floating storage and re-gasification units (FSRU). Since LNG imports are expected to surge, Ankara plans to boost its gas storage capacity by acquiring a third FSRU.

LNG imports and possibly increased gas volumes from Azerbaijan will also allow Turkey to realize its strategy to decrease its dependency on Russian supply. TurkStream only seemingly deepens Ankara's energy dependency on Russia, because it changes the route, not the volume of Russian gas transported to Turkey. What is more, Ankara has been consequently decreasing the share of Russian gas in its energy mix in favor of LNG supplies mainly coming from the U.S., but also from Qatar, Algeria and several other suppliers. In particular, last year marked a sharp fall of Russian gas imports and a surge of American LNG deliveries. In the first half of 2019, Russian gas export to Turkey fell by 36 percent compared to the same period in 2018. In comparison, U.S. gas imports in the analogous period in 2019 grew by an impressive 363 percent. What is more, Turkey is poised to increase volumes of U.S. gas deliveries this year.

CONCLUSIONS: Recent developments have shown that Ankara has not abandoned the idea to monopolize regional gas transit routes. In December 2019, Turkey signed a controversial maritime border delineation agreement with Libya which is widely seen as an attempt to redraw the exclusive economic zones in the eastern Mediterranean to gain access to hydrocarbons located in Libya's continental shelf.

For at least the last two years, Turkey's gas demand has been decreasing. Lower gas demand together with recently upgraded gas storage capabilities would allow Turkey to resell the eventual surplus gas on the spot market. However, TurkStream and TANAP offer mixed prospects for advancing Turkey's strategy to become an energy transit state for Europe because of limitations of capacity and unclear or limited perspectives of expansion. In contrast, reducing pipeline gas in energy mix in favor of LNG offers more opportunities for Turkey to upgrade its gas transit status and to realize its longstanding goal of becoming a gas hub.

More in this category: « After Ten Days that Shook Syria: Turkey's Dependence on Russia Reaffirmed Can Turkey Cope with COVID-19? »
back to top