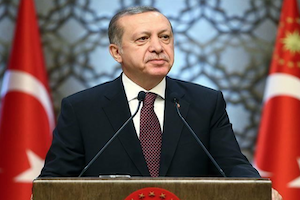 BACKGROUND:  The Turkish state has an unbroken track record of facing down societal demands and ideological aspirations that challenge the established political and economic order. Leftists and Kurds, historically the principal targets of state oppression in Turkey, have learned to fear the “despotic state.” The term – ceberrut devlet in Turkish – was originally coined by a socialist party leader in the 1960s. Others, meanwhile, who are nationalists, take pride in a centuries-old state power. The Covid-19 pandemic is putting the presumed strength of the Turkish state to its most severe test in modern history. It also underscores the need for a compassionate and social, in contrast to a despotic and right-wing, state. So far, the Turkish state has failed to live up to its reputation of strength, while it has demonstrated a lack of compassion for the plight of the broad mass of the population.

President and Justice and Development Party (AKP) leader Recep Tayyip Erdoğan drew heavy criticism from the opposition after he invited citizens to contribute to  the donation campaign of the government, pledging himself to donate seven months’ worth of salary. Former prime minister, foreign minister and AKP leader Ahmet Davutoğlu, who now leads the newly formed conservative Future Party, retorted that a “social state does not ask for help, it provides help.” Engin Altay, parliamentary group leader of the Republican People’s Party (CHP), the main opposition party, commented that Erdoğan’s call for donations “sadly shows that the state is not as strong as the citizens had assumed.”

The pandemic is also exposing the classism of the Turkish state. According to its constitution, the Republic of Turkey is a social state, which the Constitutional Court has concluded  to mean that “the state balances the interests of labor and capital and enacts economic and financial measures that protect the employees and is responsible for ensuring social justice and balance.” In practice, this has always been a dead letter. State policies have been skewed in favor of the business class, and the rule of the AKP has been no exception. Under Erdoğan, the richest 1 percent of the population has increased its share of the national wealth by 43 percent, putting it in possession of 54 percent of the country’s wealth, but the Islamic conservatives have maintained their populist image by championing the religious culture of the masses.

Trade union representatives accuse the government, which is offering businesses financial relief to cope with the effects of the pandemic, of discriminating against the working class. Arzu Çerkezoğlu, the chairperson of the Confederation of Progressive Trade Unions (DİSK), said that the handling of the pandemic reveals the “class preferences of the government.” Labor representatives are frustrated that workers are told to keep going to work while others are told to stay home, which they point out puts not only the workers but society at risk.

President Erdoğan has emphasized that the “wheels of the economy must continue to turn,” but on April 10, the Turkish government at short notice locked down 31 provinces, including Istanbul, for 48 hours, which scaled up existing curbs, under which those under 20 who don’t work and those over 65 had been told to stay home.

The trade unions demand that the government ensures that workers can stay home with their continued employment and a sufficient income guaranteed. On April 8, the Turkish government announced a three month long moratorium on dismissals that can be prolonged for another three months, but the measure fell short of meeting the demands of labor. The moratorium on dismissals gives employers the right to furlough employees without pay. Workers who are furloughed will receive 39 lira (which is less than 6 USD) per day, the equivalent of half of minimum wage, which will be paid from the workers’ unemployment fund. DİSK chairman Çerkezoğlu welcomed the moratorium on dismissals but protested that workers are being condemned to misery.

Critics also argue that privatizations in the health care sector have made Turkey more vulnerable to the pandemic. Pevrul Kavlak, the secretary general of The Confederation of Turkish Trade Unions (Türk-İş), claimed that the country “now unfortunately pays the price of the privatizations of the core duties of the state, notably of health care.” The overall results of the privatization policies since 2004 have indeed earlier been called into question, with critics arguing that the results have been negative on public health, the quality and quantity of health care services and on health care staff in general. In an open letter, a group of leading social scientists called on abandoning neo-liberalism and embracing public solutions. The left-wing academics made the case for universal, public health care, demanded that public and private hospitals now provide health care free of charge and called for the socialization of private hospitals that refuse to comply.

IMPLICATIONS: Such demands are unlikely to be heeded. However, it is noteworthy that a conservative like Ahmet Davutoğlu warns of the risk of a “social explosion” if the government fails to live up to its social obligations. Presumably, the AKP government calculates that it can safely ignore the complaints of labor. The trade unions are weak; only ten percent of Turkey’s 14 million workers are unionized and ninety-five percent of the labor force work without a collective bargaining agreement. The vast majority of workers support the AKP, and they have not shown any signs of being on the verge of abandoning it in spite of their worsening economic conditions in the last two years.

Still, the pandemic might prove to be a disaster that leads to radical change by giving new credence to the idea of the social state. But change is not likely to originate in the sphere of party politics. Turkish politics has long since suffered from what is a universal reluctance to challenge prevailing class policies. Turkey’s hegemonic conservatism – which is presently represented by the AKP and its partner the Nationalist Movement Party (MHP) – has not had to face any challenge from the left since the late 1980s. The radical left is insignificant and the mainstream left, represented by the CHP, does not take issue with free market policies.

Kemal Kılıçdaroğlu, the CHP leader, has stated that it was a mistake by the left in the past to call for income redistribution. Kılıçdaroğlu also argues that the left-right divide has become irrelevant and that the only divide that matters is the one that separates democrats from authoritarians. Yet insofar as the authoritarian state in Turkey has historically served the business class, the left-right divide and class divisions are anything but irrelevant to the question of democracy and the endurance of authoritarianism. The Turkish trade unions are weak because they have been rendered powerless by government regulations, and the neoliberal order was imposed at gunpoint, after the military coup in 1980. It was an expression of ideological and political continuity when the AKP government in 2018 banned a strike of 130,000 workers at 179 factories across the metal sector on the grounds that it was “prejudicial to national security.”

Turkish democrats – be they conservatives who have split from the AKP, liberals or social democrats – pretend that Turkey’s democratic problem can be reduced to the person of Erdoğan or at most to the state that he heads. Like in the case of the newly formed conservative Democracy and Progress Party (DEVA) – which means cure in Turkish – that is led by President Erdoğan’s former economy czar Ali Babacan, the self-described democrats set out to “protect the individual’s freedoms against the state.” Today, as the people of Turkey look to the state for protection, assailing the state is not going to be a winning strategy.

CONCLUSIONS: Historically in Turkey, change has come not after societal forces have succeeded in overturning the existing order, but after the state has decided that it was in its own best interest to endorse and promote change. This was the case with the modernizing bureaucrats of the late Ottoman era and it has been the case with their republican heirs who have nursed a capitalist development because they believed that it was going to make the state strong and prosperous as well. They were pragmatists who would not have had any compunction opting for socialism if they had concluded that it offered a more promising path for the state. A governor of the capital Ankara in the 1940s summed up this mentality perfectly when he said “if communism is what this country needs, we will bring it here.”

If the Covid-19 pandemic makes the Turkish state appear weak and incapable of offering adequate protection for the population, the state may well conclude that giving market forces a free rein is no longer in its own best interest. If the pandemic wreaks havoc in the fabric of Turkish society, with potentially destabilizing consequences, raison d’état may dictate that neoliberal class policies are abandoned in favor of economic redistribution from capital to labor.

Halil Karaveli is Senior Fellow with the Central Asia-Caucasus Institute   & Silk Road Studies Program Joint Center and Editor of the Turkey Analyst. He is the author of Why Turkey Is Authoritarian: From Atatürk to Erdoğan (Pluto Press)

More in this category: « Can Turkey Cope with COVID-19? Will COVID-19 Restrain Erdoğan's Syria Ambitions? »
back to top