For the second time since its founding in 1971, Turkey’s leading business organization has confronted a Turkish government and called on it to reverse its policies. On the face of it, TÜSİAD  is carrying the banner of democracy. However, its pleas for democracy ring hollow. What TÜSİAD deplores is not so much authoritarianism as economic instability. TÜSİAD would hardly endorse an expansion of democracy and strengthening of democratic rights that imperil the primacy of neoliberal capitalism. 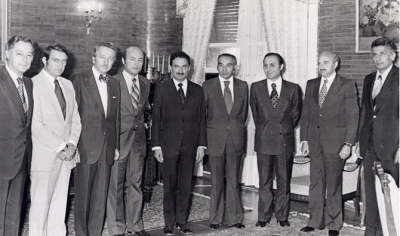 BACKGROUND: On October 19, the Turkish Industrialists' and Businessmen's Association (TÜSİAD) sharply criticized the economic performance as well as the authoritarian practices of the Turkish government. In a stunning break with its traditions, Turkey’s leading business organization made a strong plea for democracy. Tuncay Özilhan, a leading industrialist and the chairman of the High Advisory Council of TÜSİAD, called for the strengthening of the rule of law, of democracy and for separation of powers. “The state should be bound by the law in all its actions and the effective freedom of seeking rights should be guaranteed,” said Özilhan. The chairman of the High Advisory Council of TÜSİAD  called for pluralistic and participatory democracy and demanded that the rights and freedoms of Turkish citizens meet the standards of the European Convention on Human Rights. Finally, he called for the “strengthening the judiciary” and for the establishment of a “transparent, accountable, less centralized and effective public administration.”

In the same vein, TÜSİAD president Simone Kaslowski criticized the government's economic performance, reminding that the per capita income in Turkey has fallen below the level of 2007. But even more remarkably, Kaslowski challenged the Islamic conservative government by pointing out that secularism is the guarantee of freedom of religion. Moreover, the president of TÜSİAD observed that reduced freedoms are costing Turkey its best educated youth: “Our most talented, educated young people, our students, are looking for a future in other countries. Youth unemployment, the decline of freedom, and the decrease in the opportunities to establish a good life trigger a migration of this young, educated generation.”

Until now, TÜSİAD had remained pointedly silent about the anti-democratic practices of the government of President Recep Tayyip Erdoğan. Secularism, the rule of law and democracy have not featured among TÜSİAD’s priorities during the two decades-long rule of the Justice and Development Party (AKP). The question, therefore, is if its recent political demands reflect a genuine belief in liberal democracy. Have the business barons realized that sustainable growth will elude Turkey without democracy? Although it is possible, it is difficult to take TÜSİAD’s sudden advocacy for democracy and secularism at face value.

TÜSİAD was founded in 1971, as a response to the growth and militancy of the labor movement. As the conflict between left and right and between labor and  business interests escalated into street violence in the 1970s, TÜSİAD gained notoriety as an anti-democratic force. The business organization notably helped bring down the government of the social democratic prime minister Bülent Ecevit in 1979.

The business barons welcomed the 1980 military coup that neutralized the threat from the left and ushered in the neoliberal capitalism that they had been calling for. In a letter to the junta leader Kenan Evren, Turkey’s leading industrialist, Vehbi Koç, welcomed the coup and offered his services, writing, “At your service. I am ready.”

The AKP has preserved the neoliberal capitalist system that was put in place by the military in the 1980s, with TÜSİAD members being its principal beneficiaries. The most striking example of this is Koç Holding, Turkey’s leading industrial group.

Last year, Koç Holding's total turnover amounted to 184 billion TL while the turnover of Sabancı Holding, its closest rival, remained at 104 billion TL. However, before the AKP era, the difference between Koç Holding and its competitors was not as big as it has now become. In 2000, for example, Koç Holding’s consolidated turnover was $6.6 billion while Sabancı Holding’s stood at $5.6 billion. The economic policies of the AKP government, with massive programs of privatizations worth $60 billion, have contributed to the unstoppable rise of Koç Holding during the last two decades. The acquisition of Tüpraş, the state oil refinery company and Turkey's largest industrial company when it was privatized 2005, in particular helped put Koç Holding ahead of its rivals.

The AKP government has also stood by business interests by clamping down on labor. Nearly all strikes at TÜSİAD member companies have been banned by the AKP government. Even though the right to strike is nominally protected by law, strikes are still banned on the grounds that the interruption of production would prejudice general health and national security.

IMPLICATIONS: This commonality of interests notwithstanding, relations between big business and the Islamic conservative government have from the beginning been marred by an intra-class conflict. While sensitive to the needs and interests of TÜSİAD members, the AKP government has also sought to promote TÜSİAD’s rivals, the culturally conservative businessmen and industrialists in Anatolia that were instrumental in bringing the AKP to power. Until the AKP’s rise, the latter, who are organized in MÜSİAD (The Independent Industrialists' and Businessmen's Association) did not enjoy the kind of political and bureaucratic connections that the TÜSİAD members had successfully exploited during previous governments. While selling off state companies to TÜSİAD members and protecting them from the demands of labor, Erdoğan has simultaneously held them to represent the “old Turkey,” a group of bosses “drinking whiskey in their mansions by the Bosphorus.” Yet in a basic sense, Erdoğan has upheld “old Turkey.”

This contradiction of shared class interests and, in the case of Erdoğan, simultaneous cultural estrangement, and in the case of TÜSİAD fear of the government, has defined the relations between them. While TÜSİAD members have prospered under Erdoğan, the organization has been wary of standing by members who have been targeted by the government. When the group of Aydın Doğan, a member of TÜSİAD and once Turkey's leading media baron, was fined $4.5 billion in taxes in what turned out to be a successful operation to silence critical media voices, the business barons crouched in fear. Aydın Doğan was forced to sell off his media empire to the Demirören Group, which is close to the government, spelling the end of the TÜSİAD sphere’s control of Turkish media. Doğan was greatly disappointed by the fact that TÜSİAD members did not object to the punishment imposed on him. Mehmet Y. Yılmaz, who was the editor-in-chief of one of Doğan's newspapers, remarked that “Turkey's big bourgeoisie did not stand behind Aydın Doğan.” He took this as proof that “they are only looking after their own personal interests, incapable of assessing where the country is heading.”

However, it has become increasingly clear to the business community that the system that Erdoğan is presiding over is inimical to its interests; the economic crisis into which Turkey has been sinking ever deeply into since 2018 is fundamentally political. The main indicator of the crisis is the sharp depreciation of the Turkish lira. The lira has lost nearly 40 percent of its value against the U.S. Dollar in 2021. Since 2018, when Turkey switched to the presidential system, the depreciation has reached 157 percent. Inflation has risen to 20 percent. The depreciation of the lira and high inflation have destabilized the Turkish economy; and those who have been most adversely affected are those businesses that are in most debt and that have made the biggest and longest-term investments, that is, the biggest companies. They, in turn, are members of TÜSİAD.

The depreciation of the lira and the country’s economic instability stem from the heterodox economic policies implemented after Turkey's transition to the presidential system. It is well known that Erdoğan defines himself as the enemy of interest rates, and sees high interest rates as the root of all evils. The presidential system has provided Erdoğan with the opportunity to execute his heterodox economic doctrine without being bound by any restrictions or limitations. One of the first steps towards this was the dismissal of Mehmet Şimşek, who served as Turkey's finance minister until 2018, and who had worked at the American investment bank Merrill Lynch – and the appointment of Erdoğan's son-in-law, Berat Albayrak in his place. Albayrak became the flag bearer of Erdogan's interest policy. During his term, the Turkish Central Bank reduced the policy rate from 24 percent to 8.25 percent. In 2019 and 2020, $ 128 billion were spent from the Central Bank's reserves to support the lira. But to no avail. The Turkish economy was plunged into great instability.

CONCLUSIONS: For the second time since its founding in 1971, Turkey’s leading business organization has confronted a Turkish government. In 1979, TÜSİAD demanded that the social democratic government adopt neoliberal policies, which precipitated the fall of the government and ultimately undermined democratic rule itself. Today, TÜSİAD is on the face of it carrying the banner of democracy, calling on the Islamic conservative government to respect democracy, the rule of law and secularism. However, TÜSİAD’s insistence on democracy rings hollow. The business organization did not object to any of the AKP’s democratic transgressions during the last twenty years, when the economic policies of the government served it.  It’s highly doubtful that TÜSİAD would have broken ranks with a government whose policies have enriched its members if Erdoğan’s recent monetary policies had been less heterodox and had not destabilized the Turkish economy.

The democratic sincerity of Turkey’s business barons would be tested if the opposition, center-left Republican People’s Party (CHP) were to come to power, attempt to implement redistributive income policies that favor the working class, and endeavor to re-establish workers' rights. TÜSİAD would very likely respond in the same way as it did 1979, when it subverted the CHP government.

What TÜSİAD deplores is not so much authoritarianism as economic instability. TÜSİAD would hardly endorse an expansion of democracy and strengthening of democratic rights that imperil the primacy of neoliberal capitalism.

Barış Soydan is a columnist at the Turkish news site t24 This email address is being protected from spambots. You need JavaScript enabled to view it.

More in this category: « Kavala, the Ten Ambassadors and Erdoğan’s Orwellian Descent Closing Down Democracy – The Prosecution of the HDP »
back to top