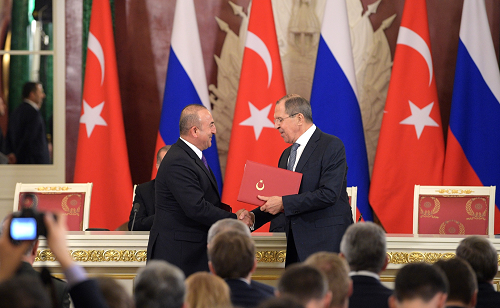 BACKGROUND: The realization of Turkish Stream has been frozen due to strained political relations between Moscow and Ankara, which worsened after Russia decided to get involved in the Syria war to back president Bashar al-Assad. Furthermore, in November 2015 a Turkish jet downed a Russian warplane after it violated Turkish airspace despite multiple warnings. This incident sparked a crisis between Russia and Turkey, lasting until the summer of 2016 when Moscow and Ankara decided to restore economic ties and bring Turkish Stream back on the agenda. This seems like a tactical rapprochement; whereas Russia and Turkey continually pursue different policy objectives in Syria, both countries expect benefits from realizing the pipeline.

In conjunction with the planned Nord Stream-2 pipeline, Turkish Stream will enable Moscow to terminate gas transit through Ukraine. Moreover, it will allow Gazprom to expand its presence not only in the Turkish but also in the South European market, where its share faces competition from incoming Caspian gas. Yet Turkish Stream is less important for Turkey than for Russia. Turkey’s booming domestic gas market indeed needs additional volumes of gas but Turkey will not benefit from bringing in larger volumes of Russian supply because it faces the danger of becoming too dependent on a single supplier. Also, Turkey risks becoming a transit state rather than realizing its long-standing goal of becoming a natural gas hub for Europe. The revival of Turkish Stream is primarily a tactical move by Ankara to reset relations with Russia in order to ease the sanctions that Moscow imposed on Turkish businesses. Also, in light of Ankara’s deteriorating relations with the West, improved ties with Russia grants Turkey a stronger hand in dealings with its Western partners.

The Turkish Stream IGA envisages that the project will consist of two pipeline branches, each with an annual capacity of 15.57 billion cubic meters (bcm/y). Turkish Stream’s first branch will bring natural gas to Turkey’s domestic market. The second pipeline stretch is envisaged to carry Russian supply from Turkey’s border with Greece to Europe. According to the agreement, Russia will construct and own the maritime threads of the two pipeline branches, while Turkish BOTAŞ will own the land part of Turkish Stream. The construction of both branches is planned to end in 2019.

Russia is also actively seeking ways to bring its gas to Southern Europe. Two energy projects are currently on the agenda, which could serve this purpose: the Interconnector Turkey-Greece-Italy (ITGI-Poseidon) and TAP. Gazprom and it partners, Greece’s DEPA and Italian/French Edison, revived ITGI-Poseidon in February 2016 to transit Russian natural gas through Greece and continue to Italy. The second option, TAP, is far more controversial since it is a part of the Southern Gas Corridor designated to carry Azerbaijani gas to Europe in a bid to diversify the EU’s gas supplies with non-Russian gas.

IMPLICATIONS: Political will apparently exists to complete Turkish Stream, but actual construction of the pipeline may be impeded by several factors. Gazprom plans to finance the offshore part of the pipeline independently, but the company’s financial situation is currently deteriorating due to the plunge in natural gas prices. The energy giant faces a continual decrease in revenues caused by shrinking gas volumes and lower supply prices. In addition, Gazprom’s access to international credit markets is limited in the wake of Russia’s conflict with Ukraine. At the same time, Gazprom is currently engaged in other large, money-consuming pipeline projects such as Nord Stream-2 and the Power of Siberia pipeline to China. The financial constraints caused by the expansion of Nord Stream have already pushed Gazprom to scale back Turkish Stream, which was initially to carry 63 bcm/y through 4 pipeline branches.

Several potential obstacles exist to the extension of gas supply from Turkish Stream to European markets. One proposal envisages using the Southern Gas Corridor (SGC) infrastructure, namely the Trans-Anatolian Pipeline (TANAP) and TAP for transit purposes. This option is potentially tempting for Russia, because both pipelines are currently under construction and set to be completed in 2018-2020. Gazprom will therefore not have to build costly infrastructure on its own. TANAP’s initial capacity of 16 bcm/y can be extended up to 31 bcm/y and the pipeline can thus be utilized by other than Azerbaijani suppliers. Moreover, the pipeline is located outside the EU, meaning that Gazprom would not be bound by Third Energy Package regulations. Similarly, TAP’s initial capacity of 10 bcm/y can be doubled to 20 bcm/y. According to the rules set by the European Commission, TAP’s expansion capacity is open for third party access, allowing Gazprom to enter the competition to book it. Two of TAP’s shareholders, Italy’s Snam and Belgium’s Fluxys have already supported Gazprom in joining TAP.

If able to book part of TAP’s or TANAP’s capacity, Gazprom would retain its position in the South European markets and Turkey vis-a vis Azerbaijan, which is currently the sole gas supplier in the SGC project, and other potential SGC suppliers such as Turkmenistan or Iran. In particular, if Russian gas is pumped through TAP, this could cause competition with Azerbaijan for volumes and market share.

Even though TAP’s initial capacity is reserved exclusively for supply coming from the development of Azerbaijan’s Shah Deniz-2 (SD-2) gas field, Azerbaijan plans to increase gas output from fields other than SD-2. Over the last two years, the shortage of investment capacity caused by falling oil and gas prices in conjunction with growing domestic demand for gas has resulted in a smaller gas output than was previously estimated. Nevertheless, Azerbaijan’s gas output is predicted to grow to 27-30 bcm/y in 2020 and can potentially reach 42 bcm/y in 2025. In coming years, Azerbaijan may therefore reserve an additional share of TAP’s and TANAP’s capacity for its own gas. Similarly, the participation of other Caspian producers in the SGC project will inevitably reduce the space available to Gazprom, making its exports via this route less viable.

For this reason, a stand-alone pipeline dedicated to exclusively carrying Russian gas from Turkey to European markets is a far more attractive option for Gazprom, which decided to resume the ITGI Poseidon project. The pipeline was originally intended to carry Azerbaijani gas from Turkey to Europe, but lost out in competition with TAP. Gazprom and ITGI shareholders want to resume the project, which has already received the necessary authorizations and exemptions in accordance with EU law, and boost its capacity to 20 bcm/y. Greece strongly backs the project, which can enhance its role as an energy transit state. However, the EU has already expressed its skepticism towards Poseidon’s revival, because other pipelines carrying Russian gas are not used to their full capacity and there is no demand for additional volumes of gas coming from this direction. Moreover, Poseidon’s planned route geographically mirrors TAP’s and can upon completion create unwarranted competition with this project, which is strongly favored by EU.

CONCLUSIONS: Gazprom might be able to complete the Russo-Turkish offshore branch of Turkish Stream, although the energy company’s precarious financial situation could delay the implementation of the project. However, Turkish Stream faces similar obstacles to bringing Russian gas to Europe as did its predecessor South Stream. Moscow can again find itself on a collision course with the EU, which deems the presence of Russian gas in the SGC or ITGI-Poseidon as unwanted competition to energy infrastructure projects promoted by Brussels.

More in this category: « “Weaponizing” the Diaspora: Erdoğan and the Turks in Europe Turkey and Russia: Aggrieved Nativism par excellence »
back to top