Normalization between Armenia and Turkey: Can it succeed?

In mid-December 2021, Turkey and Armenia mutually appointed envoys for upcoming normalization talks. Turkey has wider, strategic reasons for seeking reconciliation with Armenia, and the shift in the balance of power in South Caucasus since the second Karabakh war in 2020 has removed an obstacle for the pursuit of these ambitions. At first glance, the new rapprochement process promises to be more successful than the last time, in 2009, but ultimately the success of the rapprochement will depend on the trajectory of the relations between Armenia and Azerbaijan. Even though Yerevan realizes that it stands to benefit from a normalization of relations with Turkey, there is nonetheless a risk that its conflict with Baku, and the fear that the Armenian public might not stomach what would appear to be concessions to Azerbaijan, will prevent the Armenian government from pursuing the normalization. 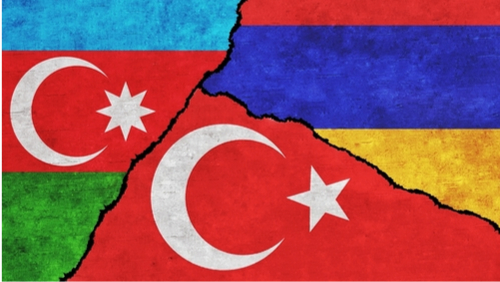 BACKGROUND: On January 14, 2022, Turkish and Armenian envoys arrived in Moscow for the start of the normalization talks between Turkey and Armenia. On December 13, 2021, Turkey’s Minister of Foreign Affairs Mevlüt Çavuşoğlu announced that Turkey and Armenia would appoint envoys on a reciprocal basis to pursue a normalization process. The announcement was confirmed by the Armenian ministry of foreign affairs, which reiterated that Armenia is ready to normalize relations with Turkey “without preconditions”.

Turkey appointed Serdar Kılıç, a former ambassador to the U.S., as a special representative for the normalization talks. Meanwhile, the deputy chairman of Armenia’s National Assembly, Ruben Rubinyan, was named Armenia’s envoy. Unlike his Turkish counterpart, Rubinyan is a young politician with no background in diplomacy. Rubinyan has a field experience in Turkey as a research fellow, but some Armenian commentators expressed concern that a non-diplomat will be less successful as a negotiator.

Both countries are also preparing to re-launch international charter flights between Istanbul and Yerevan. On January 4 Armenia lifted a short-lived ban on Turkish goods which it imposed on December 31, 2020 as a result of Turkey’s support for Azerbaijan in the second Nagorno-Karabakh war that year. Furthermore, the Armenian government decided not to extend the ban because of improving political relations with Ankara; also, the embargo has hurt Armenian businesses that rely on trade with Turkey.

These developments were preceded by an exchange of positive messages between the countries. In August 2021, Armenian Prime Minister Nikol Pashinyan said that Yerevan was receiving positive signals from Turkey to normalize relations. Soon after Turkish President Recep Tayyip Erdoğan declared that Turkey is ready to “gradually normalize” its relations with Armenia and said that “we need a constructive approach in our region. Even if there are disagreements, neighborly relations should be developed on the basis of respect for territorial integrity and sovereignty”. Pashinyan proposed a meeting with Erdoğan to discuss issued related to the restoration of diplomatic relations between Turkey and Armenia, to which Erdoğan responded positively. Armenia has informed Moscow about its attempts to normalize relations with Turkey and asked for mediation, which Russia has accepted.

The last attempt at reconciliation between Turkey and Armenia in 2009 was aborted. Ankara had closed off its border with Armenia in response to the 1993 occupation by Armenia of the Azerbaijan’s Kelbajar region during the first war. In 2009, the situation in Nagorno-Karabakh and in adjacent regions remained largely unchanged and Azerbaijan reportedly regarded restoring the relations with Armenia as a betrayal by its close ally Turkey. However, since the second Nagorno-Karabakh war in 2020, which ended with victory for Azerbaijan (supported by Turkey), Baku is not likely to oppose a Turkish-Armenian reconciliation process as it did in 2009.

IMPLICATIONS: Turkey has wider, strategic reasons for seeking reconciliation with Armenia, and the shift in the balance of power in  since 2020, which has strengthened Azerbaijan, has removed the main obstacle for the pursuit of these ambitions. Ankara places high hopes in the realization of the transit corridor which was envisaged in the ceasefire agreement that was signed by Armenia, Azerbaijan and Russia in November 2020, at the end the second Nagorno-Karabakh war. The corridor would link Azerbaijan proper with its exclave, Nahçıvan, which borders Turkey, through the territory of Armenia. Such a corridor would not only provide Turkey with a direct land route to Azerbaijan, but moreover open a new communication channel with the Turkic countries of Central Asia, and ultimately with China.

The new connectivity opportunities which are about to open up with Central Asia has led Ankara to seek a stronger political integration of the Turkic republics. Recently, Turkey played a decisive role in upgrading the status of the Organization of Turkic States from an intergovernmental group to an international organization with a new structure and with a strategic agenda that envisions a deeper cooperation between the Turkic nations. But Turkey’s overture to Armenia is also grounded in an ambition to improve relations with the United States that have been severely strained after Turkey’s purchase of the Russian S-400 air defense system. Indeed it was reportedly a request from U.S. President Joe Biden that prompted Ankara to re-launch the attempt to normalize relations with Yerevan.

Meanwhile, as many in Armenia are convinced that Turkey helped to turn the tide to Azerbaijan’s favor in the last Nagorno-Karabakh war, the new opening with Turkey is sure to be unpopular. But the positive gestures of Armenian officials toward Turkey speak of realism and pragmatism at the political level. The normalization with Turkey promises to boost to Armenia’s tumbling economy.  Since the early 1990s, Armenia has been regionally isolated; Azerbaijan and Turkey have closed their respective borders with it, while Armenia’s relations with Georgia remain underdeveloped and distant. In response, Armenia has developed an overdependence on Russia in economic and security terms. But the Russian-Armenian relationship has been fraught with tensions. The wars over Nagorno-Karabakh in 2016 and 2020 as well as the latest border conflict with Azerbaijan have showed that Yerevan cannot count on Moscow -- that also wants to nurture its relations with Baku -- coming to its rescue militarily. This leaves Iran, whose relationship with Baku is on a downward spiral, as Armenia’s sole regional partner. The reopening of regional transportation and transit channels would break Armenia’s isolation; it would offer a welcome economic opportunity, giving Armenia direct railway and highway connection to Russia via Azerbaijani territory and a railway link to Iran through Nahçıvan.

At first glance, the new rapprochement process promises to be more successful than the last time. Clearly, there is a political will on both sides to push the process forward.  Nonetheless, there are strong signs that the normalization faces serious obstacles and that it risks being derailed as long as Armenia and Azerbaijan remain locked in conflict. Turkey refuses to normalize relations with Armenia without preconditions and has requested that Yerevan agrees to open the regional transport corridor through its territory which is intended to link Azerbaijan with Nahçıvan.

Even though Armenian officials have touted the transport link as beneficial for the country, the government is less than eager to push the matter forward. Yerevan’s back-and-forth position might stem from the fear of how the Armenian public will react to further concessions to Azerbaijan. Despite the fact that in January 2021 the leaders of Armenia, Azerbaijan and Russia established a tripartite working group to monitor the reestablishment of connectivity channels in the region, so far nothing has been achieved in this area. This has created frustration in Baku. Azerbaijan’s president Ilham Aliyev has reiterated on several occasions that Zangezur (a province located in southern Armenia which Armenians call Syunik) is a historic Azerbaijani province and has even threatened to take the region by force. In May 2021 tensions rose at the interstate border between Armenia and Azerbaijan as Azerbaijani forces advanced into Armenia proper and captured a chunk of its territory in the Syunik and Gegharkunik provinces.  Another serious flare-ups along the border happened in November 2021 and January 2022.

Armenian Prime minister Pashinyan has signaled that his government is in principle open to reestablishing communication routes in the region, including a railway and highway link through Armenia’s southern Syunik region; these transit links are essentially the same, but the Armenian government vehemently denies that the route in question would equate to a so-called Zangezur corridor which Azerbaijan and Turkey call to establish, lest this would signal an acquiescence in Azerbaijani territorial claims.

CONCLUSIONS: Recent political developments in the Armenia-Azerbaijan-Turkey triangle point in opposite directions: while the political climate between Yerevan and Ankara is improving, relations between Armenia and Azerbaijan remain hostile, notwithstanding recent meetings between Armenian and Azerbaijani leaders in Moscow and Brussels. Even though the meetings raised hopes of a return to diplomacy, they failed to produce any de-escalation between Baku and Yerevan.

Even though Yerevan realizes that it stands to benefit from a normalization of relations with Turkey, there is nonetheless a risk that the fear of that the Armenian public might not stomach what would appear to be concessions to Azerbaijan will prevent the Armenian government from pursuing the Armenian-Turkish normalization.

More in this category: « The Collapsing Lira: Is it a Threat to the Turkish Regime? Turkey's Inflation Crisis Reveals Systemic Weakness in Turkey's Food Security »
back to top