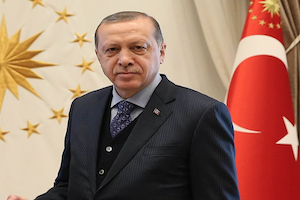 BACKGROUND: Speaking before a gathering of his ruling Justice and Development Party (AKP) on September 4, 2019, Erdoğan complained that, “Some countries have missiles with nuclear warheads, not one or two. But (they tell us) we can’t have them." After which, Turkey's president declared "This, I cannot accept.” Portraying the issue as matter of Turkey’s right as a rising nation, Erdoğan then went on to erroneously assert, “There is no developed nation in the world that doesn’t have them.”

Erdoğan’s remarks surprised many observers since Turkey is a signatory to both the nuclear Non-Proliferation Treaty and the Comprehensive Nuclear-Test Ban Treaty. In contrast to Erdoğan's depiction, Turkey has voluntarily committed itself not to develop nuclear weapons as a matter of international law. Erdoğan’s reformulation of the acquisition of a nuclear weapons capability as a sovereign right denied to Turkey signals that Ankara is shifting its long-held policy concerning nuclear weapons and their delivery systems.

Amidst Ankara’s fraying relationship with Washington over the fate of northeastern Syria compounded by tensions over Turkey’s drilling operations in Cyprus’s declared exclusive economic zone as well as Turkey’s purchase of the Russian S-400 air defense system, Erdoğan’s remarks were, in part, aimed at the tactical nuclear weapons (TNWs) that the United States maintains in Turkey.  Critics in Washington of Turkey’s recent policies have started to advocate for the TNWs’ removal.

The U.S. maintains around 50 B-61 nuclear gravity bombs in Turkey, comprising one-third of the United States' total arsenal in Europe. These TNWs are secured and maintained in Turkey's Incirlik base by some 500 U.S. Air Force personnel from the 39th Weapons Systems Security Group. The remaining 100 B-61 nuclear bombs are located in Italy, Belgium, Netherlands, and Germany. With TNWs positioned among these four nations, the U.S. has no need to maintain B-61 bombs in Turkey in order to provide deterrence for the 27 European members of the NATO alliance.

Turkey's acquisition of the Russian S-400 air defense system may, in fact, render the B-61 bombs at Incirlik undeliverable in the case of an actual TNW mission.  To deliver such weapons, a nuclear-certified strike package would need to be deployed in Turkey with the Turkish air force possibly providing fighter escorts or aerial refueling.  The strike package’s complex operations cannot be conducted within the Turkish air space covered by the S-400 system. Under these circumstances, the U.S. has little incentive to modernize the B-61s based in Incirlik under the B-61 Life Extension Program.

Despite the fact that by acquiring the S-400 system Turkey seems to have nullified the B-61’s value as a deterrent, the U.S. cannot easily withdraw its TNWs from Turkey.  On a symbolic level, the removal of the B-61s from Turkish soil would be portrayed in Turkey as a defining act that ended the U.S.-Turkey strategic relationship. As former U.S. Deputy Assistant Secretary of Defense for Nuclear and Missile Defense Policy Elaine Bunn famously explained with her analogy of wedding rings, the removal of TNWs by one side of an alliance is akin to a spouse who ceases to wear a wedding ring – an act that clearly signals a high level of commitment to the relationship has been retracted.  While Erdoğan’s remarks served to place the onus unambiguously on the United States, his remarks also indicate a larger strategic intention on Ankara's part.

IMPLICATIONS:  In his remarks, Turkey’s president did not declare any specific initiative to acquire nuclear weapons, but he did not preclude the possibility either by reaffirming Turkey’s treaty commitments.  However, it would be a mistake to interpret Erdoğan’s remarks as merely an extension of his ongoing protest of Turkey’s middling status in the global security architecture encapsulated by his trademark slogan, “the world is bigger than five.”

Many analysts have done just that, dismissing any immediate significance to Erdoğan’s remarks because Turkey lacks the basic scientific and technological infrastructure to develop a nuclear weapons program, specifically to produce weapons-grade fissile material, be it uranium or plutonium.

Turkey’s only nuclear facility currently under development is the troubled Akkuyu nuclear power plant in Mersin.  Although the $20 billion project was awarded to Russian nuclear technology giant Rosatom in 2010, construction only began on the plant in 2018, pushing its start date for operations to 2023. Even when operational, the build-own-operate terms of Rosatom’s contract means that the company will be running essentially a Russian plant inside the country to service Turkey’s domestic power demand. Rosatom’s terms of operation include a fuel supply contract under which it will reprocess spent fuel and then return the more innocuous vitrified form of the nuclear waste to Turkey for storage, providing Turkey with no opportunity to develop fissile material.

Although the increasingly complex and wide-ranging partnership that is evolving between Moscow and Ankara could lead to a different form of nuclear cooperation in the future, the current terms of Rosatom’s operation in Turkey are far from conducive for proliferation.

Nonetheless, Turkey's policy shift may be gleaned by Erdoğan’s additional remarks highlighting the value of nuclear weapons for strategic deterrence when he raised the example of Israel’s nuclear weapons capability. Presumed by the international community to possess a nuclear arsenal, Israel officially maintains a policy of ambiguity, neither confirming nor denying the possession of nuclear weapons. “We have Israel nearby, as almost neighbors," Erdoğan said, and continued by commenting on Israel's nuclear arsenal, "They scare (other nations) by possessing these. No one can touch them.”

Turkey can claim no such deterrent capability, despite the fact that, with the second largest army in NATO, it fields considerable conventional war fighting capabilities.  Turkey's deficiencies in strategic weapons systems limit Ankara's ability to project power and maintain deterrence vis-à-vis its regional rivals.  Ankara's desire to rectify this strategic lacuna can be seen in its efforts to create a genuine blue water navy and to develop Turkey's Long-Range Air and Missile Defense System (T-LORAMIDS). To accomplish the latter, Ankara has concluded a joint development agreement with the Franco-Italian venture Eurosam, as well as a separate deal with Russia for the immediate purchase of S-400 system.

Most significant of all is Ankara's drive to develop domestically produced ballistic missiles. Turkey lacks the capacity to affect the pattern of escalation that could take place between it and any of its major neighboring adversaries, a capacity known as 'intra-war deterrence'. Turkey's progress in developing its Bora line of ballistic missiles as an attempt to redress this gap was recently highlighted by Berlin-based Turkish defense analyst Can Kasapoğlu. The Bora-1 missile was first used in May 2019 during Turkey's Operation Claw in northern Iraq and was lionized in the Turkish media. The Bora missile proved itself to be a tactical game-changer.  The expansion of the Bora missile program to develop longer range ballistic missiles capable of carrying a nuclear warhead would put Turkey on the regional nuclear map.

CONCLUSIONS: The typical pattern of nuclear proliferation involves the aspiring nation to explode a nuclear device and then weaponizing the nuclear capability with nuclear warheads and the ballistic missiles to deliver them. For this reason, the U.S. and the EU have been particularly critical of Iran’s continued attempts to develop nuclear capable ballistic missiles in contravention of United Nations Security Council Resolution 2331 that formally enshrines the terms of the JCPOA along with a call upon Iran to refrain for eight years from developing ballistic missiles capable of delivering nuclear weapons.

There is also concern that Saudi Arabia, in contrast, could acquire an off-the-shelf nuclear weapons capability from Pakistan, combining such a capability with a domestically produced ballistic missile delivery system.

With Israel, Iran, and Saudi Arabia each potentially posing a nuclear threat to Turkey, Ankara’s calculus is rapidly evolving, as signaled by Erdoğan's remarks. Although couched in nuclear terms, Turkey is already at an unacceptable disadvantage in the regional power balance because of its lack of ballistic missiles, which reduces Turkey's ability to exert deterrence toward the Middle East's other major military powers.  Erdoğan's tough talk represents a sense of urgency that will likely be translated into policy through an acceleration of Turkey's ballistic missile program.

Dr. Micha’el Tanchum is a senior associate fellow at the Austrian Institute for European and Security Studies (AIES), a fellow at the Truman Research Institute for the Advancement of Peace, the Hebrew University, Israel, and non-resident fellow at the Centre for Strategic Studies at Başkent University in Ankara, Turkey (Başkent-SAM).  @michaeltanchum