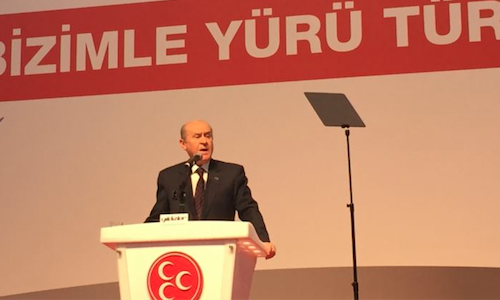 BACKGROUND: Turkish lawmakers on January 21 approved eighteen amendments to the constitution of Turkey that dates from 1982 that, if approved also by the electorate, will significantly curb the legislative powers of the parliament, abolish the post of prime minister and concentrate executive power to the presidency. 339 members of parliament – from the governing Justice and Development Party (AKP) and its partner, the Nationalist Action Party (MHP) – voted in favor. The constitutional amendments will now be put to a referendum, to be held in April.

Judged by the combined electoral weight of the nationalist-conservative block behind the constitutional amendments, the outcome of the referendum seems a foregone conclusion. Together, the AKP and the MHP represent over 60 percent of the electorate. In the last general election, which was held in November 2015, the AKP received 49.5 percent and the MHP 11.9 percent of the votes. However, significant defections from the respective bases of the two conservative-nationalist parties behind the amended constitution can be expected. On the one hand, the AKP risks alienating its Kurdish base with its alliance with the Turkish ultra-nationalist MHP. On the other hand, secularist-nationalist, Kemalist MHP voters will be reluctant to support amendments that concentrate all power into the hands of President Recep Tayyip Erdoğan.

MHP leader Devlet Bahçeli is appealing to his party’s base with the argument that the introduction of the presidential system is in the interest of the state and of the people, and that thus much more is at stake than the question of Erdoğan.  Crucially, Bahçeli is making the case that the new system ensures that Kurdish aspirations are checked by curbing parliamentarianism.

The argument that the Kurds will henceforth be denied the possibility of pushing their claims for local autonomy – as all executive power will be concentrated in a presidency which the Kurdish minority can never expect to occupy, in contrast to the parliament where they acquired a position to wield potentially significant political power after the general election in June 2015 – is indeed one that will resonate strongly among a majority of the Turkish electorate. The fate of the state is something that traditionally has mobilizing power in Turkey, but the AKP-MHP alliance is probably going to have to succeed in mobilizing the Kemalist electorate in favor of the amendments in order to compensate for the alienation of the Kurdish electorate. And that is unlikely to succeed.

IMPLICATIONS: Historically in Turkey, there is a relationship between the rise of emancipation movements and constitutional engineering, between the activation of class and ethnic conflict and the imposition of authoritarian constitutional arrangements in response to these class- or ethnic-based challenges to the established order. The recent rise of the pro-Kurdish and leftist People’s Democratic Party (HDP) in many ways parallels the rise of the left in the 1960s and 1970s, and it has triggered similar reactions: the formation of a nationalist-conservative alliance – the AKP-MHP alliance replicates the “Nationalist front” governments in the 1970s – and authoritarian-minded constitutional amendments in the “interest of the state.”

In the 1960s and 1970s, the Turkish right held that the 1961 constitution was too liberal, that it allowed leftist militancy and accorded too many rights to the trade unions. It was at this time that the idea of a presidential system was born. The first to propose the idea was the leader of the far right, Alparslan Türkeş, Devlet Bahçeli’s predecessor. Türkeş and others wanted presidential, strong-man rule, to protect the state against “communism.”

These wishes were partly heeded when the military took power in 1980 and subsequently imposed the present, authoritarian constitution.  Although it did not impose a presidential system, it was nonetheless a centralist, statist one. It translated the ambition of the right to limit and check leftist and Kurdish political expressions and parliamentary democracy, and it vastly increased the power of the state over society. The presidential system that is now being proposed takes the inherent logic of the constitution in place to its full conclusion. What was given a limited content in 1982, parliamentarism, is now to be done away with altogether.

The need to ramp up state authority further has arisen partly in response to the fact that what was put in place in 1982 has proved ineffective in shielding the established order from upsets from below, and partly in response to the fracturing of the state into rival, warring factions, which culminated with the attempted coup last summer. MHP leader Bahçeli has thus argued that the coup attempt made it urgent to shore up state authority.

Perry Anderson, a British Marxist historian, has observed that “Turkey could become a democracy so much earlier than Spain, a more advanced society – let alone other countries as economically and socially backward in the 1950s – because there was no comparably explosive class conflict to be contained, no radical politics to be crushed. Most peasants owned land; workers were few; intellectuals marginal; a left hardly figured. In these conditions, there was limited risk of any upsets from below. The elites could settle accounts between themselves without fear of letting loose forces they could not control.” But, as Anderson notes, “that degree of security would not last.” What was absent in 1950, when Turkey became a multiparty democracy – class fissures – would surface in the 1960s with the emergence of a working class, triggering calls for authoritarian rule from conservatives and from the far right; and the ethnic lines of fissures that did exist but that were concreted over would start to threaten the established order from the late 1980s and onward.

To paraphrase Anderson, Turkey was able to return to democratic governance a few years after the 1980 coup, because the class conflict that had erupted in the 1960s and 1970s was successfully contained. The oppression of the left by the military junta created a vacuum that was filled by Islamism, which was deliberately encouraged by a military that resorted to instrumental use of religion to sustain the societal order. And in the absence of the left, the claims of the popular classes were channeled, first to the Islamist Welfare Party and later to the AKP. Cihan Tuğal, a Turkish academic, has used the term “passive revolution” to describe how the popular challenge to capitalism was absorbed and neutralized by Islamism.

Under such circumstances, democracy – albeit a highly flawed one – did not have to be suspended as it had in 1980, even though the Islamists were “domesticated” by the guardians of the state order, who intervened in 1997 and forced the resignation of the first Islamist-led government of Turkey. Yet ultimately, the fact that the Islamists had replaced the left as the voice of the people helped maintain parliamentary democracy, as the “passive revolution” that they conducted during the 1980s and 1990s ensured that the popular classes, workers and peasants, did not rise to challenge the established order as they had done in the 1970s, when they had rallied to the social democratic left.

However, Islamic conservatism has proved to be much less successful in containing the ethnic conflict. That is ultimately why it has become urgent – from a state-centered perspective – to suspend parliamentarism. To once again paraphrase Perry Anderson, Turkey cannot remain a parliamentary democracy because there is an explosive ethnic conflict to be contained. Since the ten percent threshold to parliament is no longer a guarantee for keeping Kurdish parties out of parliament, the only recourse left for the self-appointed guardians of the order, such as MHP leader Bahçeli, is to move to replace parliamentary rule with presidential rule.

CONCLUSIONS: In Turkey, moves to amend constitutions deemed to be too liberal and to ramp up state power have invariably coincided with the rise of emancipation movements, be they social or ethnic. In the 1960s and 1970s, the rise of social democracy led the right to call for constitutional amendments to protect the state against “leftist subversion”. Today, the conservative-nationalist alliance of the AKP and the MHP similarly seeks to block the political influence of the Kurdish political movement that in the general election in June 2015 demonstrated its potential to upset the established order.

However, this time around, constitutional engineering may prove insufficient to protect the state. In fact, it has never been sufficient in itself. The concentration of power to the state with the 1982 constitution was also ideologically sustained: to contain and defuse the class conflict that had threatened the order, the Turkish state deployed not only repression, but equally made use of an ideology, Islamic conservatism, that helped pacify the popular classes.

The presidential system that is now being proposed may have all the appearances of strength, but it would crucially lack the ideological underpinning needed to similarly pacify and produce the consent of those whose claims that it is ultimately intended to neutralize. Indeed, the conservative nationalism of the AKP-MHP alliance could fall short of mobilizing a majority in favor of the constitutional amendments. It may be that Turkey can become neither a democracy nor put in place stable authoritarian rule because of its ethnic fissures.

More in this category: « The Turkish Referendum that Was Not Sounds, Silences and Turkey's Crumbling Core »
back to top