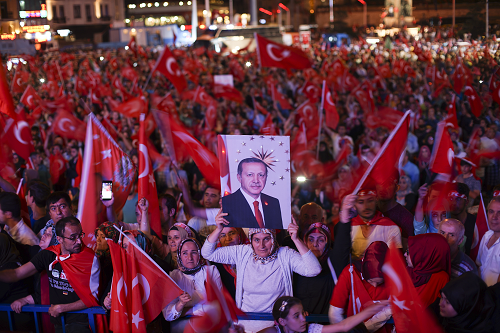 BACKGROUND: On April 16, the citizens of Turkey – in a narrow vote – decided to abandon the country’s parliamentary regime for an exceptionally powerful executive presidency. The Constitutional amendments in question will grant the president complete power to rule with impunity over the executive and the budget, and a considerable authority over the judiciary, while relegating the parliament to a shadow of its former self with minimal power of scrutiny. On paper, this is probably ‘the most radical political change since the modern republic’s foundation in 1923’ and ‘the culmination of a steady drift towards authoritarianism in Turkey which began a decade ago.

However, from a strictly practical perspective, it is possible to argue that there was hardly any point in the referendum. Despite all the hype within the “yes” and “no” camps, both of which considered it as the most important vote ever to be cast in the country’s history, one tended to miss that the referendum was not going to yield any major change in practical terms regardless of what the actual result was.

The “new” regime after the “yes” vote is largely going to be the same as the one that has already been in practice since August 28, 2014, the day Recep Tayyip Erdoğan took the oath of office and became the 12th President of the Republic of Turkey. For at least since then, Erdoğan has been ruling de facto as the executive President, acting with completely impunity upon the capacities these “new” amendments now proposed to grant him. Enjoying an absolute authority over the sheepishly loyal AKP government he has personally handpicked, Erdoğan has already been issuing executive decrees, dismissing and appointing ministers, managing the use of armed forces both within and beyond the country’s borders, nullifying the elections, dissolving the parliament, declaring a state of emergency, and ordering mass institutional purges and arrests of MPs, mayors, journalists, academics, businessmen and others.

If the amendments had failed to pass, there was no indication whatsoever that the current situation, where Erdoğan maintains a complete grip on power, would have changed. The very fact that the referendum was held under the current state of emergency (which has been in place for over eight months and can be extended indefinitely) was an obvious sign that the regime was not going to yield, even if the “no” side would have won.

Therefore, especially in the absence of any organized opposition or institutional limits to speak of under the ongoing state of emergency where his word is practically the law, it is not immediately clear what lay behind Erdoğan’s insistence to hold a referendum in the first place. It does retrospectively grant de jure cover to his de facto rule. Yet the question is whether it is even necessary to make all this look legitimate in a country where the sovereign can and does rule in a manner that is completely unrestrained by the principles of the rule of law and separation of powers, and either violently suppresses or turns subservient almost all entities that are designed to check and balance its power.

IMPLICATIONS: The significance of this particular referendum laid entirely in its symbolic and spatial dimensions, a combination of which constitutes the reason why Erdoğan and AKP government pushed hard for a referendum. On the one hand, the April 16 referendum was a symbolic act because it constituted an indispensable step to grant democratic legitimacy to Erdoğan’s one-man rule. That is, of course, insofar as democracy is crudely degraded to the unconstrained rule of a numerical majority, usually “gained” under highly questionable, unfair and opaque circumstances of campaigning, voting and counting. Nonetheless, a significant feature of the democratic hegemony of the post-Cold war era is that it is a symbolic one, obliging ruling classes to maintain the façade of democracy by displaying at least a nominal respect for its formal procedures. Even when it is obvious that a given regime is a dictatorship or a particular election is an utter sham, one has to act as if it is not in order to reproduce the democratic system.

This is the reason why many patently nondemocratic regimes feel obliged to call themselves democracies, such as the “Democratic” Republics of Congo, North Korea, and Laos. It is also the reason why regimes like those in Zimbabwe, Belarus or Central Asia still go through the symbolic ritual of “democratic” elections under conditions that all but negate the very point of holding elections in the first place. It is in this sense that Erdoğan needs those credentials to maintain the democratic façade of his regime, without which its deeply corrupt and increasingly violent rule is simply naked, but in a twisted and reflexive sense. The current regime in Turkey would have carried on undisturbed even after a “no” result. But those who have stood by it could not continue to do so in the absence of the symbolic efficiency provided by the “popular sovereignty” that enables them to disavow the brute facts of Erdoğan’s rule. That is to say, without the seal of approval that the April 16 referendum now is supposed to have provided, it would have been impossible to maintain the collective lie and keep acting as if the political regime in Turkey carries even minimal democratic legitimacy.

The April 16 referendum also served to further polarize and consolidate the bipolar hegemony in Turkish politics around the figure of Erdoğan himself, antagonistically dividing the society between two homogenous camps of Erdoğanists and anti-Erdoğanists. Diminishing the plurality of positions within the political space to a bipolar division of “yes” and “no”, it functioned as a litmus test that compelled all to disclose their “true colors” vis-à-vis the figure of Erdoğan.

It has already created an irreconcilable schism within the Nationalist Movement Party (MHP), the only significant competitor to the AKP for the country’s overwhelmingly right-wing electorate. Accusing the MHP leader and his clique of acting as Erdoğan’s fifth column, a sizable group led by several MPs rejected the official “yes” stance of the party and splintered off to campaign for a “no” vote. A similar yet less prominent line of division was discernible among the Kurdish political movements as well. An Erdoğanist minority had formed around the optimistic conviction that a victory in the referendum would give the president the necessary boost of power and confidence to restart the peace negotiations with the Kurds. However, that calculus looks less realistic – if it ever was – in the light of a victory for Erdoğan that underwhelming.

CONCLUSIONS: It is the maintenance and reinforcement of this particular antagonism, the bipolar form itself, which is of vital importance for the survival of Erdoğan’s and, by extension, the AKP’s hegemony. In the absence of any other mobilizing factors that used to enable the AKP government to consolidate and expand its support base (such as economic policies generating prosperity and growth, welfare policies offering social security, foreign policy success stories providing a sense of national pride and common identity) this pure antagonism based on a cult of personality that depicts every political conflict as a matter of life and death for the leader and “the people” that the president is supposed to embody is the only way for the AKP to remain in power. Thus, the April 16 referendum was ultimately an act of desperation on AKP’s part, which uses perhaps the only gun left in its war chest: Erdoğan.

In this sense, the referendum was also the ultimate expression of Erdoğan’s political narcissism, showing that he is willing to risk it all just to maintain his position in the spotlight and remain the locus of the Turkish body politic. In the midst of all that chaos, violence and noise, the April 16 referendum was ultimately a very expensive and reckless way of forcing every single citizen of Turkey to answer an essentially personal and, in fact, trivial question: Don’t you like Erdoğan? After over a decade in power alone, it is rather tragic to witness the crumbling of Erdoğan’s once mighty self-confidence into a sad question that begs for an affirmation of self-worth in the eyes of others.

Halil Gürhanlı is a Research Fellow in Political Science at the Department of Political and Economic Studies, University of Helsinki, Finland.

More in this category: « Walking for Justice: The Path Forward for Turkey’s Opposition Can “Constitutional Engineering” Once Again Succeed in Pacifying Turkey? »
back to top