BACKGROUND: Turkish-Israeli diplomatic, economic and military relations were unusual, extending even to a near-formal military alliance. By 2009 Turkish-Israeli bilateral trade was worth $2.58 billion, but the following year the relationship suffered a severe setback when Israeli military forces assaulted the "Gaza Freedom Flotilla’s" Mavi Marmara vessel killing nine participants. The incident chilled relations in both nations, but there are now some encouraging signs that point toward a possible thaw.

Turkey recognized Israel in 1949 and was one of the first nations to do so. Significantly, Turkey was the first Muslim country to recognize the Jewish state. In 1958, an Israeli-Turkish covert intelligence alliance was launched in a secret meeting in August 1958 in Ankara between Israeli Prime Minister David Ben-Gurion and Turkish Prime Minister Adnan Menderes, providing for collaboration and intelligence sharing between Turkey’s National Intelligence Agency (MİT) and Israel’s Mossad. In 1996 Israel and Turkey signed an agreement for military cooperation, which was to become the first bilateral casualty of the Mavi Marmara attack.

But cracks had appeared in the relationship before the 2010 Mavi Marmara incident, as national policies began to diverge in the wake of the ascent of the Justice and Development party (AKP) to power in 2002. The Turkish AKP government criticized the December 2008 Israeli Operation Cast Lead military action, launched in response to rocket fire from the Palestinian Gaza enclave. Three years earlier, Turkish Prime Minister Recep Tayyip Erdoğan had paid his visit to Israel. In 2007 Israeli President Shimon Peres addressed the Turkish parliament, the first time an Israeli leader had addressed the legislature of a Muslim nation.

Nevertheless, relations had sufficiently frayed in the aftermath of Operation Cast Lead and hit a low in January 2009, at the Davos World Economic Forum in Switzerland. Erdoğan abruptly departed a panel discussion with Israeli President Peres after obliquely commenting “when it comes to killing, you know well how to kill.”  A further sign of mounting stress came in October 2009, when the Turkish Air Force Operations Command abruptly canceled Israel’s participation in the multinational Anatolian Eagle aerial exercise, held annually since June 2001. Israel, which found the Anatolian Eagle useful, as the Konya topography resembled that of Iran, has been shut out of the joint exercises ever since.

The May 31, 2010 Gaza maritime raid, against the flotilla organized by the Free Gaza Movement and the Turkish Foundation for Human Rights and Freedoms and Humanitarian Relief, intending to carry humanitarian aid and construction materials to break the Israeli-Egyptian blockade of the Gaza Strip, proved to be a defining moment in Israeli-Turkish relations. While the expedition was not authorized by the Turkish government, eight Turks and a U.S. citizen of Turkish origin were killed by the raid conducted by Israeli naval commandos attempting to force the ships to the Israeli port of Ashdod for inspection; mass protests in Turkey ensued. The Turkish Ministry of Foreign Affairs website diplomatically stated that bilateral relations were “adversely” affected by the Mavi Marmara incident, but the diplomatic consequences were immediate when Ankara recalled the Turkish Ambassador to Tel Aviv, leaving Turkey to be represented in Israel at the level of chargé d’affaires.

In the absence of what Ankara deemed an appropriate response, with the Erdoğan government demanding that Israel apologize, pay compensation and ease blockade restrictions in Gaza, diplomatic relations continued to deteriorate. Within a year however, Israel and Turkey informally attempted to reach an offline accord before the UN released its Palmer Report on the encounter. 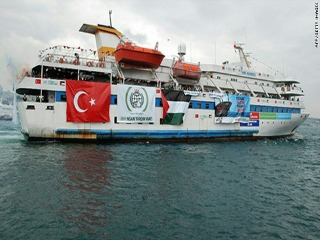 IMPLICATIONS: The Turkish-Israeli impasse is viewed highly negatively by the United States. Israel is one of the closest allies of the U.S. while Turkey, a longtime NATO-ally, is considered to be an important American partner. On March 22 2013, at the personal behest of U.S. President Barack Obama, Israeli Prime Minister Benjamin Netanyahu called Erdoğan to apologize for “operational mistakes” during the flotilla incident and pledged to compensate the families of those killed. In turn, Erdoğan agreed to restore diplomatic ties with Israel. However, so far a genuine détente between the formerly close allies has failed to materialize.

The public rift between Netanyahu and Lieberman underscored the ongoing sensitivity of the Mavi Marmara incident in Israeli politics. Given the stakes involved for the United States, it is likely that Washington will continue to exert influence behind the scenes in order to bring about an improvement of the Turkish-Israeli relations. Speaking at the Brookings Institution in Washington on November 18, Turkish Foreign Minister Ahmet Davutoğlu assured that "Strengthening our ties with the U.S. has always been the backbone of our foreign policy. ... It is a model partnership. No one in Ankara or Washington doubts that Turkish-U.S. relations will continue to be one of the main alliances in assisting resolution of regional issues in the coming years.”

However, these words echo less persuasively today than what used to be the case; it is no secret that the Obama administration is deeply disappointed that Erdogan has done so little to improve the relation with Israel after the telephone apology that was offered by Netanyahu after the intervention of the president. Indeed, Erdoğan did the very opposite when he accused Israel of being involved in the overthrow of Egypt’s President Mohamed Mursi.

Yet at the same time, Israeli-Turkish economic ties have in fact not only survived the Mavi Marmara incident but prospered, with the notable exception of the tourism sector. Bilateral trade between the two countries has quadrupled since 1999 and now stands at over $4 billion annually. Since the beginning of the Syrian civil war – which has deprived Turkey of its main export route to the rest of the Middle East -- Israel has assisted Turkey in the transportation of goods to and from Jordan.

According to a new report by the Israel Export and International Cooperation Institute, between January - September 2013, chemical exports to Turkey noted a significant, 66 percent rise in 2013, amounting to $1.8 billion, making it Israel's third-largest market. In a telling example, air traffic between Israel and Turkey has also soared by over 150 percent since the 2010 Gaza flotilla episode sent bilateral ties tumbling.

But, emphasizing the disparity between the two nations, while the total number of Turkish airline flights out of Ben Gurion Airport each week is 112, Israel has no airline flights on the route, due to Turkish concerns about Israeli security flight operations, with El Al flights being suspended since 2007.El Al’s CEO and president Elyezer Shkedy has given voice to Israeli exasperation, saying “What’s happening now between Israel and Turkey is unacceptable. This is something I can’t understand, honestly. I can’t understand how the leaders of the State of Israel allow this situation to continue.”

In the most interesting “street-level” statistic, Israeli tourism to Turkey has also plummeted since 2010. In 2011 the number of Israeli tourists visiting Turkey dropped sharply to 79,140, down from 311,582 in 2009, the last full year before the flotilla incident. The tourism sector between the two countries has yet to recover to its pre-incident level.

Last but not least, bilateral economic military relations have also suffered from the Mavi Marmara fallout. In September 2011, Ankara announced the suspension of defense ties with Israel and subsequently froze more than a dozen defense projects, including a $5 billion deal for hundreds of Merkava Mark III main battle tanks and a proposed $800 million sale of two Israeli patrol aircraft and an early-warning radar plane.

CONCLUSIONS: While the Islamist ideology of Turkey’s ruling party makes it unlikely that the relations between Turkey and Israel can be restored in a way that fulfills the expectations of the United States, there are also some signs that suggest that something of a working relation between Jerusalem and Ankara, based on mutual economic interests, can still be established. On 4 December, Israeli Environmental Protection Minister Amir Peretz arrived in İstanbul to participate in a United Nations-sponsored environmental conference related to the Barcelona Convention. Peretz served as Israeli Minister of Defense in 2006-2007 and as Deputy Prime Minister; his trip to attend the conference on Mediterranean marine and coastal environment issues marks the first official visit of an Israeli minister to Turkey since the Mavi Marmara raid.

What is now needed is a cooling of rhetoric on both sides. It will be a relief not least to the business communities in Turkey and Israel if the recent visit of the Israeli Minister Peretz to Turkey proves to have been a potential harbinger of a thaw.

Arguably, Israeli-Turkish bilateral relations were a win-win situation for both sides, which the ongoing and increasingly profitable nature of mutual economic relations has underscored. Trade can potentially serve as an ice-breaker between the two nations.

More in this category: « Erdogan, the Hizmet Movement, and the PREP School Crisis: Turkey Enters a New Power Struggle The Islamic Civil War in the Turkish State Escalates »
back to top