A “Pipe Dream?” The Prospects of Turkey as a Hub for Russian Natural Gas Featured

Turkey has seized on the opportunity to bolster its standing as an “energy power,” but Russia’s offer to expand the existing Turk Stream pipeline and create a natural gas hub in Turkey seems to be a ‘’pipe dream’’ under current circumstances. The feasibility of the project is highly questionable. The Russian proposal may in fact not be seriously intended. Rather than a realistic goal, it appears mostly to be a window-dressing maneuver in order to put pressure on gas-deprived Europe. Yet even though there are several obstacles to its realization, and ultimately may not be feasible, the Russian proposition nonetheless offers Turkey a welcome opportunity to advance its long-standing goal to turn itself into an energy hub at the crossroads of Europe, Asia and the Middle East. 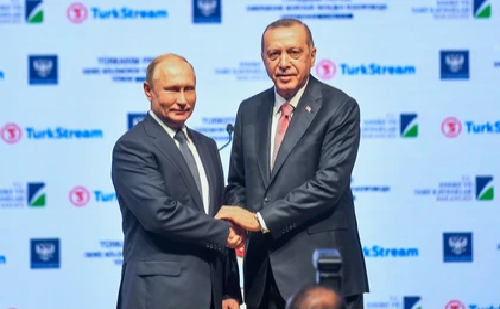 BACKGROUND: On October 13, 2022, in his meeting with Turkish President Recep Tayyip Erdoğan in Kazakhstan’s capital Astana, Russian President Vladimir Putin put forward a proposal to build a new natural gas pipeline to Turkey. Putin praised Ankara as a reliable partner in deliveries of Russian gas to Europe, and promoted Turkey as a new, future hub for Russian gas supplies. If the plans are realized, a gas trading and distribution center in Turkey would be established. Russian Deputy Prime Minister Alexander Novak provided further details, adding that Moscow wants to build additional strings of the Turkish Stream pipeline.

Putin’s proposal came after explosions in September rendered the North Stream 1 pipeline from Russia to Germany un-operational for the foreseeable future. Russia intends to reroute the supply via the Black Sea to Turkey rather than repair the damaged pipeline in the Baltic Sea.

Erdoğan welcomed Putin’s proposal and recommended to locate the prospective gas distribution center in Turkey’s European part, in Thrace, close to the borders of Bulgaria and Greece. Turkey sees an opportunity to realize its longstanding goal to become a natural gas hub. The Turkish president instructed Turkey’s Ministry of Energy and Natural Resources to immediately start preparations. The Russian offer is particularly well-timed as Turkey is grappling with its deepest economic crisis since President Erdoğan’s Justice and Development Party (AKP) came to power two decades ago. Soaring inflation and energy costs risk endangering Erdoğan’s reelection next year, while the governing AKP stands to lose its majority in parliament, if the opinion polls are to be believed.  In such circumstances, a natural gas hub in Turkey is an attractive idea to be presented to the voters, demonstrating that the government is capable of securing Turkey’s energy needs and able to counter rising energy costs.

IMPLICATIONS: Turkey has long sought to use its strategic geopolitical location between Asia, the Middle East and Europe to turn itself into an energy hub. Indeed, Turkey has succeeded in establishing itself as an important energy transit corridor and has persuaded several gas producers -- Russia, Azerbaijan and Iran -- to bring their supply to the Turkish domestic market or/and convey it to Europe. In the recent years Turkey has also emerged as one of the biggest LNG importers in Europe, and it has invested heavily to expand its natural gas infrastructure, including LNG terminals. Lately, Ankara has been courting the U.S. to increase the amount of liquified natural gas (LNG) it purchases and start a cooperation to deliver the supply to other countries in the region.

In the past few months, Ankara has intensified its efforts to attract gas providers to transit their supply through Turkish territory. But Turkey faces a difficult challenge. So far, Turkey has been sidelined in the regional energy cooperation between Israel, Egypt, Cyprus, Greece and the European Union. Energy interests are one reason why Turkey has reengaged with Israel after a decade of estrangement. Turkey wants to build a pipeline that would carry Israeli natural gas to Europe via Turkey.

Yet Turkey’s fraught relations with Greece and Cyprus remain impediments to the realization of its energy goals in the Eastern Mediterranean.  For the moment, it is Azerbaijan that offers Turkey the most promising natural gas transit option. According to the Memorandum of Understanding that was signed between the European Union and Azerbaijan on July 18, 2022, Baku has committed to deliver an additional 4 billion cubic meters (bcm) of gas to the EU this year and to increase the yearly transfers from the present 8 bcm to 20 bcm annually by 2027. The gas would be delivered through the Southern Gas Corridor (SGC) pipeline system which partially lies on Turkish territory. In addition, the EU has a strong interest to fill the SGC with gas from Central Asia, mainly Turkmenistan, but the chances for this are rather slim. Russia and Iran oppose the construction of the Trans-Caspian Pipeline which would link the gas reserves with the SGC system, and Turkmenistan is not inclined to jeopardize its relations with Russia and Iran.

Meanwhile, the Russian proposal to create a natural gas hub in Turkey may not be seriously intended. In fact, it appears mostly to be a window-dressing maneuver in order to put pressure on gas-deprived Europe rather than a realistic goal. First of all, it will be difficult to create a natural gas hub in Turkey which would be filled by only one producer – Russia. In order to turn itself into energy hub Turkey needs to be able to set the reference price for the supply and attract gas from different sources. If the gas comes only from Russia it will be up to it to set the price, leaving Turkey as it is today, as a mere transit country and not a gas trading center. And for the moment there is little likelihood of Turkey succeeding in bringing in gas from other directions.

Second, additional strings of the Turkish Stream are going to be difficult to build now as a consequence of the Western sanctions on Russia. Components and vehicles needed to construct the pipeline are produced mainly by European companies and thus fall under the EU sanction regime against Russia. The eventual Russo-Turkish pipeline deal might also trigger sanctions against Turkish companies involved in it. The existing two-line Turkish Stream pipeline was already sanctioned by U.S. President Donald Trump in 2019 but the construction works were too advanced to halt it. Given the fact that Washington has already been relentlessly pressuring Turkey to stop helping Russia to circumvent Western sanctions, the U.S. would definitely be more determined to pressure Turkey to drop the project, or even impose sanctions on Turkish and the companies involved in it.

Finally, the feasibility of the project under present circumstances is highly questionable. It is not clear who would going to purchase any additional volumes of Russian gas since the EU is determined to completely wean itself off its dependence on Russian gas by 2027. Indeed, Vladimir Putin himself recognizes this. The Russian president indicated that Europe must first display an interest in purchasing gas from any new Turkish Stream strings before Moscow commits to constructing them.

CONCLUSIONS: Russia’s offer to expand the existing Turk Stream pipeline and create a natural gas hub in Turkey seems to be a ‘’pipe dream’’ under current circumstances. Most likely it is part of Russia’s strategy to exacerbate an energy crisis in Europe during the heating season in order to weaken Western support for Ukraine. With the halt of flows through North Stream 1 Moscow likely hopes that European countries in desperate need of gas will resort to buying Russian supply anyway, while it seeks to weaken Germany’s role as a key energy hub.

Turkey on the other hand has seized on the opportunity to bolster its standing as an “energy transit power.” Even though there are several obstacles to the realization of the Russian proposal to create a natural gas hub in Turkey, and it ultimately may not be feasible, it has nonetheless offered Turkey a welcome opportunity to advance its long-standing goal to turn itself into an energy hub at the crossroads of Europe, Asia and the Middle East. Turkey remains committed to this goal.

Natalia Konarzewska is an expert and analyst with focus on political developments in the post-Soviet space.

More in this category: « Allies or Adversaries? The Confidence Gap between the U.S. and Turkey Needs to be Addressed The Middle Corridor Calls for Turkish-European Cooperation »
back to top