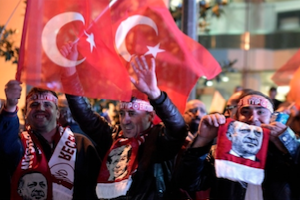 BACKGROUND: The result of Turkey’s November 1 general election restored the order of the last thirteen years. Four months earlier, on June 7, the voters had deprived the ruling Justice and Development Party (AKP) of its majority. Then, the AKP received 40.8 of the votes. On November 1, the Turkish ruling party scored its second biggest electoral victory when it received 49.4 of the votes, almost the same result as in the 2011 general election when the party got 49.9 percent. The AKP’s victory is equally impressive in absolute terms: On June 7, the party had received nearly 19 million votes; on November 1 the tally was more than 23 million votes of a total of 47 million valid votes. And while voter participation stood at 84 percent in June, this time 87 percent of the voters cast their ballots.

The losers of the election were the right wing Nationalist Action Party (MHP) and the left-leaning and pro-Kurdish Peoples’ Democratic Party (HDP). Both parties lost heavily to the AKP. The Kurdish HDP was the big winner of the June election, when it passed the ten percent threshold to parliament with a good margin; the party got six million votes then – 13 percent of the votes – and obtained 80 seats in parliament. This time, it barely managed to scrape over the threshold; it lost one million votes to the AKP, receiving little more than 10 percent of the total. The HDP will now have 61 deputies in parliament. The MHP, with 11.9 percent of the vote, saw a heavy shift of voters moving to the AKP.

Turkey’s ruling party benefited from the violence that has rocked the southeastern, Kurdish parts of the country since summer. After the June election, President Erdoğan declared that the peace process that the government had been conducting with the Kurdistan Workers’ Party (PKK) was dead. Erdoğan restarted the war with PKK, breaking the cease-fire that had been in place since 2013. The Turkish military was once again given free rein to engage the PKK inside Turkey and in northern Iraq. Kurdish cities in southeastern Turkey were turned into war zones, where the HDP was unable to conduct any meaningful election campaign.

The HDP – and the major opposition party, the Republican People’s Party (CHP) – were also intimidated after suicide bombers turned a peace rally in Ankara on October 10 into a carnage, with 105 people dead. After the Ankara massacre, the HDP and CHP cancelled their election rallies, lest more people would be massacred. The AKP, meanwhile, continued to hold its rallies undisturbed.

Given this, HDP co-chair Selahattin Demirtaş was justified to point out that the election had been anything but fair. Demirtaş claimed that the 10 percent that the HDP had received under such circumstances represented a “victory against fascism.” Nonetheless, the HDP’s loss of one million votes to the AKP is a major defeat. The party was unable to hold on to the conservative, religious Kurds who for the first time ever had shifted over from voting for the country’s leading conservative party to the secular, Kurdish nationalist party. These voters, in all likelihood, moved back to the AKP because they were not willing to continue to pay the price they had been doing since summer for having deprived the ruling party of its majority. In all probability, they reasoned that restoring order – with an AKP majority – is going to turn the clock back to the pre-June 7 era, when relative peace reigned in their region.

This does not mean that those Kurdish voters harbor any illusions about the tactics of the AKP. Indeed, President Erdoğan has been clear all along that the absence of an AKP majority would be cause for “chaos”. Yet the Kurdish voters were probably also turned off from the HDP by the militancy of the PKK, which willingly played its part in the “chaos” scenario that was enacted after the June election, by attacking Turkish soldiers and policemen.

The PKK could have chosen to respect the cease-fire; but the organization had no qualms about undermining the standing of the HDP, and the HDP did not manage to convey strongly enough the impression that it was emancipated from the PKK. And it is not certain that condemning the PKK would have saved the day for the HDP anyway; it would perhaps have kept a few conservatives, but instead risked alienating its Kurdish nationalist base.

IMPLICATIONS: The November 1 election once again demonstrated that the AKP excels at attracting different constituencies; while many conservative Kurds returned to the party, conservative Turkish nationalists from the MHP streamed over to the AKP as well. While the former returned home to the AKP in a quest for peace and security, the latter rewarded the AKP for having taken up arms against the Kurdish militants.

Finally, AKP voters who had abstained from voting in June went to the ballot. Last time, they stayed home because they were dissatisfied, principally, with the AKP’s management of the economy, yet were not prepared to switch to the opposition. The significantly higher voter participation on November 1 suggests that this group came out to vote for the AKP. The reason is probably two-fold: first, the economy was not the main concern this time, as it was overshadowed by security concerns; and secondly, the political instability since June, with no government being formed, created a longing for the pre-June era of stable AKP governance.

A result along the lines that had been predicted by the polls – a repeat of the June result – would have risked prolonging the violence. Now, it is in Erdoğan’s interest to call back the army from the Kurdish areas and instead offer the Kurds some kind of carrot, after wielding the stick has had the desired effect. Indeed, the future stability of the AKP regime is to a significant extent going to depend on its success – or lack thereof – in coping with the Kurdish challenge. Repression works to a certain point, but violence cannot be a permanent solution; continuing the war against the Kurds would undermine the stability of the regime.

The urban youth that took to the streets during the Gezi protests 2013 were never a threat to Erdoğan’s power, even though Erdoğan’s response created the impression that he was facing a popular uprising. His former allies, the Gülenists, were a much bigger threat since they more or less controlled the judiciary and the police. When they sought to bring him down – when Gülenist prosecutors launched their graft probes against AKP officials at the end of 2013 – Erdoğan had more reason to feel threatened, but he quickly managed to get the upper hand and succeeded in neutralizing the Gülenists, in part by restoring the standing of the military, which became his new ally. The Kurdish challenge is of a different nature.

The Kurds are not marginal, like urban ecologists in Istanbul. And unlike the Gülenists, an Opus Dei-like group that owed its power principally to its ability to manipulate the state apparatus, the Kurdish movement is a sociological force, speaking for a wide, societal constituency. Kurdish voters were intimidated to return to the AKP, but their aspirations will still have to be reckoned with.

The November 1 election is a huge disappointment for those who had pinned their hopes on the Kurdish movement as the force that was going to prevent Erdoğan from entrenching his authoritarian rule. The tactics of violence and intimidation paid off. Yet, disappointment should be tempered; the AKP has gotten its majority back, and while prospects for democracy in Turkey appear bleak, the HDP’s continued presence in parliament means that the ruling party is short of the majority that Erdoğan needs to change the constitution. That on the other hand, may ultimately matter less as the AKP’s majority ensures that Erdoğan’s de facto presidential rule will go unchallenged. Yet the long term stability of the AKP regime requires that the aspirations of the Kurds be accommodated.

CONCLUSIONS: The combination of military and deep state operations has rescued the power of the AKP, restoring its majority, but the Kurdish issue remains as challenging as ever for Turkey. It is still a major challenge to bring the Kurdish insurgency to an end, and returning to the status quo ante is not an option.

Erdoğan seems to think so, though, as he intimated during the election campaign that the process was going to restart if the election result was satisfying. Reviving the peace process with the PKK may require more than what Erdoğan has been ready to offer in the past.

Erdoğan can be expected to harbor the hope that a deal will eventually be struck with the Kurdish movement now that it has taken a severe beating, and that the HDP can be induced to lend support to constitutional amendments that introduce presidential rule. Yet the all-powerful Turkish president should probably not assume that he and his regime is out of the woods just because Kurdish voters were intimidated back into the fold this time.

More in this category: « Does the EU Care about Turkey's Democracy? Erdogan’s Pyrrhic Victory: The Turkish Election and the Prospects for a Presidential System »
back to top