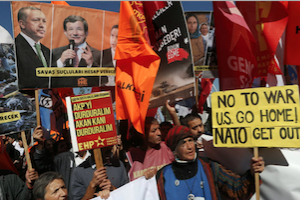 BACKGROUND: On January 12, a suicide bomber carried out an attack in Istanbul, killing ten German tourists. Within a few hours after the attack, Ahmet Davutoğlu, Turkey's prime minister, identified the perpetrator as a 28-year old Syrian who was said to be a member of “Daesh,” as the terrorist organization calling itself “Islamic state” (ISIS) is referred to by the Turkish authorities. "We have determined that the perpetrator of the attacDak is a foreigner who is a member of Daesh," said Davutoğlu. However, ISIS did not claim any responsibility for the attack.

The latest suicide bombing was the third in a row in Turkey since last July, and this one in Istanbul’s touristic center, the Sultanahmet square. It strengthens the impression that Turkey is facing a jihadist terror campaign that aims to destabilize the country and hurt its economy.  The “Islamic State” is also held responsible for the Ankara massacre on October 10, 2015 – the worst terrorist attack ever in Turkey that left over one hundred dead at a peace rally – and a bombing in Suruç near the Syrian border in July, at which thirty-three socialist and Kurdish youth activists were killed. However, even though officially held responsible for all three attacks, the “Islamic state” has not claimed responsibility for any of them, something that it normally has no qualms doing following deeds of this kind.

After the massacre in Ankara, President Recep Tayyip Erdoğan and Prime Minister Davutoğlu at first speculated that the Kurdistan Workers’ Party (PKK) or some militant leftist organization might have carried out the attack. The attackers in Ankara – two Turkish citizens – had in fact been under police surveillance for several months, and when asked why they had not been apprehended, Davutoğlu replied that “mere suspicion is not enough for detention of people since Turkey is a state that is governed by the rule of law.”

What sets the attack in Istanbul last week apart from the two previous suicide bombings is that it targeted Turkish economic interests by striking at tourists; in contrast, the victims in Ankara and Suruç were Kurds and leftists, opponents of the Turkish regime. The Kurds are also the enemies of the “Islamic state” in the war in Syria, and Kurdish forces have proved to be the only effective counterforce to ISIS. Hence, the bombers in Suruç and Ankara could easily be assumed to have been seeking revenge. The political logic behind the Istanbul bombing is much less evident. Assuming that the conclusion that the Turkish authorities have arrived at is correct, that ISIS did indeed carry out the attack, the question arises why the organization – or some other group or network affiliated with it – chose to attack Turkey and why it do so at this particular moment.

IMPLICATIONS: Since last summer, Turkey allows the United States to use its İncirlik air base for attacks against ISIS. But Turkey has not given any priority to participating in the U.S.-led effort to defeat ISIS. Ankara has, under American pressure, been forced to tighten the border with Syria; however, the border is far from sealed, with jihadists still able to cross it back-and-forth more or less freely.

The laxity of Turkish border security might to some extent be explained with bureaucratic disorder and management failures, as border control is not efficiently organized and several state agencies are involved. Yet there is also an ideologically and politically motivated collusion with the jihadists at work: Turkey and the jihadists in Syria share common enemies, the regime of Bashar al-Assad and the Kurds, who in July 2012 declared the cantons they control in northern Syria, Rojava (western Kurdistan) an autonomous region. Ever since, Turkey has lent logistical and other support to jihadist groups – chief among them Jabhat al-Nusra, al-Qeada’s affiliate in Syria (which is a rival of ISIS) and Ahrar al-Sham – in a proxy war against the Syrian Kurds whose main force, the Democratic Union party (PYD), is an offshoot of the PKK.

Crucially, the jihadists also benefit from an atmosphere of ideological identification with their cause among conservatives in Turkey, both at societal level and among the state elite. According to surveys, ten percent of the population in Turkey thinks that the “Islamic state” is not a terrorist organization.  Yet it is perhaps even more important that there is widespread endorsement in Turkey of the “Sunni cause.” The common view is that the “Islamic state” is an expression, albeit a militant and extremist one, of what is nonetheless a legitimate, Sunni defense struggle against Shiite power in Iraq and Syria – a response to the disempowerment of the Sunnis after the regime change that the United States carried out in Iraq after the invasion of 2003.

It is telling that even though the “Islamic state” is deemed responsible for what is the worst terrorist attack ever in Turkey, there are no indications of any efforts being undertaken to disrupt jihadist networks which are presumed to be strongly entrenched in the Turkish provinces bordering Syria. No mass detentions of suspected ISIS sympathizers have taken place, something which otherwise might have been expected after terrorist attacks whose perpetrators were identified as jihadists by the Turkish police.

Turkish journalist Ruşen Çakır, a specialist on Islamic movements in Turkey, argues that preserving Turkey as a safe haven is even more crucial for the jihadist networks today, after ISIS has come under strong international pressure in Syria. He furthermore notes that attacking the interests of the Turkish state would jeopardize not only jihadist entrenchment in Turkey, but also risk distracting Turkey in its struggle against the common enemy of the “Islamic state” and the Turkish regime.

ISIS and Turkey are fighting against the same enemy – the Kurds – and the jihadist organization has reason to be satisfied with the war that Turkey is waging against the Kurdish militants. Indeed, that war means that the PKK – officially under PYD flag – can no longer concentrate exclusively on the Syrian front, which eases the pressure on ISIS. Arguably, ISIS would not want to distract Ankara from pursuing its offensive against the PKK. In fact, there is little reason to expect that ISIS-labeled terrorism is going to prompt Ankara to shift focus and upgrade the “Islamic state” to its main enemy instead of the Kurdish movement.

The ideological discourse of the Turkish regime has not changed despite the string of terrorist attacks for which IS has been officially held responsible. The alleged acts of IS – the Ankara and Suruç massacres – has not prompted any strong-worded official Turkish denunciations of the presumed force behind the attacks or of the ideology that animates jihadist terrorism.

The reluctance to single out jihadist ideology as a threat was also on display after the Istanbul bombing. Prime Minister Davutoğlu registered his belief that there is a hidden hand behind the most recent ISIS suicide bomber: “the information that we have received has strengthened us in our conviction that there may be, behind the surface of the issue, important elements and influential actors behind the stage.  Daesh is now such an organization that it has become a pawn, a subcontractor, that is used for certain acts that need to be camouflaged,” said Davutoğlu. The pro-government media was quick to speculate about the identities of the presumed commissioners of the attack, with the daily Yeni Şafak naming the Syrian Baath regime, Russia and Iran as those who were possibly behind the Istanbul bombing.

CONCLUSIONS: After the Istanbul bombing, Erdoğan called for international endorsement of Turkey’s fight against “terrorism,” seeking to conflate defense against terrorism with the war that the Turkish army and the so called special operational forces of the police – notably its snipers – have been waging in Turkey’s Kurdish cities since last summer. According to Turkish human rights organizations, fifty-eight children had been killed by the end of 2015, several of them by snipers. The youngest was an infant three months old. Erdoğan reiterated that both PKK and IS are terrorist organizations. "Pick a side," the Turkish president said: "You are either on the side of the Turkish government, or you’re on the side of the terrorists."

The pattern was established in the wake of the suicide bombing in Suruç in July 2015: terrorist attacks that target opponents of the Turkish regime and for which the “Islamic state” is held responsible are used to legitimize a “war against terrorism” that is euphemism for Turkey’s new old war against the Kurdish movement.

The forces behind the terrorism that has struck Turkey during the last six months – the “important elements and influential actors behind the stage” to quote Prime Minister Davutoğlu – will in all probability never be exposed. As a rule, political violence remains unresolved in Turkey, the only exception being the acts of terrorism committed by the PKK. Nonetheless, it is ultimately enough to know which forces that have historically been served by political violence: the instigators may have remained in the shadows, but it has always been clear that the winners have been the advocates of authoritarian rule.

More in this category: « Turkey’s Alternative Gas Suppliers: Who to bet on? Dreams and Nightmares: Turkey’s Unspoken Drift towards Civil War »
back to top