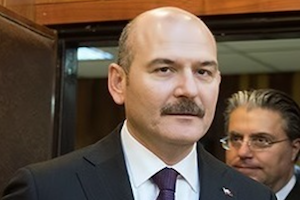 BACKGROUND:  Süleyman Soylu has been serving as interior minister since 2016, when he was appointed in the wake of the July 15, 2016 failed coup attempt. On April 12, 2020, Soylu handed his resignation, assuming responsibility for the botched implementation of the first weekend curfew in response to the Covid-19 outbreak. However, President Recep Tayyip Erdoğan rejected the resignation and in a statement endorsed and praised Soylu.

Süleyman Soylu was reportedly upset because he had been left alone to face the barrage of criticism that the curfew announcement unleashed; not only did AKP colleagues fail to side with him, some even openly joined the chorus of the critics. But Soylu’s move helped demonstrate that he enjoyed much broader support among AKP supporters than his internal critics, and the fervent support expressed by MHP supporters further served to underscore his unique position among his cabinet colleagues. Not coincidentally, Devlet Bahçeli, the leader of the MHP, was among the first to welcome the news that Soylu was going to remain at his position, hailing the interior minister and his “combative personality.”

Some observers speculated that Soylu’s resignation had in fact not been so much of an emotional act as it appeared to be, but rather calculated to take the measure of his support and shrewdly demonstrate his political indispensability and power.  One unnamed AKP official told Reuters that "it is no secret now that there has been a struggle and some issues between Berat Albayrak (the finance minister) and Süleyman Soylu for some time," and said that "Soylu’s resignation was an explosion from all this build-up." "The resignation showed that Soylu has something Albayrak does not have – assured support from the public," a former politician told this author. According to a recent poll conducted by MetroPoll Research, Soylu is the second most popular politician after Erdoğan among AKP and MHP supporters. While the gap between Erdoğan and Soylu is small, Soylu’s support is the double of Albayrak's support rate.

But Albayrak has another kind of support, support from his father-in-law, which makes him an heir rather than a rival. It should be remembered that Erdoğan in the past has never forgotten and forgiven similar moves, and even though broad support from the AKP-MHP base does empower Soylu, being seen as the second man also puts a target on his back.

IMPLICATIONS: Süleyman Soylu, who was born in 1970, hails from Trabzon on Turkey’s Black Sea coast, an area that has a reputation as a nationalist hotbed. Soylu began his political career in the 1990s in the center-right True Path Party (DYP). DYP was a successor to the Democratic Party (DP) and the Justice Party (AP), the two conservative parties that dominated Turkish politics from the 1950s to the 1970s. Both Soylu's father and grandfather had been active members of the DP and of the AP, and Soylu likes to point out that being in politics and loving the motherland are family traditions.

The DYP was founded in 1983. In 1991, DYP leader Süleyman Demirel (who had been the leader of the AP and led several governments during the 1960s and 1970s) formed a coalition government with the Social Democrat People’s Party (SHP) led by Erdal İnönü. When Demirel ascended to the presidency in 1993, Tansu Çiller became DYP leader, and Turkey’s first female prime minister. In 1995, Ciller’s DYP formed an ill-fated coalition with the Islamist Welfare Party of Necmettin Erbakan.

Soylu rose quickly in DYP ranks:  he was only 29 years old when he became the Istanbul Chairman of DYP, a position that he kept until he ran for parliament in 2002. Yet while Soylu’s career was gathering speed, his party was headed toward oblivion, eclipsed by the rising AKP. In the 2002 election, the DYP failed to pass the 10 percent threshold to parliament. DYP leader Mehmet Ağar, a former head of the Turkish police and interior minister, was unable to stop the bleeding. The DYP renamed itself the Democratic Party (DP) and merged with another formerly leading center-right party, the Motherland Party (ANAP), but the center-right electorate stayed with the AKP. Ağar resigned after yet another electoral debacle in 2007, and was replaced by Soylu.

The new DP leader enjoyed the support of Tansu Çiller, the former DYP leader. This speaks to the ideological continuity in Soylu’s political trajectory: as prime minister, Çiller – guided not least by Ağar – adopted hawkish policies favored by the military and security services to combat the insurgency of the Kurdistan Workers’ Party (PKK). These policies, and the human rights abuses that went with them, have since been resurrected with Soylu in charge since 2016. To many, Soylu appears to be the new face of Turkey’s notorious “deep state.” An opposition Member of Parliament, who asked not to be named, told this author that many in the political circles in Ankara recognize Soylu as Ağar’s successor. Soylu is seen as having revived the soul of the 1990s by empowering the security forces in their battle against the Kurdish movement.

Süleyman Soylu was not successful as party leader, and the DP continued its electoral downslide. He resigned in 2009, fell out with his party, and three years later accepted Erdoğan’s invitation to join the AKP, of which he had once been a harsh critic. Soylu called the AKP his “real home” when receiving his party badge, and assured that “there is no shift in our attitude.” He said that what mattered was being opposed to the center-left Republican People’s Party (CHP). Soylu was elected Member of Parliament from Trabzon in 2015 and subsequently entered the government as Minister of Labor and Social Security, becoming interior minister in 2016.

On the night of July 15, 2016, when members of the Gülenist fraternity attempted to take power in a military coup, Soylu was the only cabinet minister who was on the streets, and he rushed to the headquarters of TRT, the Turkish state broadcasting corporation, when the putschists overtook it. It is widely believed that his elevation in the cabinet was a reward for his performance on the night of the aborted coup.  As interior minister, Soylu, cultivating an image as a hardliner, has come to personify the unforgiving stance of the Turkish state against its enemies – the Gülensts and the Kurdish political movement. His hawkish stance on security issues has endeared him to right-wing nationalists, an electorate that the AKP and MHP share; Soylu has even been mentioned as a possible leader of the MHP after Devlet Bahçeli. Obviously, Soylu’s popularity is a threat to the ambitions of Erdoğan's son-in-law, Finance Minister Berat Albayrak, and the supporters of the latter have been targeting Soylu since 2017.

The Sabah newspaper, which is owned by Albayrak’s brother, conspicuously wrote that "some people in the AKP, who entered this party under the favor of Mr. Erdoğan, have started to assume power.” AKP trolls started to share incriminating photos of Soylu, aiming to discredit him as a fierce opponent of the Gülenists, and on one occasion shared photos of Soylu attending a wedding hosted by a suspected Gülenist. In 2018, the police was revealed to have wire-tapped Soylu’s phones. Subsequently, seven police officers had their postings changed. Ahmet Şık, a renowned investigative reporter, wrote that many in political circles in Ankara were pointing at Berat Albayrak as the mastermind of the wire-tapping and of the smear campaign on the Internet. Whatever the truth to these allegations, the animosity between the two rivals has been on open display on several occasions. Pro-AKP media outlets as well as the AKP elite in general has sided with Albayrak, but arguably, Erdoğan’s reliance on the MHP, which strongly favors Soylu, provides him with crucial shelter. In fact, it may have given him the upper hand against Albayrak.

CONCLUSIONS: There can be no doubt that Süleyman Soylu aspires to follow in the footsteps of Süleyman Demirel and Tansu Çiller --  his original mentors and predecessors as leaders of the True Path Party where he began his political career -- and thus become the next leader of the right in Turkey.

Because Soylu enjoys such broad support among right-wing nationalists, he has become the perfect embodiment the ongoing, ideological fusion of the AKP and the MHP on the latter’s terms. The combination of Soylu’s center-right inheritance, his enrollment in the Islamic conservative AKP – belated though it was – and the right-wing nationalist MHP’s enthusiastic endorsement means that Soylu can legitimately lay claim to all three ideological traditions of which the right in Turkey is composed. That makes him a strong pretender not only to the leadership of the right, but also of Turkey.

Gonca Tokyol is a former senior editor at the Turkish news site t24 and a freelance journalist.

More in this category: « Turkey Advances in Africa against Franco-Emirati-Egyptian Entente COVID-19 and the Turkish Economy: Erdoğan Faces His Toughest Challenge »
back to top