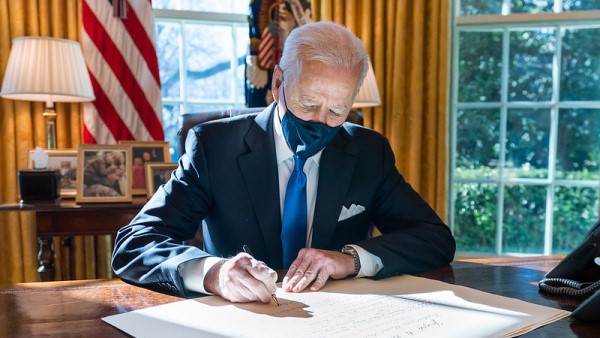 BACKGROUND: In a historic statement on Armenian Remembrance Day, April 24, President Joe Biden became the first U.S. president to recognize the mass killings of Ottoman Armenians during the First World War as genocide. Biden honored “all those who died in the Ottoman-era Armenian genocide”, and stated that “we recommit ourselves to preventing such an atrocity from ever again occurring.”

President Biden’s statement was angrily denounced by Turkish nationalists. Devlet Bahçeli, the leader of the far right Nationalist Movement Party (MHP), the partner of President Recep Tayyip Erdoğan, claimed that the statement had “blown up the bridges of dialogue between Turkey and the United States.” Bahçeli said that “Turkish-American relations are at a crossroads,” and predicted that “nothing is likely going to be the same after this.” Bahçeli urged the government to retaliate against the U.S. – “a country that is supposedly our ally” – by activating the Russian S-400 missiles that Turkey is keeping stored away.

The leader of the MHP, a party whose cadres hold commanding positions in the state bureaucracy, also asked that Turkey recollects its US$ 1.25 billion contribution to the F-35 project from which it was evicted by the United States as punishment for its purchase of the Russian missiles, which the U.S. demands Turkey rids itself of.

In contrast, President Erdoğan, although complaining that President Biden had used “unfounded and unjust” expressions that had “saddened” him, was soothing in his comments, and said that he is looking forward to turning a new page with Biden. Since Biden’s election last November, Erdoğan has signaled his eagerness to accommodate the United States. Speaking by phone on April 23, the day before the White House released President Biden’s Armenian genocide statement, Biden and Erdoğan agreed to meet separately during the upcoming NATO summit in Brussels on June 14. U.S. Secretary of State Antony Blinken confirmed that Biden and Erdoğan had had a “very good phone talk,” suggesting that Erdoğan’s hope that a new era can be opened with the United States may not be unfounded. It may be that having recognized the Armenian genocide – which his predecessors had abstained from lest it would alienate what was seen as a crucial ally – and thus having underscored that he doesn’t coddle Erdoğan, President Biden could have more freedom to re-engage with the Turkish leader.

While his ally Devlet Bahçeli calls for the activation of the Russian S400 missiles, Erdoğan is reportedly exploring the possibility of transferring them out of Turkey, to the Nakhichevan autonomous region of Azerbaijan, Turkey’s brother country, in what would be a face-saving operation. Yet for all his anti-American rhetoric, even the far-right Bahçeli would not seriously counsel a break with the United States. Such a move would strengthen the left-leaning, Eurasian nationalists in the state who advocate an alliance with Russia (and China) that the far right nationalists hold to be Turkey’s main antagonists.

IMPLICATIONS:  Even though it remains a vital interest for Turkey to maintain the Turkish-American relations in as good health as possible, the MHP’s reaction to President Biden’s move nonetheless attests to a deep frustration with and alienation from the U.S., which will have internal repercussions. While forced to toe the American line within the NATO framework, nothing prevents the Turkish state from moving against the “internal enemy.” Indeed, President Biden’s recognition of the Armenian genocide has incited the MHP leader to step up his pressure for the closure of the pro-Kurdish Peoples’ Democratic Party (HDP).

For the ultra-nationalists, Joe Biden’s statement underscores that they cannot reasonably expect Washington to accommodate Turkish state nationalism, something that would require withdrawing American support from the Kurds in Syria. Indeed, the Syrian Kurds’ affiliation with the Kurdistan Workers’ Party, (PKK) which has been waging an insurgency against Ankara since 1984, has made them Turkey’s main security concern. From the perspective of the far right – as well as the leftist, Eurasian nationalists in the state – this makes it all the more urgent to permanently disable the Kurdish political movement in Turkey.

After the pro-Kurdish HDP called on Turkey to heed Biden’s statement and recognize the Armenian genocide, Bahçeli said that it is unacceptable that the party remains in the Turkish Grand National Assembly, reminding that it was the parliament that led the struggle for Turkish independence between 1920 and 1923. He was joined in his call for the closure of the HDP by Doğu Perinçek, the leader of the left-wing nationalist Patriotic Party. Although electorally miniscule, the Patriotic Party represents the Eurasian nationalist wing of the Turkish state. Singling out the HDP as “Biden’s most important representative in Turkey,” Perinçek called for its closure as part of Turkey’s “defensive measures” against an America that he alleged “threatens our fatherland.”

This is an echo of the Cold War era in Turkey, when the supporters of the left – from social democrats to communists – were treated as traitors in the service of a hostile foreign power, a role that was then ascribed to the Soviet Union. The MHP, which was founded during this period, was assigned the role of physically eliminating left-wing supporters. However, the party was not allowed to take power, and to his own great surprise, MHP leader Alparslan Türkeş was incarcerated when the military took power in a coup 1980. Being closely allied with the United States, and as a member of both NATO and European institutions, Turkey could not be ruled by the far right. Now, this dynamic has changed.

As was the case during the Cold War, the perception of being the target of the schemes of a hostile foreign power relying on internal allies feeds extremism in the Turkish state. But today there are no checks on right-wing extremism. During the Cold War, the United States and the Turkish state shared an enemy – the left – and the far-right response to the challenge posed by the left was ultimately mitigated in the interest of Turkey’s standing in the Western alliance. Unlike the situation then, the Turkish state’s main enemy today – the Kurdish movement – is a friend of the United States.  Although Turkey cannot afford a break with the United States, there is little incentive to hold back ultra-nationalism. On the contrary, American support for the Kurds in Syria has made it all the more urgent to step up the repression against what is seen as the domestic ally of a hostile United States.

However, Biden’s recognition of the Armenian genocide could also subvert Turkish ultra-nationalism, as Turkey’s reaction to it has revealed the hollowness of its power pretentions. Erdoğan’s response to Biden attests to Turkey’s dependence on the United States, and stands in sharp contrast to his trademark rhetoric of national grandeur.

Meral Akşener, the leader of the conservative-nationalist opposition Good Party, commented that she had expected that Turkey would at least have closed the İncirlik air base and the Kürecik radar installation for the U.S., and remarked that Erdoğan’s “new Turkey” has been revealed to be a “defeated Turkey.”  In fact, his neo-Ottoman rhetoric and aspirations notwithstanding, Erdoğan has – as Akşener pointed out – never defied the United States in the way that social democratic Prime Minister Bülent Ecevit did when he ordered the invasion of Cyprus in 1974 against the expressed wish of the United States.

CONCLUSIONS: In his conciliatory response to Biden, Erdoğan said that Turkey is “tired” of being pressured. Clearly, Erdoğan is tired of being treated with hostility by the United States. Erdoğan never intentionally sought to antagonize the U. S., but neither did he appreciate the impact many of his actions were going to have in Washington. He now hopes that a new page can be turned with the United States.

For the ultra-nationalists in the Turkish state, however, Biden’s recognition of the Armenian genocide underscores that they cannot expect that Washington is going to accommodate Turkish state nationalism. A closure of the pro-Kurdish HDP may now be more likely. The Turkish state is incited to move against the “internal enemy,” all the more so when the practical reality dictates that it accommodates the “external enemy.” Yet the realization that the emperor is naked could ultimately prove more consequential.

Even though it is likely going to boost ultra-nationalism and feed extremism in the Turkish state in the short term, President Joe Biden’s move could contribute to subverting Turkish ultra-nationalism in the longer term, as Turkey’s response to Biden reveals the hollowness of its power pretentions.

The ruling Turkish state coalition has reason to worry that the rhetoric of national grandeur will prove less effective in mobilizing popular support in the future.

Halil Karaveli is Senior Fellow with the Central Asia-Caucasus Institute & Silk Road Studies Program Joint Center, and Editor of the Turkey Analyst. He is the author of Why Turkey is Authoritarian: From Atatürk to Erdoğan (Pluto Press).

More in this category: « Turkey's Rise as an Inter-regional Power Requires Rapprochement with Egypt Peker, Politics and the Turkish Mafia: Plus Ça Change? »
back to top