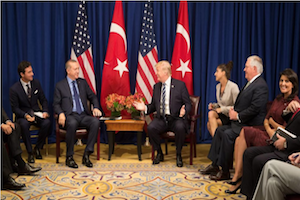 BACKGROUND: Recent months have seen a distinct intensification in Washington’s frustration with Turkey, and President Recep Tayyip Erdoğan in particular. Increasingly, in both the United States Congress and Executive Branch, previous efforts to assuage Erdoğan’s anti-American anger are increasingly being seen as a form of appeasement. The recent decision to dramatically curtail visa processing for Turkish citizens was just one manifestation of a corresponding desire to “get tough” with Erdoğan. As frustrations show no signs of dissipating, more such efforts seem entirely likely.

Harder to predict, however, is the likely impact of intensified U.S. pressure on Ankara.  Some optimistically imagine that American pressure could help curb Erdoğan’s most dangerous instincts, limiting the scope of his domestic abuses and preventing Turkey’s Kurdish conflict from escalating. This would not necessarily bring democracy back to Turkey overnight, but could at least help to assure that Turkey ultimately emerges relatively intact from a prolonged period of authoritarian rule. More pessimistically, others worry that additional American pressure only exacerbates Erdoğan’s paranoia and the anti-Americanism of his base, leading to a complete breakdown in diplomatic and economic relations.

There are certainly reasons to think that U.S. pressure could work as its advocates hope. In recent months, for example, a number of observers have cited Russian President Vladimir Putin’s success in dealing with Erdoğan through a policy of nothing but sticks as potentially instructive. Yet in trying to draw lessons from Russia’s experience, one difference stands out. While he undoubtedly sees Moscow as fundamentally hostile to Turkey in geopolitical terms, Erdoğan has no reason to think that Putin is working against him personally. With Washington, by contrast, matters are complicated by what appears to be the Turkish president’s genuine belief that the United States is seeking to depose him. This belief raises the stakes of any seeming concessions to the United States for Erdoğan, as well as for all those who share, or are compelled to defer to, his embattled worldview.

IMPLICATIONS: The risk, then, is that President Erdoğan’s paranoid view of American intentions could prevent Ankara from responding rationally to the pressures of the United States. In imagining how, it is perhaps worth briefly suspending disbelief, if not logic, to view the past five years from Erdoğan’s perspective. Looked at in this light, it is easy to see how, at a series of crucial points circumstances conspired to make it appear that those who pushed Erdoğan to take the reasonable or conciliatory course of action were actually working to undermine him. As a result, even if many loyalists of the Justice and Development Party (AKP) are worried about Erdoğan’s confrontational approach to the United States (and to Europe), the risk is that those who express such concern will only give Erdoğan more reason to doubt them.

In retrospect, it seems like distinctly bad luck that the Gezi park protests in 2013 inspired such a dramatic shift in Western media treatment of Erdoğan right at the same time as the power struggle between Erdoğan and Fethullah Gülen was breaking out into open. Furthermore, when Gülen publicly criticized the AKP government’s response to the protests, he not only echoed a sentiment expressed by many in the West but also by Erdoğan’s intra-AKP rivals like Abdullah Gül and Bülent Arınç. For Erdoğan loyalists, of course, this alignment of interests and rhetoric appeared too sinister to be a coincidence. Many concluded that Gülen was central to the change in Western opinion, while also becoming increasingly suspicious of their erstwhile allies in the AKP.

Similarly, the links between the corruption allegations against Erdogan’s entourage and family that appeared to be instigated by the Gülen movement in December 2013, and the U.S. government’s prosecution of Reza Zarrab, which the Turkish government has now gone into overdrive trying to highlight, provide another key moment at which reality offered an accidental assist to Erdoğan’s paranoia. And as with the Gezi protests Erdoğan’s suspicion was also directed at other AKP members who did not loyally close ranks behind him. Instead, some subsequently appeared open to using the corruption allegations to advance their own position at Erdoğan’s expense—something that would have been bad enough even without the fear of Western collusion.

The fallout from the subsequent revelation that the Turkish National Intelligence Agency (MİT) was transporting arms and ammunition to the Islamist rebels in Syria – also seems to have played a real role in confirming Erdoğan’s fears about the breadth of the alliance against him. However opportunistic the collaboration might appear to an outside observer, the very fact that Gülenist police – that intercepted the MIT transport – seemingly coordinated with a journalist who is known to be a Kemalist to advance the same narrative about Ankara’s support for Islamists that was also being promoted by the Kurdish political movement must have seemed distinctly ominous to AKP loyalists. Indeed, the 2014 truck raid quickly became a central piece of evidence that Gülenists, secularists and Kurdish nationalists all used when trying to convince Western audiences of Erdoğan’s links to ISIS. That this narrative got more traction than the evidence seems to justify can only have confirmed Erdoğan’s conviction—in time a self-fulfilling prophecy—that all his diverse enemies were working together to bring him down.

Finally, the connection between the Kurdish conflict and the July 15, 2016, coup attempt seems like another possibly overlooked point on which Erdoğan found justification, however contradictory, for his suspicions. Before Turkey’s war with the Kurdistan Workers’ Party (PKK) resumed in the summer of 2015, Erdoğan faced nationalist anger over the supposed concessions he was making to the PKK as part of the peace process with the Kurdish militants. This anger was reflected in public debates, but also, crucially, within deeply nationalist circles in the Turkish military. After fighting resumed, however, Erdoğan then faced considerable criticism not only from the West and liberals in Turkey, but also from the Ahmet Davutoğlu wing of his own party. Even in pro-government newspapers like Yeni Şafak, pro-AKP columnists were quietly urging Erdoğan to return to the peace process throughout the summer of 2015. By ignoring this advice, Erdoğan secured a renewed electoral mandate in November 2015, forestalling, as he saw it, the risk of then AKP leader Davutoğlu entering into a coalition with the CHP and possibly reviving the 2013 corruption allegations. But after the 2016 coup attempt, it must have also crossed Erdoğan’s mind that, had he followed the advice of the moderates in his party and continued the peace process, he might have faced a more successful mutiny with the active participation of more nationalist officers. Indeed, the AKP government’s constant insistence that the coup attempt was a purely Gülenist affair would seem to reflect a deeper fear of how differently things could have gone if it had gained wider support.

After doubling down on his alliance with the nationalist and anti-Western constituency that ultimately stayed loyal to him during the coup, Erdoğan may now see himself as facing an intensified version of the dilemma he faced in 2015. With more sober-minded advisors warning him of the potential economic or geopolitical consequences of continuing to antagonize the West, Erdoğan must wonder whether following their advice risks leaving him dangerously vulnerable on his nationalist flank. If Erdoğan believes that American diplomatic pressure and support for the Kurdish YPG militia in Syria were both being used – perhaps in coordination with his domestic rivals – to squeeze him in exactly this way, he would have reason to conclude that his only option is to resist on both fronts.

Moreover, while much analysis has emphasized the tactical nature of Erdoğan’s nationalist turn, the risk for Turkey’s Western allies is that even if Erdoğan ultimately abandons his nationalist allies, at a deeper level the events of the last five years have helped vindicate their worldview in his mind. Erdoğan need not like or trust the most outspoken voices from the Nationalist Action Party (MHP) or from the smaller Fatherland Party (Vatan Partisi) to nonetheless conclude that they were ultimately right about Gülen, right about the Kurds and right about the United States – while more moderate voices within his own party proved dangerously naïve.

CONCLUSIONS: The irony is that if Erdoğan truly believes the United States is trying to weaken or topple him, he misunderstands the nature of Washington’s cynicism. Like many authoritarian leaders before him, Erdoğan will benefit from the fact that as frustrated as Washington becomes with his policies, preserving Turkey’s stability will remain America’s overriding interest. Erdoğan has now consolidated power to the point where his forced departure is more likely to unleash chaos than a smooth transition back to democracy – a point that only became clearer in the course of last year’s coup attempt.

This creates a natural ceiling to U.S. pressure on Ankara. The possibility of using various economic sanctions has generated increasing interest in Washington over recent months. But with the Turkish economy already at risk of a serious crisis, the kind of sanctions that could have a real impact on Turkey’s economy, and by extension Erdoğan’s popularity, would also appear incredibly risky to U.S. policymakers. Indeed, even were such measures implemented, the moment they led to widespread social unrest could well be the moment Washington began to worry about their impact.

What the events of recent months suggest is that the growing impetus to take action against Erdoğan in Washington is driven by actions like the Sheridan Circle scuffle or the arrest of State Department employees that are interpreted as direct affronts to the United States. Rather than seeking to change Erdoğan’s domestic behavior, increased U.S. pressure, economic or otherwise, is likely to be more narrowly focused on preventing similar provocations on Ankara’s part in the future. To the extent U.S. actions are presented in this way – and, despite Erdoğan’s paranoia, understood accordingly – U.S.-Turkish relations might ultimately reach a tense, somewhat dysfunctional equilibrium that maintains the most crucial forms of cooperation even amidst continuing recriminations.

Nicholas Danforth is a senior policy analyst for the national security program of the Bipartisan Policy Center, Washington, D.C.

More in this category: « An Uncertain Future for the Turkish Armed Forces New Turkey: Neo-nationalist or the reincarnation of the "Old"? »
back to top