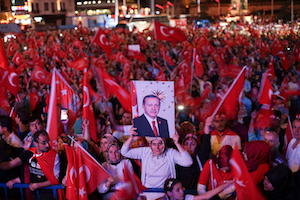 BACKGROUND: On January 14, 2018, the left-wing Turkish news portal Artı TV broadcast CCTV footage from one of the police surveillance cameras on the Bosporus Bridge in Istanbul on the morning of July 16, 2016. On the previous evening, a unit of military cadets had been ordered by their commanders to deploy to the bridge on the pretext that they were participating in an exercise – only to discover after they had arrived there that they had been deceived and were being used as part of an apparent putsch. The cadets spent the night stranded on the bridge, their routes of escape blocked by elements of the Turkish police – who, like the overwhelming majority of the Turkish military, had remained loyal to the government – and thousands of government supporters, who had been called onto the streets by President Recep Tayyip Erdoğan.

By dawn on July 16, it was clear the putsch had failed. Shortly before 6.30 a.m., the unit on the Bosporus Bridge seems to have decided to surrender. The CCTV footage shows them removing all of their weapons and equipment, including their helmets and combat vests, and walking away towards the center of the bridge, where they squatted in a huddle and waited to be taken into custody. Instead, as they cowered on the ground, they were attacked with staves and clubs by a mob of government supporters, who appear to have been emboldened by the fact that the cadets were defenceless. While the police made only desultory efforts to stop them, the CCTV footage shows the mob beating at least two of the cadets to death.

Since the declaration of the State of Emergency that was introduced in the wake of the failed coup, Erdoğan has effectively governed the country by decree rather than promulgating laws through parliament. Nevertheless, on November 8, 2016, parliament approved Law No. 6755, which introduced some amendments to the legislation that regulates the State of Emergency. Article 37 of the law provides state employees with exemption from any “legal, administrative, financial or punitive responsibility” for actions, decisions and measures taken “to suppress the coup attempt and terrorist incidents of July 15, 2016 and incidents which bear the characteristics of a continuation of the aforementioned.”

Article 37 was problematic in itself, not least because it raised the question of why Erdoğan and the other members of the government considered it necessary to provide state employees – such as members of the security forces – with immunity from prosecution for their actions in response to the failed putsch, but not for their actions in response to other terrorist incidents. Even more problematic was the lack of a timeframe for what constituted a “continuation” of the “coup attempt and terrorist incidents”. It would not have been difficult to include a provision in the law limiting any immunity to July 15-16, 2016. This was not done. This omission becomes particularly disturbing given the frequency with which Erdoğan and other government officials have characterized almost every policy setback, protest or criticism of the regime since July 2016 as being a continuation of the coup attempt by other means.

On December 24, 2017, Decree No. 696 was published in the Turkish Official Gazette. Article 121 of the decree broadened the exemption provided by Article 37 of Law No. 6755 to grant immunity to anyone involved in the suppression of “the coup attempt and terrorist incidents of July 15, 2016 and incidents which bear the characteristics of a continuation of the aforementioned” regardless of “whether or not they bear an official title and whether or not they were engaged in the fulfilment of their official duties.” Again, no attempt was made to set temporal parameters or to clarify what was meant by “continuation”. As a result, and given the government’s definition of what constitutes a “continuation” of the July 2016 putsch, the decree effectively provides not just the security forces but also the government’s supporters – such as the mob who lynched the cadets on the Bosporus Bridge – with complete judicial immunity from prosecution for murdering or maiming any critic, opponent or rival of the government.

Not surprisingly, the decree provoked an outcry, with even Abdullah Gül – the usually risk averse former president – publicly voicing his disquiet at what he described as its “vague” wording. These concerns were dismissed by government officials, who maintained that the immunity only applied to July 15-16, 2016. But they failed to explain why this had not been stated in the law or the subsequent decree. On December 31, 2017, Prime Minister Binali Yıldırım went one step further and publicly threatened those who had questioned the decree, declaring: “We promulgated a law to protect our heroic citizens. As far as we are concerned, whoever objects to this is no different from the putschists. I say this openly.”

IMPLICATIONS: Mobs of armed pro-government vigilantes first began to appear in 2013 during what became known as the Gezi Park Protests, when they attacked anti-Erdoğan demonstrators with clubs and knives – albeit without causing any fatalities. It was also during the Gezi Park Protests that Erdoğan himself changed strategy, abandoning his previous attempts to broaden his popular support in favor of trying to deepen it by inculcating a sense of siege amongst his supporters, in which each of a growing catalogue of setbacks and failures were attributed to Western conspiracies, of which his domestic critics and opponents were a treacherously willing part.

Over the next three years, the two became increasingly intertwined and religionized. In Erdoğan’s self-aggrandizing and apparently sincerely believed narrative, it became not only himself and the country that was under constant assault from scheming Westerners but – through his claim to Turkey’s and his own leadership of the Muslim world – Islam as well. Even before he called them onto the streets on the night of July 15-16, 2016, Erdoğan had already repeatedly encouraged his supporters to see themselves as having a sacred duty to enforce “national values” and to actively combat both foreign machinations and the perceived domestic enemies in their midst. The regime has used its control over the Turkish media not just to stifle dissent but to stoke xenophobia and deepen social divisions. Much of what appears in the pro-government media has long been a mixture of lies, distortions and delusions – but the hatred and fear that they have instilled remain poisonously real. Most perniciously, in the minds of Erdoğan’s hard-core loyalists, they are not the aggressors. They are themselves under attack.

The result has been a succession of incidents in which mobs of pro-Erdoğan vigilantes have suddenly appeared on the streets to try to confront or silence his perceived critics and opponents. Before the failed putsch, the nucleus of each mob seems to have been formed from members of already established networks, such as local branches of the Justice and Development Party (AKP) – as in the attack on Hürriyet newspaper in September 2015 – or pro-Erdoğan NGOs, such as the Osmanlı Ocakları, or “Ottoman Hearths” organization, which was founded in 2009. But the mobs appear to have been formed by members spontaneously networking with each other rather than responding to directives from the leadership of the organization concerned. However, since July 2016, NGOs have also been formed with the explicit purpose of coordinating popular resistance to any attempt to remove Erdoğan from power. The most notorious is the Halk Özel Harekatı (HÖH), or “People’s Special Operations”, which currently has branches in 22 of Turkey’s 81 provinces and whose name has been to chosen to echo that of the Polis Özel Harekatı (PÖH), the heavily-armed tactical unit of the Turkish National Police which is used in counter-terrorism combat operations in urban areas.

Over the last 18 months, there has also been a sharp rise in the number of reports that Erdoğan loyalists have been stockpiling weapons. The promulgation of Decree No. 696 coincided with the appearance of photographs – some of which have been posted on the internet – apparently showing regime supporters undergoing military training at camps in rural Anatolia. The authenticity and the dates of the photographs are currently unclear. However, both on social media and in private conversations, it is now commonplace for regime supporters to affirm their readiness in the future to use weapons against their enemies. As a result, even if it is not being coordinated by a specific organization or institution, it would be a surprise if they were not making preparations to be able to do so.

There has been considerable speculation about the activities of Sadat A.Ş, which was officially established in 2012 by Brigadier General (ret.) Adnan Tanrıverdi and describes itself as a private company providing “defense consulting” services. In reality, its promotional materials make no secret of its ideological agenda and it has formed close ties with the Erdoğan regime. In August 2016, Tanrıverdi was even appointed as Erdoğan’s Chief Advisor on security.

Sadat is known to have provided military training to Muslim Brotherhood affiliates in a number of countries in the Middle East – and to some of the rebel groups fighting in the Syrian Civil War. Its activities inside Turkey remain disturbingly opaque. There has been speculation that it played a role in the shadowy paramilitary units that appeared – without insignia and equipped with non-standard weapons – in southeast Turkey during the urban clashes with the Kurdistan Workers’ Party (PKK) in 2015-2016. There have also been claims that Sadat helped to coordinate and arm the civilian resistance to the July 2016 attempted coup. No firm evidence has yet been produced to support any of the allegations – and the members of the mob which lynched the cadets on the Bosporus Bridge appear to have been motivated by bloodlust rather than responding to orders. But, when combined with the disappearance of any vestiges of confidence in the rule of law in Turkey, such claims and rumors have undoubtedly played a role in deepening the state of fear in which many of the regime’s critics and opponents now live.

CONCLUSIONS: Turkey is no stranger to conspiracy theories. What is new is the extent to which they now underpin the regime’s grip on power. This would be unhealthy in itself. But, when added to its supporters’ now widespread sense of empowerment and immunity, the regime’s weaponization of fear and paranoia against its domestic opponents risks the already severe social tensions erupting into mass violence – and violence which, when compared with the regime’s deployment of the state security forces, would be much more difficult to control.

Nor does the regime appear to be aware that, unless it moves quickly to try to restore confidence in the rule of law and convince its opponents that they will be protected by the organs of the state, there will come a point when – in order to avoid meeting the same fate as the conscripts who were lynched on the Bosporus Bridge – some of them will begin to organize and arm themselves.

Picture credit: By Mstyslav Chernov (Own work), via Wikimedia Commons accessed on January 22, 2018

More in this category: « New Turkey: Neo-nationalist or the reincarnation of the "Old"? A "Eurasian Turn" in Turkish Foreign Policy? Not Likely »
back to top