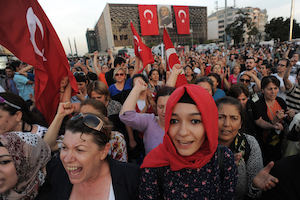 BACKGROUND: The upcoming municipal elections in Turkey on March 31 will be a major test for the governing Justice and Development Party (AKP) and its ally, the Nationalist Movement Party (MHP). This is the first time since the AKP came to  power in2002 that the economic conditions are unfavorable for the governing party. Indeed, the AKP may be headed toward what will prove to be a historic defeat.

Turkey’s economic crisis is worsening by the day. Unemployment has reached record levels, with thirteen percent officially unemployed, and with the real percentage in fact near an all-time high twenty percent. Inflation continues to rise, and industrial production has plummeted. The construction sector – the engine of the Turkish economy – is almost at a stand-still.  With foreign investment staying clear of Turkey, and indeed with capital leaving the country, there is little hope that the economic crisis will be overcome in the near future.

It is also becoming clear that the measures that have so far been enacted by the Turkish government to mitigate the crisis are not having the desired effect, and that blaming the crisis on some supposed foreign conspiracy – as the Turkish leadership has been in the habit of doing – will no longer shield President Recep Tayyip Erdoğan’s party from the growing dissatisfaction, if not anger of the voters.

Opinion polls indicate that a significant drop in the AKP’s votes can be expected on Sunday. In last year’s election to parliament, the AKP garnered forty-two percent of the votes. Since then, the party relies on the support of its partner, the MHP, to secure a majority in the parliament. Even though the MHP has not entered the government, it wields significant power over government policies and its hard-line views on the Kurdish question and in matters of national security have notably been adopted by the government. While the MHP is expected to retain its support of around eleven percent, and maybe even increase it, some polls suggest that the AKP votes may drop to around thirty-five percent, a record low.

Yet while it is obvious that the AKP’s almost seventeen year long “honeymoon” with the Turkish electorate is now definitely over, its control over the media still gives it an edge over the opposition parties that are put in a disadvantaged position to say the least. As in recent elections, twenty-five national television networks broadcast President Erdoğan’s rallies live, while giving no coverage at all to the rallies of the opposition leaders who can only count on biased, negative “reporting.” The opposition is attempting to compensate for this with activity on social media. Yet the AKP is mobilizing what has so far been the most effective propaganda machine in Turkish politics ever, and the “People Alliance” of the AKP and the MHP is hoping to deflect voters’ attention from the growing economic troubles they face in their everyday life with a bombastic rhetoric that conjures the existence of a supposed, “existential” threat to the nation and the state.

According to this heated rhetoric, Turkey faces the threat of the emergence of a “terrorist” cordon in northern Syria that is controlled by the Kurdistan Workers’ Party (PKK); even though this is not openly stated, it is nonetheless implied that the United States and Israel are responsible for empowering a Kurdish terrorist threat against Turkey. And in some cases, the anti-PKK rhetoric of the AKP and MHP has also tended to veer toward expressions of ethnic animosity including outright insults to Kurds, which risks provoking a desertion of the Kurdish vote from the AKP.

Meanwhile, the ruling People Alliance has accused the opposition “Nation Alliance” – which is composed of the centrist Republican People’s Party (CHP) and the right-wing Good Party – of colluding with the PKK, after the pro-Kurdish Peoples’ Democratic Party (HDP) declared that it was not going to field candidates in those parts of the country where it is weak, and would instead recommend voting for the candidates of the Nation Alliance in those places. There are no signs that this accusation is being taken seriously by voters in general, and it seems unlikely that the recourse to conjuring a supposed, existential threat to Turkey will consolidate the nationalist-conservative base this time.

The opposition parties’ main campaign theme is, unsurprisingly, the economic crisis; their hope is that the failure of the government to cope with it will benefit them, and the surveys do suggest that this is going to be the case. According to the surveys, the contest is going to be extremely tight in both Ankara and Istanbul, where the opposition candidates stand a realistic chance of winning.

IMPLICATIONS: The symbolic importance of the AKP losing the capital and the biggest city of the country could hardly be overstated. Istanbul has been ruled by Islamists, first of the Welfare Party and then of the AKP, since Erdoğan was elected mayor twenty-five years ago. The CHP candidate in Istanbul, Ekrem İmamoğlu, who was until recently unknown to the general public, has succeeded in reaching out to diverse constituencies, including to the Kurds, who are critically important for the outcome of any election in Istanbul, with a moderate language.

The CHP candidate in Ankara, Mansur Yavaş, is a nationalist former politician of the MHP, who is therefore a natural choice for the MHP base. Indeed, Kemal Kılıçdaroğlu, the CHP leader, has spared no effort in his attempts to court the right-wing nationalist base, even greeting audiences with the characteristic “wolf sign” of the Turkish ultra-right.

If, as it seems, the municipal elections result in a major setback for the AKP, the outcome will have repercussions far beyond municipal politics. In the not unlikely event that the votes of the governing party drop to the vicinity of thirty-five percent, new political developments, indeed convulsions, will be triggered.

To start with, the outcome of the elections may deepen the economic crisis; this in turn, will force Erdoğan to moderate his anti-Western rhetoric and to reset relations with the United States; ultimately, it will be difficult for Turkey to keep juggling the U.S. and Russia. And even though this would be a blow to his charisma, and even though he will try his utmost to avoid swallowing this bitter pill, Erdoğan may eventually find himself forced to authorize an appeal to the International Monetary Fund (IMF) for the negotiation of a rescue program – with its inevitable share of austerity measures.

But no matter how big the losses of the AKP, Erdoğan is not going to take the risk of calling an early presidential election; he is likely to cling to his office until the end of his term. Nonetheless, Erdoğan’s fate is going to be in the hands of his partner Devlet Bahçeli, the MHP leader, who once again could decide to upend the rules of the political game, as he hid in 2016 when he proposed that Turkey switch to the presidential system. Bahçeli has already intimated that the presidential system will be subject to reconsideration if the total vote of the AKP-MHP alliance drops below fifty two percent, the percentage with which Erdoğan was reelected in 2018.

Bahçeli’s move 2016 to propose a presidential system came as a response to the results of the general election in June 2015, when the pro-Kurdish HDP entered parliament as the third biggest party – which shocked the state establishment, in which MHP cadres are strongly represented – and aimed at ensuring that the Kurdish political influence was neutralized, by making the legislative branch of the government more or less irrelevant. But the upcoming municipal elections are going to demonstrate that the system that was premised on excluding the Kurds from the political dynamics of the country – by concentrating power in the presidency – fails to ensure that the Kurds are bypassed: the pro-Kurdish HDP will once again carry most of the east and southeast, while the Kurdish vote will be decisive in several cities and provinces in the west of Turkey. The results of the election will thus be a reminder that there is no military solution to the Kurdish question, and that a political dialogue must be engaged.

CONCLUSIONS:  There is every reason to expect that the municipal elections on March 31 will be a major setback for the ruling AKP and that they will set in motion developments that are going to alter Turkey’s political landscape. The results are likely to further deepen the already visible divisions within Islamic conservative ranks and embolden the dissenters such as Abdullah Gül, Ahmet Davutoğlu and Ali Babacan, who are known to be preparing to start a new party. Meanwhile, another grouping around the former center-right minister Rıfat Serdaroğlu is waiting for the election results to launch a party.

The March 31 elections could lead to consequential political changes that will affect the nature of Turkish regime, its Kurdish policies as well as Turkey’s relations to the West.

More in this category: « The Kurdish "Other" and the American Enemy Ensure the Cohesion of Turkey's Nationalist Regime The Deeper Dynamics of the Istanbul Rerun »
back to top