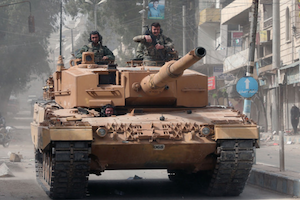 BACKGROUND:  In a hastily convened Moscow meeting on March 5, 2020, Turkish President Recep Tayyip Erdoğan and Russian President Vladimir Putin signed a new accord to halt the rapidly escalating military conflagration between Turkey and Russia in Syria's Idlib province. Officially an addendum to their September 17, 2018 Sochi agreement, the updated ceasefire terms of the "Additional Protocol" are tantamount to a new accord under which Turkey acceded to the Syrian government's territorial advances in Idlib province gained at Turkey's expense.

The Turkey-Russia flare-up in Idlib had been over a year in the making as the strategic divergence between Ankara and Moscow widened with Ankara's ongoing failure to deliver on its promise to eliminate the Sunni militant coalition Hayat Tahrir al-Sham (HTS) from the parts of Idlib under the Turkish military's supervision. Led by Syria's former Al-Qaeda affiliate Jabhat al-Nusra, HTS has put up some of the most formidable resistance to Assad government's effort to reassert its control over all of Syria's territory.

Under the terms of the 2018 Sochi agreement, Russia acquiesced to the creation of a jointly monitored, demilitarized zone with Turkey in Idlib. Established along the semi-circular contact line between Syrian government forces and rebel forces, the zone consisted of an inner ring of twelve Turkish military observation posts paralleled by an outer ring of Russian military observation posts separating the warring sides.  Preserving Turkey's control of a large swath of Idlib, the Sochi agreement prevented Syrian and Russian air force attacks on Turkish troops and their allied National Liberation Front (NLF) forces on the condition that the NLF under Turkey's supervision would dislodge HTS from the province.

However, with Turkey shifting its resources to capture territory in northern Syria to dismantle the semi-autonomous regions established by PKK-affiliated Syrian Kurdish forces, the NLF ceded administrative control of all its positions to HTS on January 10, 2019, allowing HTS to secure its hold on northern Idlib. On January 18, Russian Foreign Minister Sergey Lavrov expressed the Kremlin's consternation, “It also worries us that in Idlib, contrary to the agreements on creating the demilitarized zone there, Jabhat al-Nusra dominates and violates the demilitarized zone. About 70 percent of this territory is already occupied by terrorists; they are trying to attack the Syrian army’s positions, settlements and they are trying to threaten our military air base in Hmeymim.”

As 2019 progressed, Russia exploited Turkey's failure to deliver on its Sochi agreement commitment as pretext to provide increasing Russian air support for Syrian President Bashar al-Assad's village-by-village campaign to retake territory in Idlib province. The effort culminated in the Dawn of Idlib 2 offensive launched on December 19, 2019 by the Syrian Arab Army (SAA) and its allied forces, including Hezbollah and Iranian-backed Shiite militias.

IMPLICATIONS:  The conflict fully erupted on February 27, 2020 when Turkey introduced a significant number of man-portable air-defense systems (MANPADS) into the Idlib theater, systems capable of downing Russian combat aircraft, in an attempt to neutralize Russian air dominance to roll back Turkey's losses. On February 27, Russian fighter jets in southern Idlib came under heavy fire from Turkish MANPADS while a combined MANPAD and UAV attack was concurrently conducted in the vicinity of Russia's Hmeimim air base.

Threatening the Syrian forces occupying formerly Turkish-held positions that “no heads will remain on their shoulders” and promising to exact retribution for the killed Turkish soldiers, Turkey' President Erdoğan launched Operation Spring Shield, Turkey's fourth military offensive in Syria in as many years.

Employing its domestically-produced KORAL land-based transportable electronic warfare system that can create ghost images on enemy radar, Turkey was able to inflict an impressive amount of damage to Syrian as well as Russian military assets using its Bayraktar TB2 and Anka combat drones. While the show of Turkey's drones destroying tanks and heavy artillery mollified Turkish public opinion's demand for an adequate response to Damascus and Moscow, Turkey's tactical success on the battlefield did not reverse the territorial gains made by the Syrian government.

With the Turkish military's ability to sustain its successful campaign swiftly diminishing, Ankara agreed to freeze the status quo, resulting in the Additional Protocol being signed by Erdoğan and Putin on March 5.

This 'Sochi 2.0' agreement established the M-4 highway as the new southern boundary in Idlib. Starting from the now Damascus-controlled city of Saraqib at the junction with M-5 highway, this segment of the M-4 highway runs westward across Idlib to Ain al-Hawr where it meets Damascus controlled Latakia.

Bisecting Turkish-controlled Idlib at the southern end, the agreement creates a territorial pocket south of the M-4 highway, situated between the highway and the southern contact line with SAA forces. The new boundary line effectively traps many Jihadi militant organizations within this southern pocket, leaving them to face Russian backed SAA forces.  However, this southern pocket will only be sealed through full control of the 80 km segment of the M-4 highway. Hence, the main term of Ankara and Moscow's agreement establishes a buffer zone extending 6 km deep on both sides of the highway and calls for joint Turkish-Russian patrols along the length of the highway starting on March 15, 2020.

Turkey's relationship with Russia is fundamentally transactional and should not be mistaken for a strategic partnership. In general, Turkey's  cooperation with Russia – such as Turkstream and Turkey's S-400 purchase – enables Ankara to maintain a certain level of autonomy in its relations with its NATO allies. In the immediate Syrian context, Ankara is willing to compartmentalize whatever losses it endured in Idlib in order to continue cooperating with Moscow to preserve Turkey's critical interests in northern Syria.

Turkey's priority is to secure Russia's assent to Turkey asserting its influence in Kobani and other Kurdish dominated regions along Turkey's southern border.  As part of this objective to supplant Kurdish autonomy with Turkish influence, Turkish construction projects in the region are essential. With its larger interests at stake, Ankara is unlikely to tolerate the Syrian opposition groups from de-railing its renewed cooperation with Moscow.

Three days into the ceasefire, Turkey had sent six armored convoys into Idlib to massively reinforce Turkish positions deploying 750 new military units. As of March 18, over 1,100 new Turkish military units are deployed in Idlib. The reinforcements serve a dual purpose: Turkey's ramped up military presence serves as a deterrent to discourage the Syrian government from pushing its Dawn of Idlib 2 operation, while it also it enhances Turkey's capability to cope with opposition jihadist organizations such as HTS, the Chechen-led Ajnad al-Kavkaz, and the Uyghur-led Islamic Party of Turkestan (ITP) over which Turkey does not exert a controlling influence. Jisr al-Shughour, a town strategically located on the M-4 corridor, is dominated by the ITP and other foreign jihadist organizations.  Ongoing attacks along the highway have revealed there is widening divergence of interests between several opposition groups and Turkey.

The initial Turkey-Russia joint patrol was intended to travel along the first quarter of the 80 km segment.  However, the patrol was met by civilian protestors who had erected formidable roadblocks with burning rubber tires. To avoid an incident, the patrol returned after completing only 2 km of its intended 20 km patrol. The area in which the protests occurred outside the village of Tronbeh is controlled by the NLF.  Reports have emerged that the NLF itself has rejected the Additional Protocol that Ankara signed with Moscow, with approximately half of the senior command resigning their positions.

The contact line between Turkey and Russian-backed Syrian forces is still volatile. Iranian-backed Shiite militias and Iranian-allied Lebanese Hezbollah that drove Turkish-allied forces from the western hinterland of Aleppo have now taken up positions around Saraqib, at the head of the M-4 corridor.  A sufficient provocation could reignite open clashes with Turkish-backed forces. Even if Turkey can enforce a fragile peace in Idlib, it will face the challenge of overseeing a region that now contains over 900,000 displaced persons, who could face a catastrophe if an outbreak of the Coronavirus pandemic occurs.

CONCLUSIONS:  Russia has publicly committed itself to support the Assad government’s effort to retake all of Syria's territory. Turkey’s best option is to slow the pace at which the SAA retakes territory in order to buy time to consolidate Turkey's influence over northern Syria. This requires continued cooperation with Moscow to secure Kremlin's consent for Turkey to be one of the leading actors in the reconstruction of northern Syria.

The SAA and Russian forces will move to drive jihadist elements from the newly defined southern pocket. Such groups will seek to draw Turkey into a new conflagration with Russia as a countermeasure. If hostilities break out again between Turkey and Russia, there is no obvious fallback line for a 'Sochi 3.0' agreement, making any future de-escalation between Turkey and Russia more difficult to attain.

Turkey's overriding interest to entrench its influence northern Syria compel Ankara to yield to Moscow and seek a new equilibrium somewhere between war and peace in Idlib. The degree to which Russia maintains this equilibrium will be the measure of how much Moscow is able and willing to accommodate Turkey's interests in northern Syria.

Dr. Michaël Tanchum is a senior associate fellow at the Austrian Institute for European and Security Studies (AIES), a fellow at the Truman Research Institute for the Advancement of Peace, the Hebrew University, Israel, and non-resident fellow at the Centre for Strategic Studies at Başkent University in Ankara, Turkey (Başkent-SAM). @michaeltanchum

More in this category: « Turkey's Dysfunctional Presidential System The Meaning and End of Turkey-Russia Cooperation in Syria »
back to top