BACKGROUND: The history of the Turkish republic that celebrated its 90th anniversary on October 29 has been marked by societal discord and political convulsions – three military coups, violence between the left and the right during the 1970s, a Kurdish insurrection since the mid-1980s and a culture war between secularists and religious conservatives during the last decade.

During the first years of the republic, sweeping cultural changes designed to make the new nation Western-looking were imposed. That has encouraged a reading of the history of the Turkish republic that puts the issue of secularism at its center and that posits a lasting antagonism – until the AKP took over the state – between a supposedly Westernizing state and a conservative population. That is a narrative that distorts history.

The Turkish state has indeed antagonized a substantial part of the population, but more by trying to impose a uniform, Turkish identity on it. But it has not challenged Sunni Islam, which on the contrary has been promoted as an integral part of the national identity. The cultural revolution of Kemal Atatürk died with him, if not earlier; the cultural revolutionary zeal of the first decade or so of the republic was replaced with an accommodation of Sunni Islam. The Turkish state has been not so much an agent of secularist change as of capitalist development.

Capitalism, not secularism, is the key word to understand the political journey of the Turkish republic. Capitalist development has shaped the nature of Turkish politics, unleashing class dynamics that have determined the political course of the country.

The state has played a decisive role as the promoter of capitalist development and as a vehicle of bourgeois class interests. Indeed, Turkish capitalism and the bourgeois class were the creations of the state; nationalist identity politics that endeavored to make Kurds and others into Turks represented yet another aspect of state-led capitalist development. National market and nation-state went hand in hand before globalization.

A new bourgeoisie was successfully nurtured during the one-party regime from 1923 to 1950. As among others Turkish sociologist Cağlar Keyder, author of the classic study State and Class in Turkey has noted, the spoliation of the resources of the non-Muslim bourgeoisie of the Ottoman Empire – and of their remnants in the republic – was of crucial importance: “As non-Muslims were eliminated and driven away, their property, as well as the positions they vacated became part of the dowry of the new state that could be distributed to the rest of the population. What this distribution achieved was both to expedite the creation of a native bourgeoisie and to make it beholden to the state.” 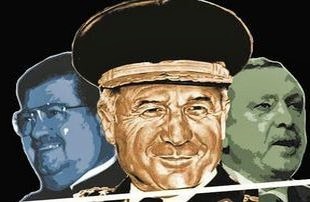 IMPLICATIONS: Turkey’s transition to a multiparty system in 1946-1950 reflected the growing clout of the bourgeoisie; notwithstanding the fact that the power of the new bourgeois class initially proved difficult to handle for some in the state elite (who harbored illusions of restoring the formerly uncontested power of the bureaucracy), the relationship of the state and the bourgeoisie was to remain defined by the interests of capitalist development. The military coup in 1960, which overthrew the party of the bourgeoisie, did not alter what have since remained the defining features of Turkish politics: the more or less continued rule of the parties of the bourgeoisie, with the state bureaucracy performing the role as the facilitator of capitalist development.

The intervening coup regimes of 1971-1973 and 1980-1983 did not represent any aberrations from the general pattern of Turkish politics: the military was called upon to step in only when the bourgeoisie was intimidated by the rise of the left, and needed help to restrict the political freedoms that had been granted in the constitution that was drafted after the 1960 coup. That first led to the coup in 1971; the constitution was amended, but the junta left the job unfinished. During the 1970s it also became apparent that the needs of a capitalist development that had run into crisis could not be met under democratic circumstances. The military staged the coup in 1980, which fundamentally rearranged Turkey’s politics and political economy, not to save “secularism” as the conventional narrative of Turkish republican history holds, but to save capitalism.

From the 1960s onward, the state bureaucracy had led a planned, import-substituting industrialization, which had nurtured the growth of an industrial bourgeoisie. But by the 1970s, the model of state-led capitalism that served the domestic market behind high walls of tariffs that shielded it from foreign competition had ran its course; in order to avoid suffocation, Turkish capitalism had to move up to the next stage, go global, and start to earn foreign currency by making exports. For this to happen, the economy had to be liberalized, state subsidies abolished, exports and foreign investment encouraged, and wages depressed. The inevitable social effects of this liberal shock therapy required that the forces of resistance – the trade unions and the radical as well as the social democratic left – were eliminated.

The military suppressed the left and launched a vast program of privatizations and deregulations without having to worry about strikes, labor unrest or protests. The leader of the 1980 coup, General Kenan Evren, who thirty three years later has been put on trial, was Turkey’s equivalent of Chile’s military dictator Augusto Pinochet who had launched a similar, neo-liberal transformation a few years earlier.

Although the military continued to meddle in politics after it handed over power to the bourgeois party that carried the first election after the coup, its function as the vehicle of the interests of the dominant class was effectively terminated.  It had performed its role as the enabler of liberalization; thereafter, Turkish capitalism took on a force of its own, which is what, in the final analysis, has neutered the political role of the military. Empowered by the integration with the global capitalist economy, the bourgeoisie no longer needs the assistance of the military to secure and advance its class interests.

Liberalization and globalization broadened the class basis of Turkish capitalism, by turning the small, rural bourgeoisie of shop-keepers and small-scale producers in Anatolia into an industrial bourgeoisie. Although there is an ideological difference between this religiously conservative bourgeoisie and the original, secular-oriented bourgeoisie that the republic had created, they nonetheless share common class interests. Indeed, together they brought the AKP to power.

The rule of the AKP does not represent any break with historical continuity; it is a bourgeois party in the tradition of the Democrat Party (DP) of the 1950s, the Justice Party (AP) that dominated the 1960s and 70s and the Motherland Party (ANAP) of the 1980s and 90s. Just like its predecessors, it has looked after the interests of the dominant class – and of international capital, on which Turkey has become highly dependent. It has continued with policies of privatization and deregulation.

But in another respect that could prove crucial, the AKP does represent a break with tradition: social and cultural conservatism and nationalism have always been part and parcel of bourgeois ideology in Turkey – while liberalism in a cultural and political sense has not taken hold – but the AKP has taken conservatism several steps further. That raises the question whether the party will remain the vehicle of capitalist interests – and thus retain political power. Capitalist development in Turkey has reached a point where it must advance to a higher stage to avoid stagnation and potentially even crisis, and conservatism does not offer a remedy, on the contrary.

Nationalism, the attempt to impose a uniform national identity, appeared to make sense when Turkish capitalism was national, confined to the national market, but it is anachronistic after the integration with the global capitalist system; the policies of the AKP demonstrate an awareness of this, but the party remains beholden to an equally anachronistic conservatism.

Turkey’s large current account deficit is a reminder that the current model of capitalist development has reached its limits: The Turkish economy is to an unhealthy extent – not least for the environment – dependent on infrastructure projects.  Growth based on construction and on privatization-funded foreign credit only worsens the current account deficit and raises the debt burden.

Turkey needs to become industrially more competitive, producing higher-value products that compete successfully on the global market. That requires a better educated population, as well as policies that encourage a higher level of participation in the work force; women are an underutilized resource. Instead, the AKP’s social conservatism works to discourage women, while the education policies of the party are geared toward raising a “pious youth” that immerses itself in studies of the life of the Prophet Muhammad and the Quran rather than in mathematics or psychics. 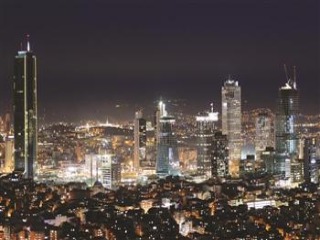 CONCLUSIONS: The turning points in the political journey of the Turkish republic were all products of capitalist development; they translated the class dynamics of capitalism, corresponded to the needs of and mirrored the power of the bourgeoisie, the dominant class of the country. That was the case with the transition to multiparty democracy in 1946-1950, with the military coups in 1971 and 1980, and with the ascent of the AKP to power, the most successful bourgeois party of the republic.

However, as the AKP has increasingly veered toward a religious conservatism that does not provide for the needs of the kind of advanced capitalism to which Turkey will have to accede if it is to sustain economic growth, it has ceased to be a vehicle of capitalist development. If the ninety years of the Turkish republic is any guide, then capitalism can be expected to produce another political remedy to its predicament.

More in this category: « Revolution and Counter-Revolution: Kemalism, the AKP and Turkey at 90 Erdogan and the Challenge of Coping with Change »
back to top